The biographical drama is an exclusive peek into the life of this public figure as she grapples with the unbearable pain in her most vulnerable yet graceful avatar. 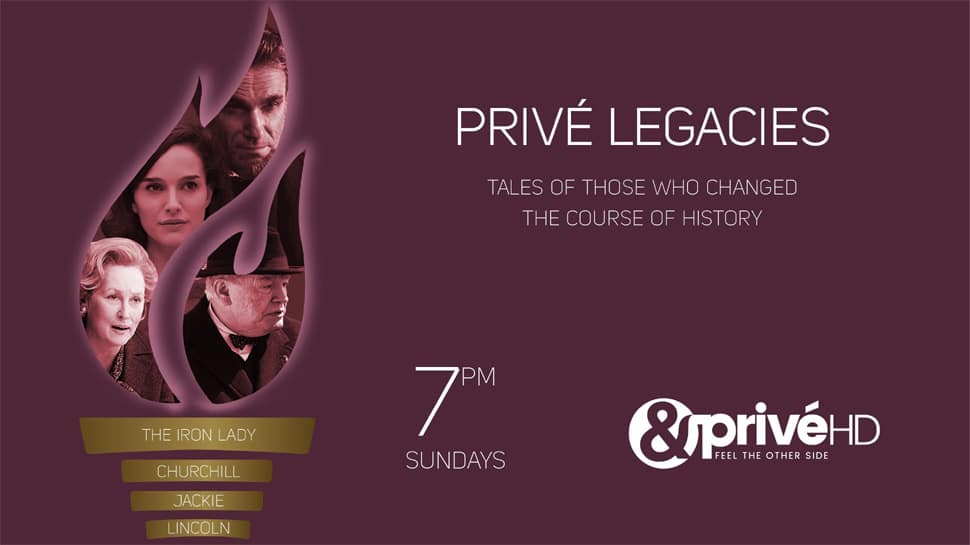 What are great leaders made of? Is it their innate ability to inspire or their transformational journeys that make them true legends? Witness the stories of the greatest individuals and revered role models who shaped the course of history – Winston Churchill, Abraham Lincoln, Margaret Thatcher and Jacqueline Kennedy, as they challenged all norms and stood fearless in the face of adversity.

Bringing a riveting account of the lives of these notable luminaries, that truly leave you awe-inspired, &PrivéHD, the premium destination for nuanced cinema, is set to launch Privé Legacies starting August 4 on Sundays at 7 PM.

A leader who compelled an entire country to embrace equality, a man who scripted Britain's most defining moment in history and a woman who changed the world's power narrative; Privé Legacies on &PrivéHD showcases critically-acclaimed biographical movies such as Jackie, Churchill, The Iron Lady and Lincoln.

Having received immense acclaim across the globe, these award-winning movies enable viewers to feel the other side of the most defining moments in history, showcasing the lives of eminent personalities whose contribution to the people knows no bounds. With a celebrated cast comprising Daniel Day-Lewis, Meryl Streep, Brian Cox the movies promise to leave you inspired, moved and motivated to have a voice of your own and stand for what is right come what may.

With three Academy Award, nominations and multiple awards won, Jackie follows the life of First Lady Jacqueline Kennedy, essayed by Natalie Portman, as she struggles to cope with the 1963 assassination of her husband and President John F. Kennedy.

The biographical drama is an exclusive peek into the life of this public figure as she grapples with the unbearable pain in her most vulnerable yet graceful avatar. The movie will air on Sunday, August 4 at 7 PM on &PrivéHD.

Set against the backdrop of World War II, Churchill is a war-drama that brings to the fore an incredible story of Britain's Prime Minister Winston Churchill. The movie is a true-to-life biopic and docudrama that unfolds during the 96 hours that lead up to D-Day – the imminent invasion of Normandy. Directed by Jonathan Teplitzky the film stars Brian Cox in his powerful portrayal of the Prime Minister along with Miranda Richardson and John Slattery in supporting roles. The movie will air on Sunday, August 11 at 7 PM on &PrivéHD.

An outsider who fought her way in, a rebel who never backed down and a woman who truly made her presence felt and how - Margaret Thatcher is truly a force to be reckoned with. Bringing alive her journey and tracing her path to becoming the first ever female and longest-serving Prime Minister of the United Kingdom of the 20th century, The Iron Lady on &PrivéHD is a must-watch. Portrayed by the Meryl Streep in one of her finest performances, the actor received her 17th Oscar nomination and went on to win the prestigious Academy Award for 'Best Actress in Leading Role.' The movie is set to air on Sunday, August 18 at 7 PM on &PrivéHD.

'The dead should not have died in vain' - a dialogue from the film which aptly depicts Lincoln's sole purpose – to abolish slavery and reunite his country. Against all odds, the movie features how the American President combines passion, humanity and political skill to fight resistance and emancipate the slaves as he forged his legacy for the rest of time. A man of courage, acumen and fortitude, Abraham Lincoln's journey to greatness is a story that truly deserves to be told. The biographical drama will air on Sunday, August 25 at 7 PM on &PrivéHD.

For those who appreciate nuanced cinema, &PrivéHD brings riveting and award-winning films that stimulate the minds and bring alive the other side of cinema with Zee Prime English HD Pack comprising - &PrivéHD, Zee Café HD, &flix HD, LF HD is priced at Rs 25/-