The 29-year-old is seeded fourth at the St Jakobshalle, where the home favourite and top seed Roger Federer is bidding for an eighth title. 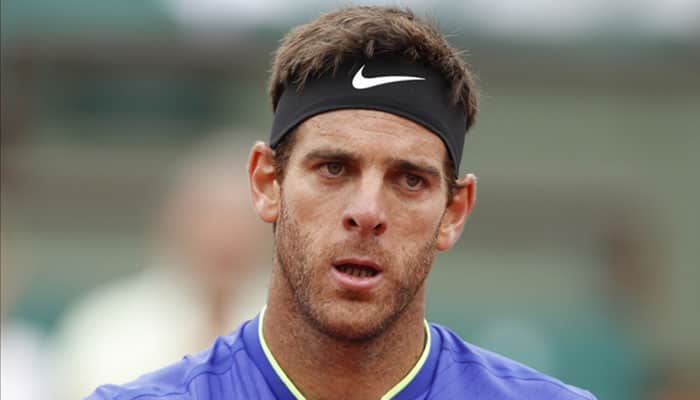 Basel-Stadt: Juan Martin del Potro is looking to build on his recent momentum at the Swiss Indoors this week, as the injury-plagued Argentine bids to snatch a place for next month's ATP Finals in London.

The former US Open champion said on Tuesday that the left wrist on which he fell hard a fortnight ago in a Shanghai semi-final loss to Roger Federer is not giving him problems.

The 29-year-old is seeded fourth at the St Jakobshalle, where the home favourite and top seed Federer is bidding for an eighth title.

Del Potro showed that his fitness problems are behind him by beating Grigor Dimitrov to win his second straight Stockholm Open title at the weekend.

He will start his Basel campaign against Portugal's Joao Sousa on Wednesday.

"I`m not thinking of London, it was not one of my goals this year. I know I`m getting closer, I`m just fighting to win all my matches.

"My goal is to play a good tournament here," he said of the Swiss event where he lifted titles in 2012 and 2013, beating Federer in both finals.

"I will see how far I can move (in the points race to London).

"I must also see how I feel for Paris (next week's final Masters tournament of the season). I will be playing for four straight weeks, that`s something I`ve not done for three or four years."

Del Potro, who has undergone multiple wrist surgeries and missed months of play in recent seasons, stands a provisional 14th in the points chase with two weeks remaining in the regular season.

Out of the possible qualifiers, he stands 11th, as Andy Murray, Novak Djokovic and Stan Wawrinka have all ended their seasons due to injuries.

Del Potro is 470 points behind Pablo Carreno Busta, who currently holds the eighth and final spot for London, with 500 points available to the Basel champion.

"My goal for the year is to play healthy, I think I'm doing well," Del Potro said. "I've been playing without pain in the wrist ever since Shanghai.

"Playing without pain is the most important thing for me. I've also been improving my backhand.

"I'm playing good tennis, but I can play even better if I feel strong with my body."