At 1.5 meters or almost 5 feet, here was what is now - possibly - the biggest jellyfish ever spotted anywhere in the world. 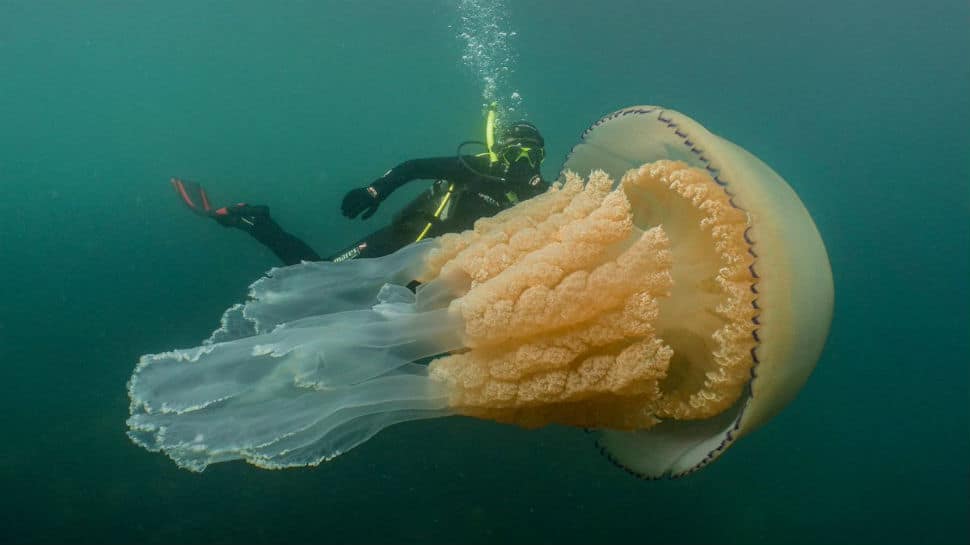 This photo was tweeted by @LizzieRDaly
Share:
Written By:

When Lizzie Daly took a dive off Cornwall on the English coastline, she had hoped for an encounter with a jellyfish which are known to frequent the seas here. What the marine conservationist was not prepared for, however, was the sheer size of one such jellyfish she encountered.

At 1.5 meters or almost 5 feet, here was what is now - possibly - the biggest jellyfish ever spotted anywhere in the world.

Daly had taken a dive along with her cameraperson Dan Abbott as part of Wild Ocean Week when the two noticed a peach-coloured organism moving in towards them. It did not take them long to figure that here was a barrel jellyfish making its way towards them. Soon enough, the enormity of the jellyfish became all too apparent. "We weren't expecting anything. It was an absolute delight to get that experience," Daly was quoted as saying by Washington Post.

Abbott too was equally taken aback. And equally delighted. "My first reaction was that I've never seen a jellyfish that size in my life," he said.

Both Daly and Abbott have said that they were surprised but never scared and eventually even swam in close proximity to the jellyfish.

Marine biologists are aware that in the open seas, a barrel jellyfish can grow quite large but the one observed - and captured on tape - by Daly and Abbott was even bigger than usual.