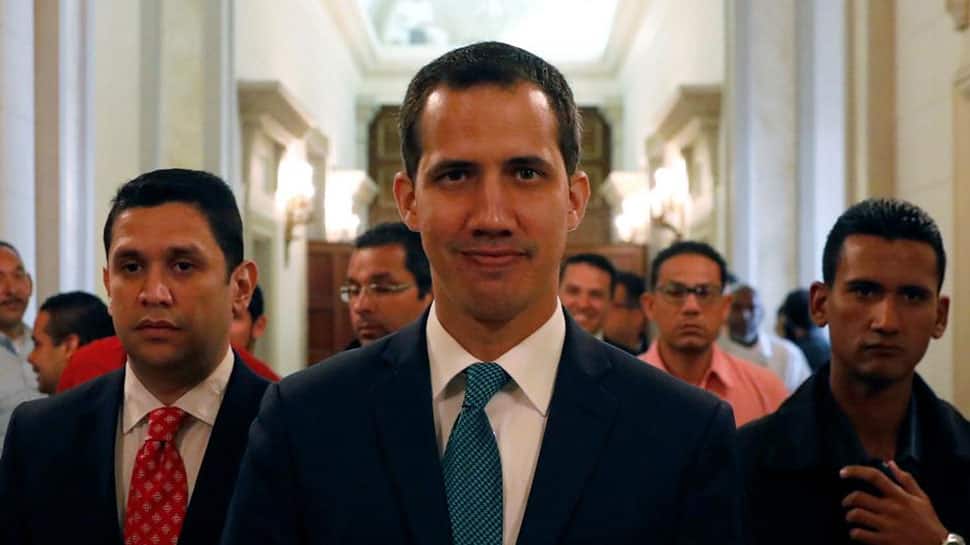 CARACAS: Opposition leader Juan Guaido faced a key test of support on Wednesday after calling for the "largest march" in Venezuela`s history to try to dislodge President Nicolas Maduro, even as the military has so far resisted calls to help remove him.

Guaido on Tuesday urged the armed forces to support his effort to oust Maduro and appeared outside an air force base with dozens of National Guard members.

But there were no concrete signs of defection from the armed forces leadership, despite a years-long deep economic crisis and support for Guaido from the United States and other Western nations.

"Today we continue," Guaido wrote in a post on Twitter early on Wednesday. "We will keep going with more strength than ever, Venezuela."

The size of the planned street protest in Caracas will provide a test for Guaido, amid frustration among some supporters that Maduro remains in office more than three months after the opposition leader - who heads the National Assembly - invoked the constitution to assume an interim presidency, arguing that Maduro`s 2018 re-election was illegitimate.

While Guaido earned the backing of the United States and most Western countries, the armed forces have stood by Maduro, who retains the support of allies like Russia, China and Cuba.

That has frustrated Guaido`s bid to assume the day-to-day functions of government on an interim basis - which he says would be a prelude to calling new elections.

More than 100 people were injured in anti-Maduro protests on Tuesday. Tens of thousands of people marched in Caracas in support of Guaido, clashing with riot police along the main Francisco Fajardo thoroughfare.

Russia on Wednesday denied a comment by U.S. Secretary of State Mike Pompeo a day earlier that Maduro was prepared to leave the country but nixed his plan after Russia intervened. A spokeswoman for Russia`s foreign ministry told reporters the comments were part of an "information war."

Bolton, a hawk on Venezuela, made clear that Moscow`s interference was not welcome.

"This is our hemisphere," he told reporters outside the White House. "It`s not where the Russians ought to be interfering. This is a mistake on their part. It`s not going to lead to an improvement of relations."

The White House National Security Council scheduled a meeting for Wednesday afternoon to discuss next steps on the political turmoil in Venezuela, and acting Defense Secretary Patrick Shanahan canceled a trip to Europe because of Venezuela.

In a television interview Wednesday, Pompeo said U.S. military action was "possible" in Venezuela but that the Trump administration would prefer a peaceful transfer of power.

Venezuelan living standards have declined even further in the first several months of the year, with blackouts and water shortages adding to hyperinflation and chronic shortages of food and medicine that have prompted millions to emigrate.

"I hope this will be the last time we have to take to the streets," Claudia Riveros, a 36-year-old bakery worker carrying a Venezuelan flag said during Tuesday`s protest. "I want to see the end of this usurping government."

"Tomorrow, the first of May, we will have a large, millions-strong march of the working class," Maduro said in a television address on Tuesday. "We have been confronting different types of aggression and attempted coups never before seen in our history."

Elsewhere in Latin America, millions of Cubans took to the streets on Wednesday to protest new sanctions imposed on the Caribbean island by the Trump administration and U.S. efforts to topple the government of socialist ally Venezuela.

The annual marches across the Communist-run country, marking International Workers Day, provided the first opportunity to publicly protest a U.S. offensive against socialism in the region declared by Bolton late last year.

Brazil`s right-wing President Jair Bolsonaro said he had received information of fractures within the Venezuelan army that could lead to the "collapse" of Maduro`s government.

Opposition leader Guaido`s choice of International Workers` Day for a major march comes as he is making appeals to union leaders and public workers, a traditional base of support for Maduro and his predecessor and mentor, the late President Hugo Chavez.

"If he does get some degree of participation from labor movements, then that can be an additional feather in his cap," said Risa Grais-Targow, the Latin America director at Eurasia Group consultancy in Washington, adding that the march would be "a significant barometer of his support and capacity to mobilize."

The Venezuelan opposition have often staged huge street protests against Maduro but have failed to dislodge him.

Tuesday`s protests were also energized by the reappearance of firebrand opposition politician Leopoldo Lopez, who had been serving house arrest since 2017. Spain`s acting prime minister’s office on Wednesday confirmed that Lopez and his family were in the country`s diplomatic residence in Caracas. Lopez had briefly sought refuge at the Chilean diplomatic residence in Caracas on Tuesday.