Merciless slaughtering of Hazaras in Balochistan: A tale of continued persecution

These poor miners belonged to the Hazara community. The miners were killed in a barbarous manner, where their hands were tied, and throats were slashed after blindfolding them. 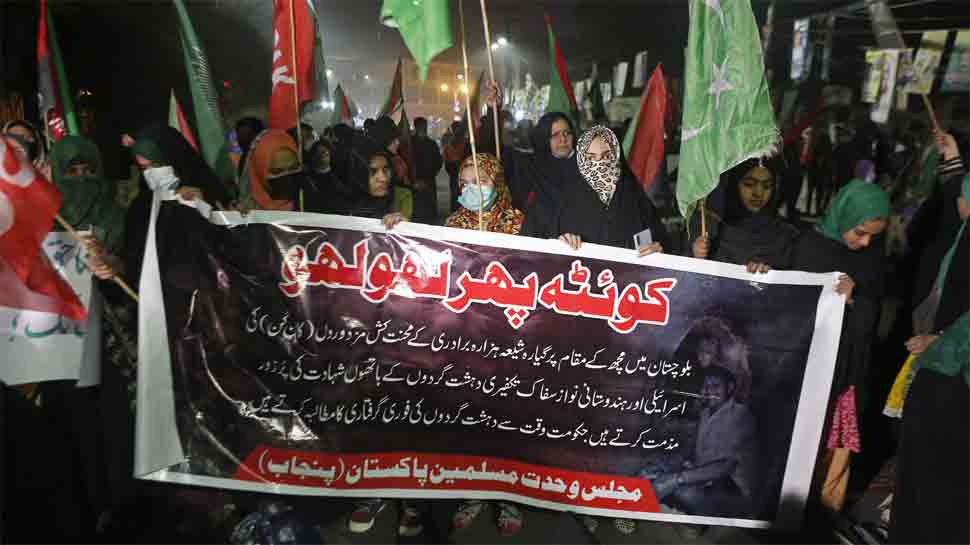 ISLAMABAD: Minorities have continued to be the favourite target of Islamist Sunni hardliners in Pakistan. This time terrorists from the Islamic State have committed Hazara genocide. A recent spurt in anti-Shia violence was seen in Pakistan, wherein a cowardly incident on Sunday (January 3), 11 miners were killed and many others were injured in a terrorist attack in Machh, Balochistan.

These poor miners belonged to the Hazara community. The miners were killed in a barbarous manner, where their hands were tied, and throats were slashed after blindfolding them. This was a clear case of target killing against minorities as local newspaper The Balochistan Post reported that the terrorist surrounded the mines and abducted the miners after identifying them as Hazaras. Additionally, 4 other miners were injured in the indiscriminate firing by the terrorists. Reuters later reported that the attack was carried out by the terrorists from ISKP,backed by ISI, who have claimed the responsibility for this barbarism.

The killings have come at a time when the Pakistan’s army is engaged in killing Baloch activists in a regular manner. The precursor to Sunday's violence were majorly visible, where a globally known nexus of ISI,Pakistani Army and its sponsored terror outfits have been active towards their goal of riding on the wave of fanatic religiosity and jingoism in Pakistan. It should be noted that the Pakistan's army has been actively engaged in quelling the voices of dissent from the region. The killing has been condemned by many notable Baloch voices, who see the presence of such religious fundamentalist forces in the region as a Pakistani army supported venture. Baloch activists from the region have called this attack an attempt to create fear amongst the people, who are fighting for the basic human rights in Balochistan.

Hazaras have faced the heat of sectarian violence all over Pakistan. A large number of killings have happened primarily in Balochistan , where the Hazaras  form a significant part of the demography. As per the report published by the Home Office of the Government of UK, till 2019, a total of 2,000 Hazaras have been killed in different waves of sectarian violence by Islamic State, Tehreek-i-Taliban and Lashkar-e-Jhangvi. The Hazaras are also easily profiled out by the terrorists and security forces due to their distinct physical features. They also have faced public discrimination by being referred to as “heretics”. Lashkar-e-Jhangvi has been holding anti-Shia rallies, handing over anti-Shia and ant Hazara leaflets in Balochistan, they have also been found to be engaged in drawing of anti-Hazara graffities on the walls in Quetta, thus trying to create a public hatred against the community.

The possibility of such a dastardly attack on the Hazaras was already anticipated and conveyed to the world in 2020 only, when human rights activist Derakhshan Qurban Ali had expressed her concerns on the rising statue of Sunni terrorist groups in the region, including ISKP and Taliban, who have previously also engaged in the terror attacks on Hazaras. On the lines of these religiously motivated terror outfits, many anti-Shia terrorist organizations like Sipah-e Sahaba have gradually emerged with new names and a larger fanatic base.

In the wake of terrorist attacks on Hazaras, prominent journalist from the newspaper Dawn, Mubashir Zaidi, in a tweet cornered the Pakistani government in failing to provide security to its citizens and called out the popular gimmick used by Pakistan, of accusing India for its own security failures and using the anti-India sentiment as a scapegoat from the situation. Similarly, the Baloch political parties have extended their support and condolences to the families of the slain miners. The families of slain miners have continued the demonstration with the bodies on the Western bypass in Quetta and blocked the national highway in Machh. Even after multiple terrorist attacks, the plight of Hazaras in Pakistan has repeatedly failed to fetch the attention of India’s human rights defenders, who claim to be the messiah of human rights all over the world.

The Hazaras face the risk of persecution every time they go out of their designated settlement areas. The report by the Home Office of government of UK also mentioned the deliberate delay by the officials from Pakistani agency, National Database and Registration Authority (NADRA), in issuing the Computerized National Identity Cards (CNICs) to the Hazaras, thus creating difficulties for them in accessing basic needs such as education,healthcare and employment.

Over the time the sectarian violence against the Hazaras has led to many of the male members of families being killed, further the ghettoization of the community has made them unable to find means to sustain themselves.The Hazara community has been confined to ‘open jails’ where the basic means of sustenance are not available. The government has failed in its promise to grant the basic necessities to the community, which also faces restrictions of movement owing to the security threats. This has led to development of another gendered issue in the region, where the women who lead such households, where there is no male member alive to earn bread, have to step out as breadwinners for their family in an extremely hostile environment.

Pakistan has a proven track record of not only denying minority rights but also making them socially vulnerable to persecution and fanatic mob lynching. Countless young women from minority communities like Hazaras, Hindus, Sikhs and Christians have been abducted, raped and converted, while their families have been tortured by Islamist hardliners and weird rulings by the courts. Facing the same fate, the persecution of Hazaras is a worrying cause, in an increasingly fanatic environment where political parties like Tehreek-e-Labbaik have started to gain support and momentum, the future of religious, linguistic and ethnic minorities seems too grim in Pakistan.

Pakistan has assured safeguarding of minority rights to many international organizations, but it has repeatedly and deliberately failed on its promises and has resorted to reap out the political benefits from internal hatred, While it often tries to propagate some unfortunate instances of random frictions in India as the acts of oppression against minorities, time has come for Pakistan to correct its wrongdoings and face the questions arising in the geopolitical arena regarding its treatment of minorities. The ongoing Baloch genocide, the targeting of Hindu temples, Christian churches and Ahmedi mosques raise serious question on what message Pakistan wants to give to its minorities.