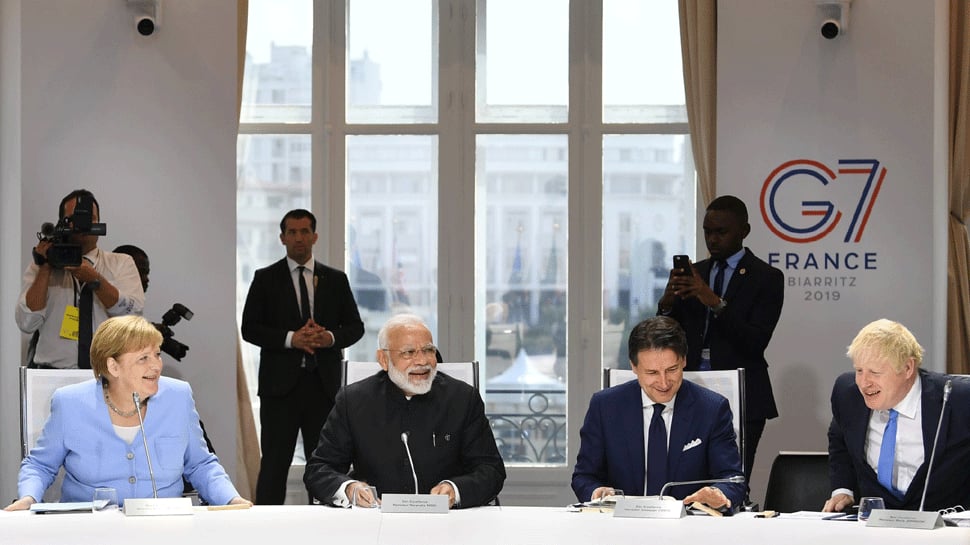 Addressing the dedicated session, PM Modi highlighted India's large scale efforts towards eliminating the use of single-use plastic, tackling water pollution and stress on water, harnessing solar energy and, protecting flora and fauna to ensure a sustainable ecology of the world.

At the @G7 Summit in Biarritz, I addressed the session on ‘Biodiversity, Oceans, Climate.’ Highlighted India’s large scale efforts towards eliminating single use plastic, conserving water, harnessing solar energy and, protecting flora and fauna for a sustainable future. pic.twitter.com/djS5ksgVEZ

PM Modi on Monday was scheduled to meet four world leaders and participate in two sessions at the G7 summit in Biarritz, on the last day of his three-nation tour. PM Modi was slated to meet US President Donald Trump, Senegal President Macky Sall, German Chancellor Angela Merkel and President of Chile Sebastian Pinera. The other session in which PM Modi will be participating is on Digital Transformation.

On Monday, PM Modi met US President Donald Trump and categorically stated that there was no space for any country to mediate between the bilateral issues facing India and Pakistan.

President Trump shook PM Modi hand, too, while the two were facing questions from media and the two leaders laughed, signalling that they understood each other well. "I am here and have a good relationship with great leaders, and I believe they can resolve the issues," said Trump.