An exit poll by pollster IPSOS showed PiS heading towards its best result ever in a general or European Union election with 42.4 per cent of votes. 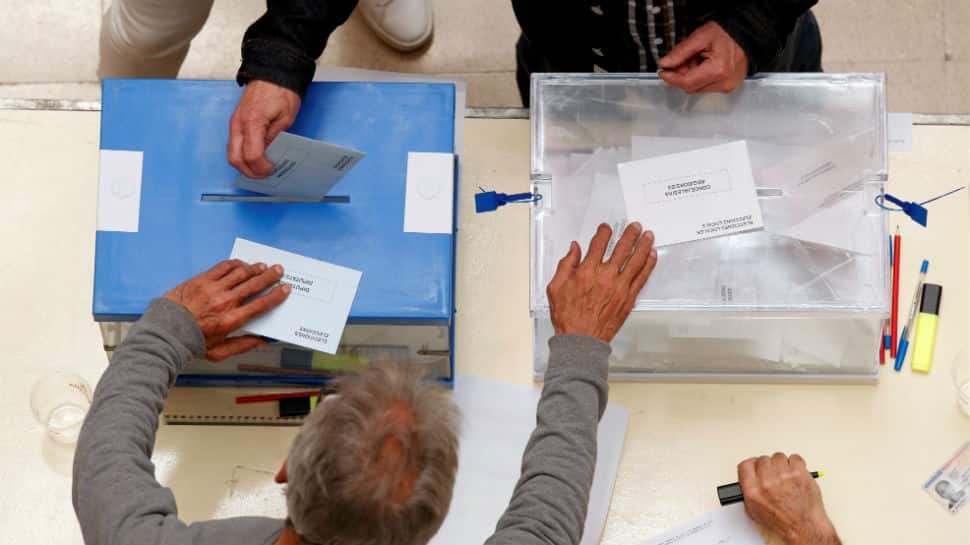 A man casts his votes for the European Parliament and local elections at a polling station in Barcelona (Image courtesy: Reuters)
Share:
Updated:
May 27, 2019, 11:49 AM IST
Source:
Reuters

WARSAW: Poland`s ruling Law and Justice party (PiS) came out narrowly ahead in Sunday`s European Parliament vote, seen as test of the party`s nationalist, eurosceptic platform before a national election later in the year.

An exit poll by pollster IPSOS showed PiS heading towards its best result ever in a general or European Union election with 42.4 per cent of votes. It won 31.8 per cent in the EU ballot five years ago and 37.6 per cent in the 2015 parliamentary election.

The opposition European Coalition, comprising the Civic Platform formerly led by European Council President Donald Tusk and a group of leftist and rural politicians, scored second with 39.1 per cent.

If projections are confirmed by official results, the strong showing by PiS will bolster a growing chorus of populists in Europe who share the broad goal of returning power to EU member states and strict limits on immigration.

Voter turnout stood at 43 per cent, a record high for a European election in Poland, following an acrimonious campaign dominated by issues such as gay rights, the legacy of the Holocaust in Poland, and the role of the Catholic Church in public life.

PiS had framed the European ballot as a battle against western liberal ideals, which it says threaten the traditional way of life in Poland, a staunchly Catholic country.

Another term in office for PiS following the national vote in October or November could deepen Poland`s isolation in the European Union amid criticism that the party is tilting towards authoritarian rule.

"We have to remember, the decisive battle for the future of our homeland will take place in the autumn," PiS leader Jaroslaw Kaczynski told party supporters after exit poll results were published.

Kaczynski said ahead of the European election that in casting their votes Poles would be deciding on the "preservation of family values, ... the future of Polish tradition and the Church in our country," according to an interview with the ultra-conservative Gazeta Polska weekly.

A progressive party set up by Poland`s first openly gay lawmaker, Robert Biedron, garnered 6.6 per cent. Launched in February, Biedron`s Spring wants to sever any ties between the state and the Catholic Church in Poland, liberalise the nation`s strict abortion laws and phase out coal mining.

"The success of PiS is part of a broad cultural divide across the world," said Jaroslaw Flis, a sociologist with the Jagiellonian University in Krakow.

"It`s a divide between those who advocate economic solidarity and uniformity of values, meaning they are socially conservative and support the welfare state, against those who back economic and social liberalism."

Some observers had said PiS could suffer in the election following the release of a documentary film about paedophilia in the Catholic Church, which has close ties with the party.

In the run-up to Sunday`s vote, senior PiS officials, including Prime Minister Mateusz Morawiecki and Kaczynski travelled to rural communities, vowing to ensure gay couples will not be allowed to adopt children and that Poland would not join Europe`s single currency for years.

Poles are among the most pro-EU nations in the bloc, in part because of massive aid Poland receives from the bloc. PiS focused its campaign on stoking fears against the euro, telling voters adopting it would raise consumer prices.

Not all voters bought the argument.

"I vote for Biedron`s party. I feel first and foremost a European. We need to defend the EU against a wave of totalitarianism," said Marcin Matecki, a 46-year-old psychologist voting in Warsaw.

PiS party also pledged to oppose any claims for compensation for Jewish property seized during World War Two, an issue that became a focal point of the campaign following efforts in the United States to address restitution.