Tens of thousands of protesters marched through central Hong Kong on Sunday wearing face masks in defiance of colonial-era emergency powers which threaten them with a year in prison for hiding their faces. 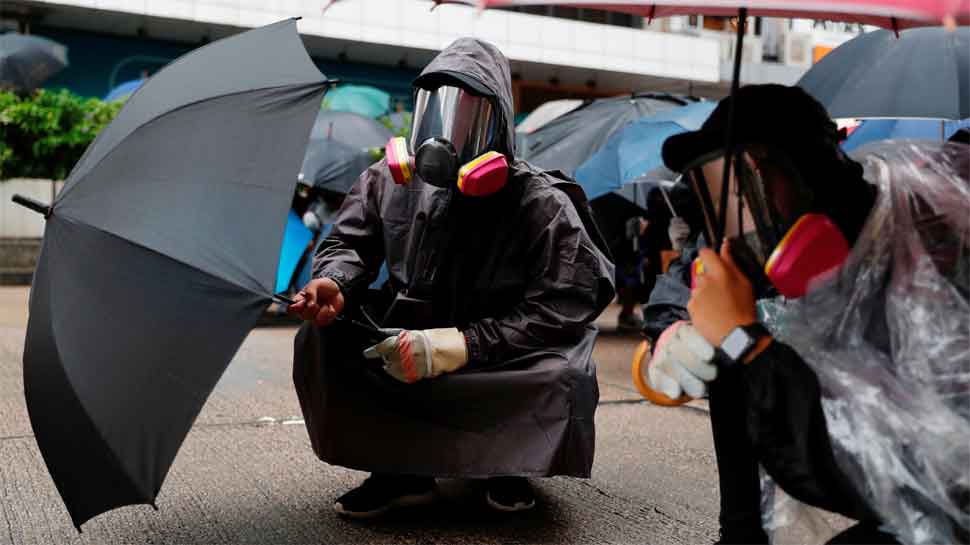 HONG KONG: Tens of thousands of protesters marched through central Hong Kong on Sunday wearing face masks in defiance of colonial-era emergency powers which threaten them with a year in prison for hiding their faces.

Police fired tear gas in several places in the Asian financial hub but there was no obvious signs of violence, with protesters ignoring the gas, dousing the canisters with water or tossing them back at police.

"Members of the public are advised to stay indoors and keep their windows shut," the police said in a statement. Authorities are braced for two major protests on Sunday, fearing a recurrence of Friday night`s violent protests which saw the Asian financial centre virtually shut down the next day.

"The anti-mask law just fuels our anger and more will people come on to the street," Lee, a university student wearing a blue mask, said on Sunday, as he marched on Hong Kong island. "We are not afraid of the new law, we will continue fighting. We will fight for righteousness. I put on the mask to tell the government that I`m not afraid of tyranny."

Hong Kong`s four months of protests have plunged the Chinese-ruled city into its worst political crisis in decades and pose the biggest popular challenge to Chinese President Xi Jinping since he came to power six years ago.

What started as opposition to a now-withdrawn extradition bill has swelled into a pro-democracy movement against what is seen as Beijing`s increasing grip on the city, undermining its "one country, two systems" status promised when Britain handed Hong Kong back to China in 1997.

China dismisses the accusation, saying foreign governments, including Britain and the United States, have fanned anti-China sentiment. Protesters on Sunday chanted "Hong Kongers, revolt" and "Fight for freedom, stand with Hong Kong", as riot police monitored them from overhead walkways and footbridges, some taking photographs and filming the marchers.

Police fired tear gas at a rally at Pacific Place which seemed peaceful and also at Admiralty, near government offices, said witnesses. Some roads clogged with protesters resembled a field of flowers, with thousands of colourful umbrellas. Umbrellas are a symbol of an earlier pro-democracy movement, but were being used on Sunday simply to keep off the rain.

The current "precarious situation", which endangered public safety, left no timely solution but the anti-mask law, Matthew Cheung, Hong Kong`s chief secretary, wrote on his blog on Sunday. He urged people to oppose violence ahead of grassroots district council elections set for Nov. 24.

Rail operator MTR Corp Ltd <0066.HK> said it would not open some stations on Sunday, after an unprecedented shutdown following Friday night`s violence. It said it needed time to repair vandalised facilities and would cut short operations by more than three hours, to end at 9 p.m.

Most supermarkets and commercial stores reopened after the previous day`s closures, though some malls, such as Sogo in the bustling Causeway Bay commercial district and IFC in Central, remained shuttered.

Global luxury brands from Prada to Cartier are counting the costs as the unrest has kept tourists away, taking retail sales down 23% in August, their biggest decline on record. Many restaurants and small businesses have had to shut repeatedly, with the protests pushing Hong Kong`s economy to the brink of its first recession in a decade.

Financial Secretary Paul Chan in a blog on Sunday said despite recent obstacles, the banking system remained sound and the financial market was functioning well. Hong Kong may have lost as much as $4 billion in deposits to rival financial hub Singapore from June through August, Goldman Sachs estimated this week.

"Hong Kong will not implement foreign exchange controls. The Hong Kong dollar can be exchanged freely and capital can come in and out freely. This is the solemn guarantee of the Basic Law," said Chan.

Protesters have taken aim at some of China`s largest banks, trashing automated teller machines at branches of Bank of China Ltd`s <601988.SS> <3988.HK> Hong Kong unit, for example, while nearby international counterparts, such as Standard Chartered PLC , have escaped untouched.

Chan`s comment came after Hong Kong`s Monetary Authority said about 5% of the city`s ATMs could not transact cash withdrawals for "various reasons". The Hong Kong Association of Banks condemned violent acts "which have caused serious damage to some bank branches and ATMs".