KP Sharma Oli was on Thursday sworn in as Nepal's Prime Minister for the second time. 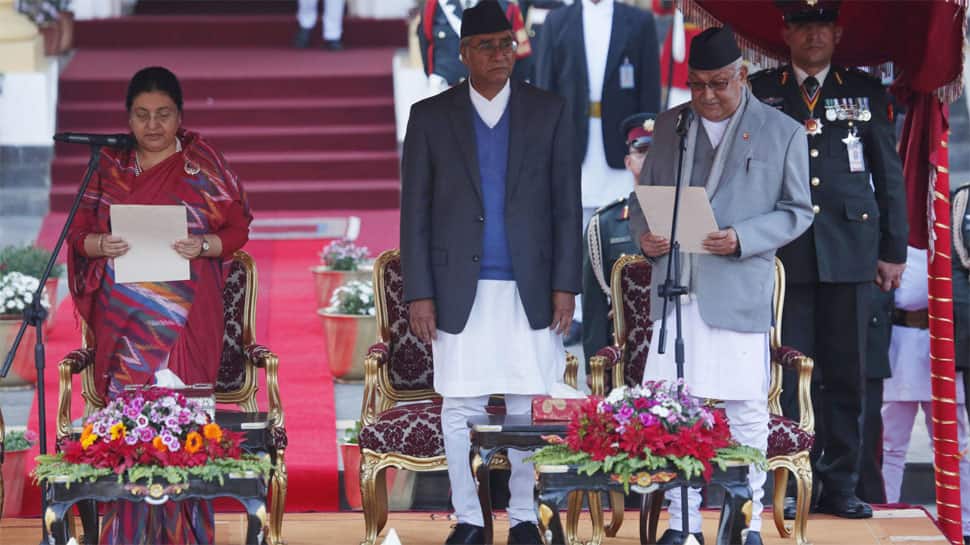 Kathmandu: KP Sharma Oli was on Thursday sworn in as Nepal's Prime Minister for the second time, weeks after his Left alliance with CPN Maoist swept the historic parliamentary polls, kindling hopes for much-needed political stability in the Himalayan nation.

President Bidya Devi Bhandari administered the oath of office and secrecy to 65-year-old Oli and two other ministers - both from the CPN-UML - at a function held at President’s Office, Shital Niwas, in Maharajgunj.

Oli is the 41st prime minister of Nepal.

Earlier, there were reports that leaders from the CPN Maoist, another member of the Left Alliance, would also join the cabinet.

According to sources close to the Maoist party, the Maoist leaders did not take oath after their demand for the portfolio of the deputy Prime Minister was turned down by Oli.

It is learnt that CPN-UML general secretary Ishwor Pokharel was aspiring for the post of deputy Prime Minister in the new cabinet.

UML leaders Lal Babu Pandit and Thum Maya Thapa have been given the portfolios of Minister for Population and Environment, Minister for Women and Children respectively.

Oli's party CPN-UML secured 121 seats in the 275-member Parliament and became the largest party. The Nepali Congress has 63 seats while the CPN-Maoist Centre secured 53 seats.

Oli needs the support from the Maoist party led by Prachanda to prove the majority in the house.

His failure to include Maoist ministers during today's swearing-in ceremony raises question about the longevity of the new government, especially at a time when the two communist parties are in the process of unification, political observers say.

His PM candidacy was supported by the CPN-Maoists, Rastriya Prajatantra Party Nepal, and Madhesi Rights Forum-Democratic along with 13 other small parties.

Earlier, former prime minister and Nepali Congress president Sher Bahadur Deuba had addressed the nation and submitted his resignation to the president.

Deuba was elected as the 40th Prime Minister on June 6 with the support from CPN (Maoist Centre) which is now a part of Left alliance.

"The elections of three tiers of government have been successfully held under my leadership setting the foundation to long transition," Deuba said in the television address.

The Left alliance of the CPN-UML, led by Oli and CPN-Maoist Centre, led by Prachanda, secured almost two third majority in the Parliament during the parliamentary elections.

The elections were seen as the final step in Nepal's transition to a federal democracy following a decade-long civil war till 2006 that claimed more than 16,000 lives.

In 2015, when Nepal adopted a new Constitution that split it into seven states, dozens of people were killed in ethnic clashes over territory and rights.

Following the adoption of the new Constitution, the ethnic Madhesi group, mostly of Indian-origin, protested for months, saying they were not getting enough territory in one of the provinces and were also facing discrimination.

The polls are said to be a step forward in cementing democracy and providing political stability to Nepal, which has seen 10 prime ministers in as many years.

Oli had served as deputy prime minister during the then interim government led by Girija Prasad Koirala in 2006 after the successful conclusion of the second Peoples Movement. He was elected as a member of Parliament in the House of Representatives for the first time from Jhapa district in 1991.

He had also served as Minister of Home Affairs in 1994–1995. He was re-elected to the House of Representatives from Jhapa electorate in 1999.