Major exit polls on Saturday gave a slight advantage to Tejashw Yadav-led ‘Mahagathbandhan’ over Janata Dal United-BJP led NDA alliance in the closely contested three-phase Bihar assembly election 2020, the results of which will be announced on November 10. 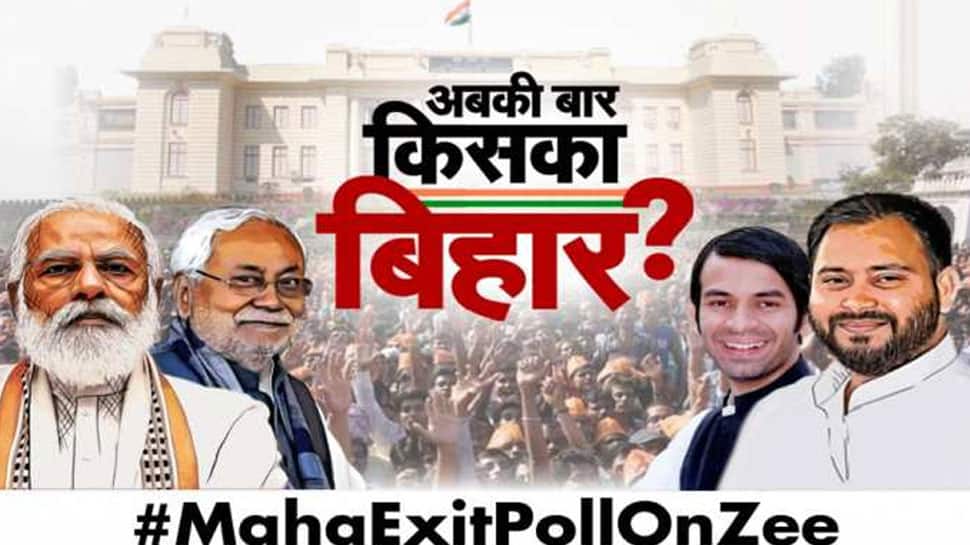 NEW DELHI: Major exit polls on Saturday (November 7, 2020) predicted a big advantage for Tejashw Yadav-led ‘Mahagathbandhan’ over Janata Dal-United and BJP- led NDA alliance in the closely contested three-phase Bihar assembly election 2020, the results of which will be announced on November 10.

Interestingly, while the majority of exit polls predicted the ‘Mahagathbandhan’  wining between 120-130 seats, they estimated NDA to win between 104-110 seats. However, no alliance or party appeared to be getting a majority on its own, leading to a possibility of a hung assembly.

Tejashwi Yadav-led RJD is part of the Mahagathbandhan alliance comprising its old ally, the Congress, besides the Left parties. Meanwhile, Chirag Paswan's LJP is expected to win between 4-8 seats and is likely to emerge as a kingmaker if no party wins an absolute majority in Bihar.

The exit polls are based on the responses of people who have cast their votes. Pollsters, assuming that the voters have correctly revealed their choice, predict the results much before the actual counting of votes begins.

The predictions have been off the mark on many occasions. During the 2015 Bihar assembly elections, only one agency had managed to capture the mood in the state which overwhelmingly voted for an alliance led by chief minister Nitish Kumar with him coming to power for the third consecutive term.

The third and final phase of assembly elections concluded today in Bihar in which stakes are quite high for Chief Minister Nitish Kumar, who is up against multiple rivals, including former ally Chirag Paswan.

He said the figures are likely to increase later tonight with the voting process nearing conclusion. Polling was held in 78 assembly segments of Bihar in the third and final phase of the state elections on Saturday in which 2.35 crore voters were eligible to decide the fate of 1,204 candidates.

Polling in 78 seats began at 7 AM at all 33,782 polling stations where several EVM sets and VVPAT machines were installed and paramilitary forces deployed to maintain order.

This morning, Prime Minister Narendra Modi made an appeal to voters to "set a new record" as polling began in the final phase. PM Modi, who attended 12 rallies during the campaign, had come out with an open letter addressed to the people of the state on Thursday saying he "needed" Nitish Kumar in the state so that the development of Bihar continued unhindered.

Here are the exit poll predictions for Bihar