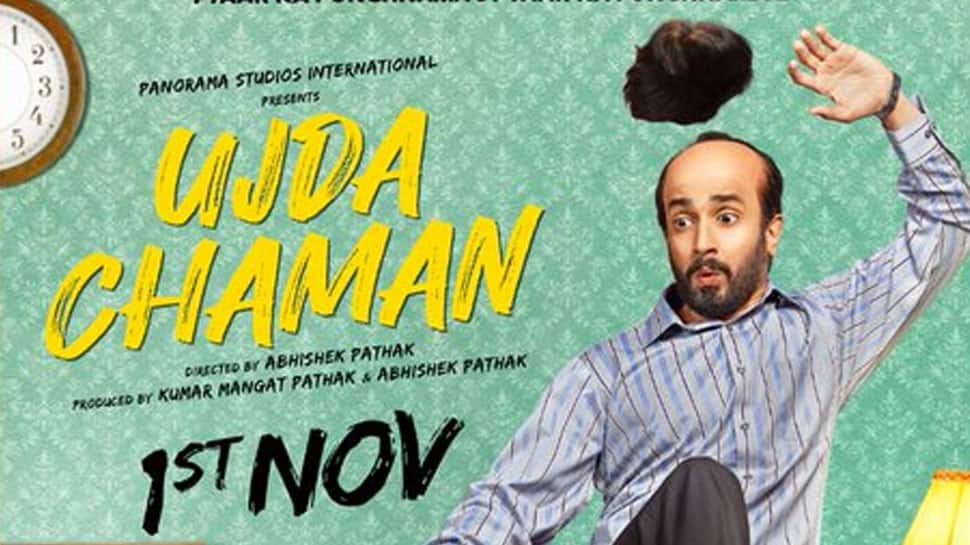 All that glitters is not gold, not certainly a shiny balding pate in the marriage market. Thus realises the film's 30-year-old virgin hero, early on in the film.

He is an unassuming Hindi lecturer at Hansraj College, and the friendly neighbourhood misfit among the loud, spirited Punjabi populace of Delhi's Rajouri Garden. Students shout "takla", girls snub his arranged marriage bids, the family astrologer warns he just might die a celibate, and his father is egging him to join Tinder.

"Ujda Chaman" starts off on that rather unusual note for a mainstream Bollywood comedy, introducing its plot and protagonist with slice-of-life quirk.

If well begun is half done, Abhishek Pathak's debut directorial feature had that advantage. The problem is the film remains half done. After starting off on a breezy note and managing to establish its intention, the narrative shows no signs of tapping the full potential of an interesting subject. Worse, the film loses focus midway.

Before anything, the effort does not necessarily come across as flippant – one that is simply meant to laugh at baldness. "Ujda Chaman" does unfold an expected gag bag of baldy jokes, but the film also uses its basic premise to make a point or two about self-esteem and confidence.

Importantly, the film tries to underline why one must realise that beauty lies in the mindset of the beholder, not necessarily the eyes.

That last bit comes alive through the story of Chaman Kohli (Sunny Singh), our balding hero, and Apsara Batra (Maanvi Gagroo), a rather overweight girl he ‘meets' on a dating app. Far from love at first sight, the two are thinking of ways to escape from each other minutes into their first date. She feels shortchanged because he had cropped his mug smartly enough to hide his baldness in his profile pic. He is none too pleased that overweight people get away without posting full-frame snapshots.

After their first date, although Apsara and Chaman have decided to call it quits, fate serves a spin. They will invariably meet again. Worse, their parents have convinced themselves that the two are in love.

"Ujda Chaman" is an official remake of the 2017 Kannada comedy "Ondu Motteya Kath", and director Pathak's idea to reimagine the story in the Punjabi Delhi milieu of Rajouri Garden is meant to give the rom-com mood and drama quotient a different flavour from what the original served.

The idea would have succeeded had the film not fumbled while trying to retain pace and humour in its post-interval portion. A tighter build-up to the climax would have helped, considering the ending is predictable. Danish Singh's screenplay and dialogues, and Mitesh Soni's editing, demanded sharper execution.

The film's Dilliwaala spirit is credibly set up, primarily through the cinematography of Sudhir K. Chaudhary, and its cast. Sunny Singh, in his first solo role after multistarrers such as "Pyaar Ka Punchnama 2" and "Sonu Ke Titu Ki Sweety", has to contend with a character that clearly needed to be crafted with wit. He struggles to balance Chaman's frustrations and gullibility, although managing to etch a distinctly Delhi image mix-matching formals with sneakers.

Maanvi Gagroo essays her role with understated screen presence, leaving adequate impression as Apsara. Aishwarya Sakhuja, Sharib Hashmi and Karishma Sharma have limited footage but manage to make a mark. Atul Kumar and Grusha Kapoor as Chaman's parents get comic scenes that range from funny to stereotypical. Saurabh Shukla is hilarious in a cameo.

The film benefits from a foot-tapping soundtrack (Guru Randhawa and Gourav-Roshin) but the loud background score to underline its comedy quotient robs the fun factor.

Like the scene where the hero struts into college wearing a wig, "Ujda Chaman" too starts off on a high but goofs up along the way.
(Vinayak Chakravorty can be reached at vinayak.c@ians.in)

Does Preity Zinta have a cameo in 'Dabangg 3'?