Action against pitch invader 'Jarvo69': Fined and banned for life from Headingley

Jarvo, who sports the India whites, has attracted plenty of eyeballs because of his two intrusions but the Yorkshire County Cricket Club is treating this as a case of security breach. 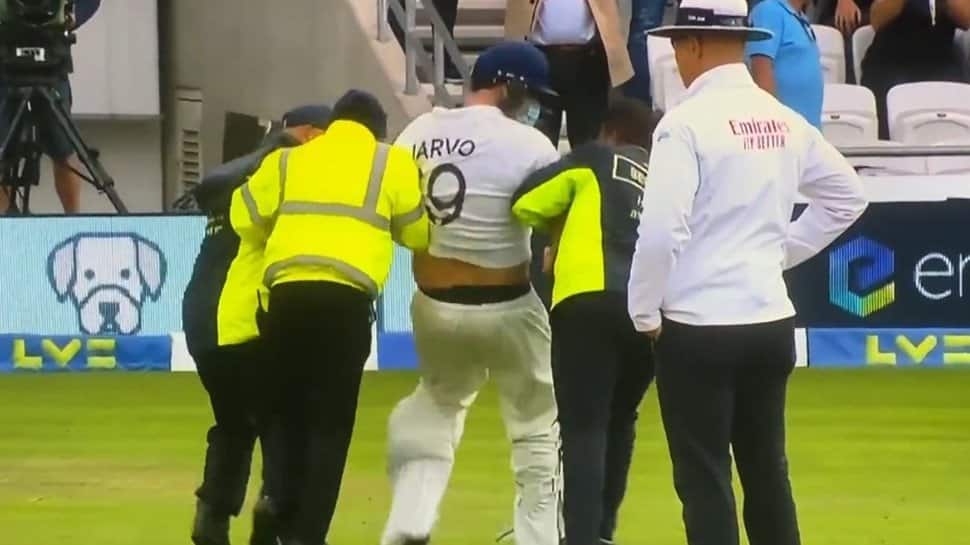 New Delh/Leeds: YouTuber Daniel Jarvis aka 'Jarvo69', who has intruded into the field of play during the last Test match at Lord's and the ongoing Headingley game, will be banned for life on charges of security breach, English county sources said on Saturday.

Jarvo, who sports the India whites, has attracted plenty of eyeballs because of his two intrusions but the Yorkshire County Cricket Club is treating this as a case of security breach and the man in the eye of a social media storm won't be allowed in the Leeds gallery in coming days.

"Yes, Daniel Jarvis will be banned from Headingley for life. We will also be imposing a financial penalty," a Yorkshire CCC spokesperson told PTI when asked how the county deals with this kind of transgression.

Asked what kind of measures will be taken to avoid such embarrassment which has now happened twice, the spokesperson said: "As on previous days, there will be stewards present around there to stop anyone that attempts to get on."

On Friday, just after the fall of Rohit Sharma's wicket, 'Jarvo 69' was seen popping up from the gallery located on one side of the sight screen, wearing batting pads and a blue helmet with a surgical face mask on.

JARVO 69 IS BACK AND READY TO BAT.

Someone from the crowd also threw a cricket bat as he entered the field of play and reached the pitch to take guard when the ground security personnel intercepted him. He was promptly evicted from the Headingley premises.

Earlier, he had also walked his way into the Lord's ground on Day 4 of the second Test between the two sides and was seen setting the field for the Indian team, leaving the spectators and viewers in splits.

At Lord's, the fan, who claims to be a popular prankster, was spotted walking casually on the ground in an Indian jersey with his name on the back. He had to be escorted out and later also revealed how Ravindra Jadeja and Mohammed Siraj reacted after spotting him.

A pitch invader during #INDvENG test match trying to convince the ground security that he is an Indian player. #ENGvIND pic.twitter.com/4ndOdqiL2q

Siraj and Jadeja could barely control their laughter, before the man was escorted off by the security guards.

However, in the post COVID-19 times when the teams are living in a bio-bubble, this kind of security breach could scare the players.

While people have had a good laugh because of 'Jarvo69's antics but the question that many like former India all-rounder Irfan Pathan raised was what kind of reactions would there be if a similar security lapse had happened in India.

"Imagine the outrage if the same guy invade the field twice in India," Pathan had tweeted.

Imagine the outrage if the same guy invade the field twice in India. #wontbefunny

There has been no confirmation whether the Indian team filed any official complaint about the British man but the Yorkshire county's decision to ban his entry into the Headingley premises is a step in the right direction.