India vs Australia, 1st T20I: Here is the report card of Virat Kohli and company

India and Australia will play the series-deciding second and final T20I on Wednesday at M. Chinnaswamy Stadium in Bengaluru. 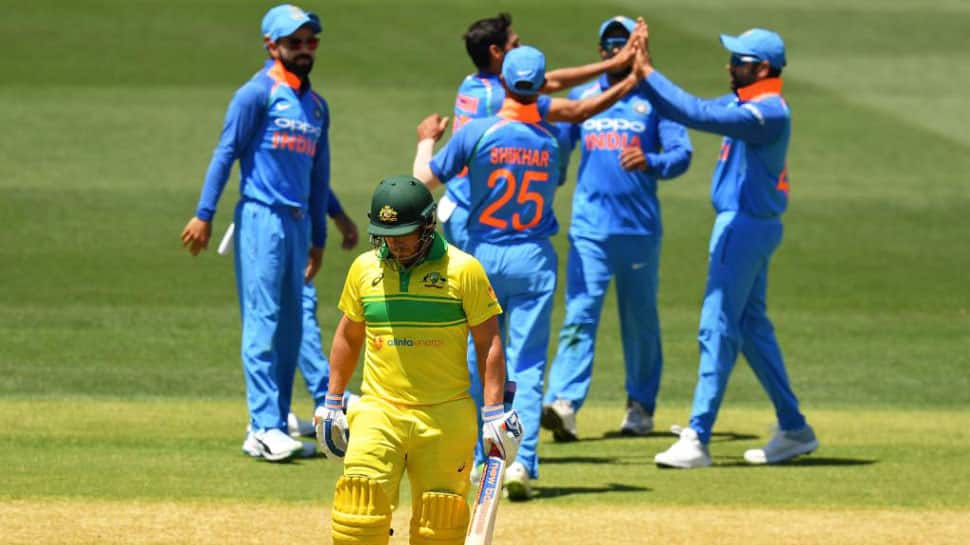 India, who recorded historic ODI and Test series wins against Australia away from home in January, failed to kickstart their home series against the Aaron Finch-led side on a positive note as they slumped to a narrow three-wicket defeat in the opening T20I in Visakhapatnam on Sunday.

Opting to bowl first, Australia restricted India to a score of 126-7 in their stipulated 20 overs, with KL Rahul being the highest scorer for the home side with a 50-run knock.

Besides Rahul, only skipper Virat Kohli (24) and Mahendra Singh Dhoni (unbeaten at 29) reached the double-figure mark while the other five wickets fell in quick successions.

In reply, Jasprit Bumrah (3 of 16 runs) and the spinners tried their best to bring India back into the game at regular intervals, but Jhye Richardson and Pat Cummins held their nerves and amassed 14 runs in the final over by Umesh Yadav to help Australia cross the mark and take an unassailable 1-0 lead.

Let us have the look at the report card of the Indian players from the opening T20I:

Opener Rohit Sharma yet again failed to provide India with a good start, falling for just five runs in the Visakhapatnam T20I. The 31-year-old right-handed batsman went for a premeditated scoop off quick Jason Behrendorff's third delivery in the third over, only to see the ball going straight to Adam Zampa at short-fine leg. Sharma will definitely be keen to make amendments going into the series-decider.

Top-order batsman KL Rahul, who has made a return to India's T20I as well as ODI squad after the controversial sexist row also involving Hardik Pandya, gave a strong message to the national selectors ahead of the ICC World Cup by scoring an impressive half-century. He struck a quick-fire 50 off just 36 balls, laced with six boundaries and a six, before being caught by Aaron Finch at mid-off off Nathan Coulter-Nile's delivery.

Indian skipper Virat Kohli failed to covert his good start into a big score as he fell for just 24 runs. Coming to bat at No.3, Kohli smashed three boundaries and batted at a strike rate of 141.17 in his short cameo at the field. The swashbuckling batsman went back to the pavilion after he flicked a delivery from Adam Zampa aerially straight down to Coulter-Nile at long-on.

Wicketkeeper-batsman Rishabh Pant fell victim of an impressive fielding by Australian fast bowler Jason Behrendorff after scoring just four runs. While fielding at backward point, Behrendorff first dived to collect the ball running at a good pace before throwing it back to keeper to rattle the stumps.

Walking in to bat when India was standing at 80 for three, former Indian skipper and veteran wicketkeeper-batsman Mahendra Singh Dhoni continued to bat at the crease till the final ball while he kept losing partners at regular intervals. He finished with 29 runs off 37 balls.

Besides a decent show with the bat, he once again gave a glimpse of his masterclass behind the stumps when he ran out  Peter Handscomb and D’Arcy Short off just one ball in the 16th over. Handscomb flicked a Umesh Yadav delivery into the leg side before heading for the run.

While taking the second run, Handscomb and Short decided to have a mid-pitch handshake but Dhoni first collected the throw from the deep from Krunal Pandya to hit the batter's one end before handing the ball to Umesh Yadav to dislodge the bail off of the other end.

However, as double play is not allowed, Short made the long walk back to the pavilion after scoring 37 runs off as many balls

Dinesh Karthik, who has been dropped for the upcoming five-match ODI series against Australia, failed to click with the bat as he scored just a single and lasted for only three balls before being bowled out by Coulter-Nile. With this, Karthik chances of making it to India's World Cup squad also look likely.

Though Krunal Pandya failed to make an impact with bat departing for just one run, the left-arm spinner produced a decent display with the ball as he bowled with a superb economy rate of 4.25. The 27-year-old returned with impressive figures of one for 17 in his four overs.

Umesh Yadav proved to be one of the most expensive bowlers for India during that match as he conceded 35 runs off his four overs without taking a single wicket, including 14 runs in the final over of the match. The experienced bowler gave away most of the runs in the most crucial situation as Australia crossed the line in the last ball to clinch a three-wicket win.

Yuzvendra Chahal too failed to give his absolute best, conceding 28 runs in four overs he bowled during the match. He, however, managed to add one wicket to his account when he bagged a big wicket for India in the form of Glenn Maxwell (56) in the 14th over. Chahal will surely look to come up with much better performances in the upcoming matches in order to strengthen his case forthe World Cup.

Mayank Markande, who was handed his maiden national cap during the opening T20I against Australia, failed to make his international debut a big one as he ended the match without a wicket. Though he was smashed for two boundaries and a six during his four overs, he bowled at a decent economy rate of 7.75.

Jasprit Bumrah continued his rich vein of form in the Visakhapatnam T20I, finishing with the brilliant figures of three for 16. He first dismissed first drop Aaron Finch for a duck before removing Peter Handscomb (13) and Nathan Coulter-Nile (four) in successive deliveries in the penultimate over to bring India back into the game.

The Indian players will look to improve on their performances when they head into the series-deciding second and final T20I on Wednesday at M. Chinnaswamy Stadium in Bengaluru.