The all-rounder Hardik Pandya has posted pictures on social media as he travels with his wife Natasa Stankovic, son Agatya, brother Krunal and sister-in-law Pankhuri Sharma in a private chartered flight to an undisclosed location for a small vacation. 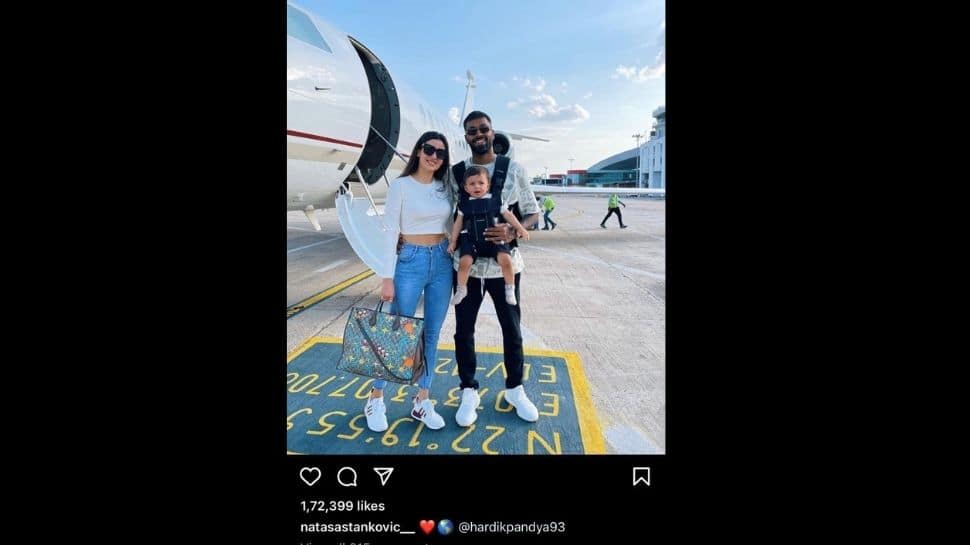 Hardik Pandya with son Agastya and partner Natasa Stankovic outside their private jet on a vacation. (Source: Instagram)
Share:
Written By:

Team India and Mumbai Indians all-rounder Hardik Pandya has decided to take a small break before heading off to Sri Lanka for the limited-overs series. Hardik was named in the squad along with brother Krunal in a team which will be led by Shikhar Dhawan.

The all-rounder has posted pictures on social media as he travels with his wife Natasa Stankovic, son Agatya, brother Krunal and sister-in-law Pankhuri Sharma in a private chartered flight to an undisclosed location for a small vacation. Hardik was last seen in action with Krunal during the 14th edition of the Indian Premier League (IPL) 2021, which was suspended in the month of May due to rising COVID-19 cases in India.

Hardik posted a photo on social media where he is seen aboard an airplane and captioned it as ‘Chilling in the clouds’. Hardik had also posted on social media platforms on Saturday, where he was seen with partner Natasa Stankovic, and brother and India teammate Krunal Pandya among others.

Battling with a lower-back issue since the 2019 Asia Cup, Hardik Pandya has not been bowling regularly for a while now.

“I started bowling in the IPL and my focus is on the World Cup,” Pandya told TOI Sportscast. “I want to make sure that I will be able to bowl in all the games at the (T20) World Cup. I am just trying to be smart and make sure that I don’t miss that. On the bowling front, what matters is how fit I am. Even after my surgery, I didn’t drop my pace. I was not able to drop my control. My bowling is related to my fitness. The fitter I get, the better it comes out. As a fast-bowling allrounder, I tend to get injuries. It is bound to happen and I am okay with it.”

Natasa Stankovic is already steaming up social media with her hot pics on Instagram ever since Indian Premier League (IPL) 2021 was suspended. Natasa Stankovic posted a picture with Hardik and Agastya in which all three of them can be seen in a water tub, posing for a picture.

“Water babies,” Natasa captioned the pic along with a blue heart emoji and tagged the India all-rounder.

Neither of the Pandya brothers found a place in the Indian Test team picked for the tour of England where the team will play New Zealand in the World Test Championship final in June followed by a five-Test series against England in August-September. The IPL 2021 is set to resume in September in the UAE, BCCI said after their last Special General Meeting (SGM).  Meanwhile, India will play Sri Lanka in three ODIs on July 13, 16, and 18 and three T20Is on July 21, 23, and 25. All matches will be played at R Premadasa Stadium in Colombo.