New Zealand women recorded victory by a margin of two runs in the third T20I against India, at Auckland by 2 runs, to win the three-match T20I series 3-0. 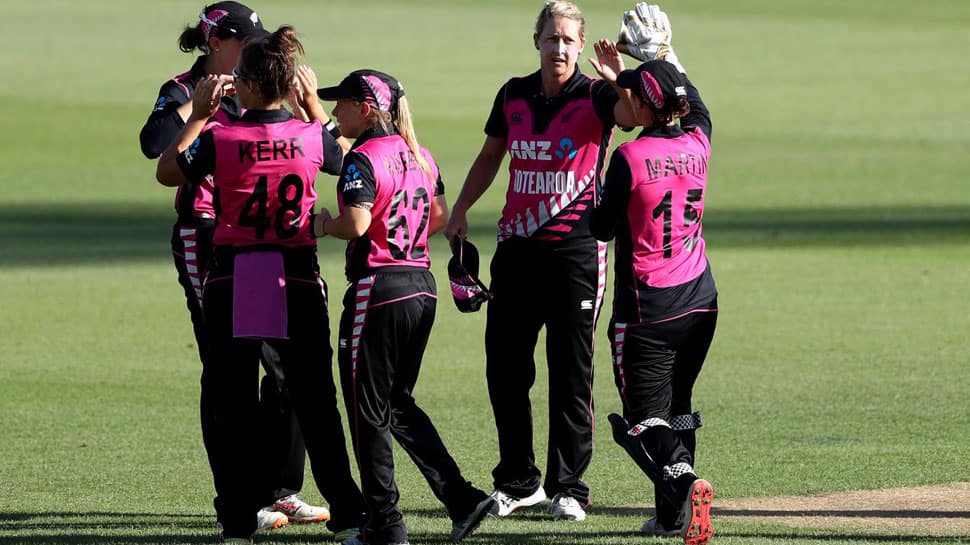 The Indian women's team suffered a two-run defeat at the hands of New Zealand in the third and final T20 International to lose the series 0-3 on Sunday.

# Sophie Devine will bowl the 19th over!

# Amelia Kerr is the next bowler in!

#Wicket! Mandhana departs for 86 off a slower delivery by Sophie Devine, with Lee Tahuhu making no mistakes! India 123/4 (15.3 overs)

# Sophie Devine will bowl the 16th over!

# Leigh Kasperek into the attack!

# Mithali Raj walks down to the crease!

# Wicket! Harmanpreet Kaur has been dismissed, while attempting a sweep, resulting in a leading edge to Anna Peterson! India 102/3 (11.5 overs)

# Amelia Kerr is back into the attack!

#Rosemary Mair is back into the attack!

# Harmanpreet Kaur is the next player in!

# Wicket! Sophie Devine strikes in her first over, dismissing Jemimah Rodrigues who attempted a big hit off a slower delivery. India 76/2 (8.6 overs)

# Half-century for Smriti Mandhana off 33 deliveries!

# Devine into the attack!

# Amelia Kerr is the new bowler in the attack!

# Hayley Jensen comes into the attack!

# Anna Peterson is back into the attack!

# Lea Tahuhu is back into the attack!

# Wicket! Punia departs for 2 as Kasperek makes a fine comeback, with a slow flighted delivery with wicketkeeper Katey Martin making no mistakes with the gloves. India 29/1 (2.4 overs)

# Leigh Kasperek, right-arm off break, comes into the attack!

# 13 runs off the second over bowled by Peterson, as Mandhana hits the first six of the Indian chase! India 20/0 (2 overs)

# Anna Peterson will bowl from the other end!

# 7 runs off the first over, as Mandhana scores the first boundary of the Indian chase! India 7/0 (1 over)

# Lee Tahuhu is set to open the bowling for New Zealand!

# The Indian openers Smriti Mandhana and Priya Punia have made their way down to the crease!

# Wicket! Lee Tahuhu dismissed off the final delivery of the over, as New Zealand post a total of 161/7 in 20 overs!

# Lee Tahuhu is the next player in!

# Wicket! Katey Martin attempts a quick run, but fails to get back in time following an accurate throw by Mansi Joshi, as New Zealand lose their 5th wicket! New Zealand 151/5 (18.5 overs)

# Arundhati Reddy is set to bowl her final over!

# Wicket! Skipper Amy Sattherthwaite has been dismissed for 31 after attempting a big hit off a slow delivery by Yadav, with Rodrigues completing a fine catch. New Zealand 142/4 (17.3 overs)

# Radha Sharma will be bowling the 18th over!

# Katey Martin is the next player in!

# Wicket! Joshi has struck with the vital wicket of Sophie Devine who has been dismissed for 72 off a slower delivery. New Zealand 140/3 (16.4 overs)

# Mansi Joshi back into the attack for her final over!

# Arundhati Reddy who has conceded 14 runs in 2 overs is back into the attack!

# Radha Yadav into the attack!

# Poonam Yadav is back into the attack!

# Arundhati Reddy is back into the attack!

# Mansi Joshi bowls her third over!

# Radha Yadav is back into the attack!

# New Zealand skipper Amy Satterthwaite walks down to the crease!

# Mansi Joshi comes back into the attack, with nine runs off the second over! New Zealand 64/1 (8 overs)

# Just 3 singles off the over as India attempt to make a comeback following a brisk start! New Zealand 55/1 (7 overs)

# Poonam Yadav comes into the attack!

# Hannah Rowe is the new batswoman in!

#Wicket! Suzie Bates has been dismissed for 24 after attempting a big hit off a slow delivery by Arundhati Reddy. Harmanpreet Kaur makes no mistakes, completing a fine catch  New Zealand 46/1 (5.3 overs)

# Arundhati Reddy has been introduced in the attack!

# Sharma continues to bowl with 8 runs off the over, as the openers inch closer to a 50-run partnership. New Zealand 46/0 (5 overs)

# The hosts continue to score at a consistent rate, with 11 runs scored in the fourth over. The run rate has reached 9.50 with New Zealand 38/0 (4 overs)

# Expensive over for India with 13 runs conceded, as New Zealand reach 16/0 at the end of the second over!

# Mansi Joshi has been handed the ball at the other end!

# Both the openers are off the mark with 3 runs off the over as New Zealand reach 3/0 at the end of the first over!

# Sophie Devine will be taking strike with Deepti Sharma set to open the bowling for India!

# The players have walked out to the field with the clash all set to kick off in a few minutes!

# Both the sides are making their way out for the national anthem ceremony!

# Jemimah Rodrigues recorded her personal highest score of 72 in the second T20I!

# New Zealand opener Suzie Bates has recorded the most 50 plus scores in T20Is!

# Mithali Raj has been included in the lineup following an injury to Dayalan Hemalatha in the second T20I!

# New Zealand skipper Amy Satterthwaite has won the toss and opted to bat!

# India Women’s squad for the three-match Paytm ODI series against England women has been announced!

An improved batting performance will be foremost on skipper Harmanpreet Kaur's mind, when India women eyeing a consolation victory, take on New Zealand in the third and final T20 International on Sunday.

In both games whether chasing or batting first, India are stuck in the less than 140-run mark, which is below-par against a top team like New Zealand.

The biggest problem has been the lack of fight from the middle-order save Smriti Mandhana and Jemimah Rodrigues, who were top scorers respectively in the first two games.

Debutant Priya Punia's lack of experience has been evident, but what probably hurt the Women in Blue most is skipper Harmanpreet Kaur's indifferent form.

The Indian captain scored 17 and 5 in the first two games. She has been rusty due to lack of game time since the start of the ODI series where the visitors won quite comfortably.

The White Ferns have improved their game since losing the ODI series with senior batswoman Suzie Bates scoring 57 in the final one dayer and a match-winning 62 in the second T20 International.