After picking up 2/15 in two over against defending champions Mumbai Indians at the MA Chidambaram Stadium in Chennai, Avesh Khan brought out his Delhi Capitals jersey and got it signed by MI skipper Rohit Sharma. 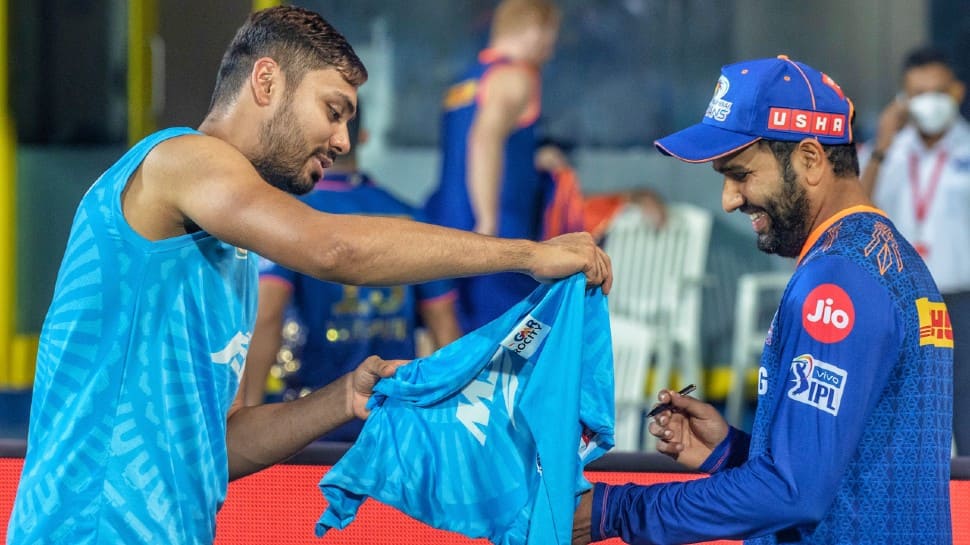 Paceman Avesh Khan has been one of the star performers for Delhi Capitals this season with eight wickets in the first four games of Indian Premier League (IPL) 2021. He is currently the joint second-highest wickettaker this season with Mumbai’s Rahul Chahar and just one scalp behind Royal Challengers Bangalore’s Harshal Patel in the Purple Cap race.

After picking up 2/15 in two over against defending champions Mumbai Indians at the MA Chidambaram Stadium in Chennai, Avesh brought out his Delhi Capitals jersey and got it signed by MI skipper Rohit Sharma.

“The fanboy in Avesh Khan had to come out after the match,” tweeted Delhi Capitals along with two pictures of Rohit signing a jersey for Avesh. Delhi Capitals beat Mumbai Indians for the first time in their last six attempts as Shikhar Dhawan’s 45 and Amit Mishra’s 4 for 34 helped DC register their third win of the tournament.

The fanboy in Avesh Khan had to come out after the match #YehHaiNayiDilli #DCvMI #IPL2021 pic.twitter.com/Qfp32SwUS8

Avesh dismissed MI’s Suryakumar Yadav and Rahul Chahar as MI were restricted to 137 for 9. DC chased the total in 19.1 overs with Steve Smith (33) and Lalit Yadav (22) also contributing with the bat.

Earlier, Rohit Sharma scored 44 off 30 and Suryakumar (24), Ishan Kishan (26) also chipped in but Amit Mishra snapped up 4/24 to leave Mumbai struggling to play out their 20 overs. Jayant Yadav’s 22 gave MI bowlers something to defend and while things got tight in the last four overs, DC eventually held their nerves to get over the line.

With this win, 2020 runners-up DC climbed to the second spot on the points table with six points. They are behind table-toppers Royal Challengers Bangalore, who also have six points but are ahead of DC on net run rate.

MI are placed fourth with four points from as many games.