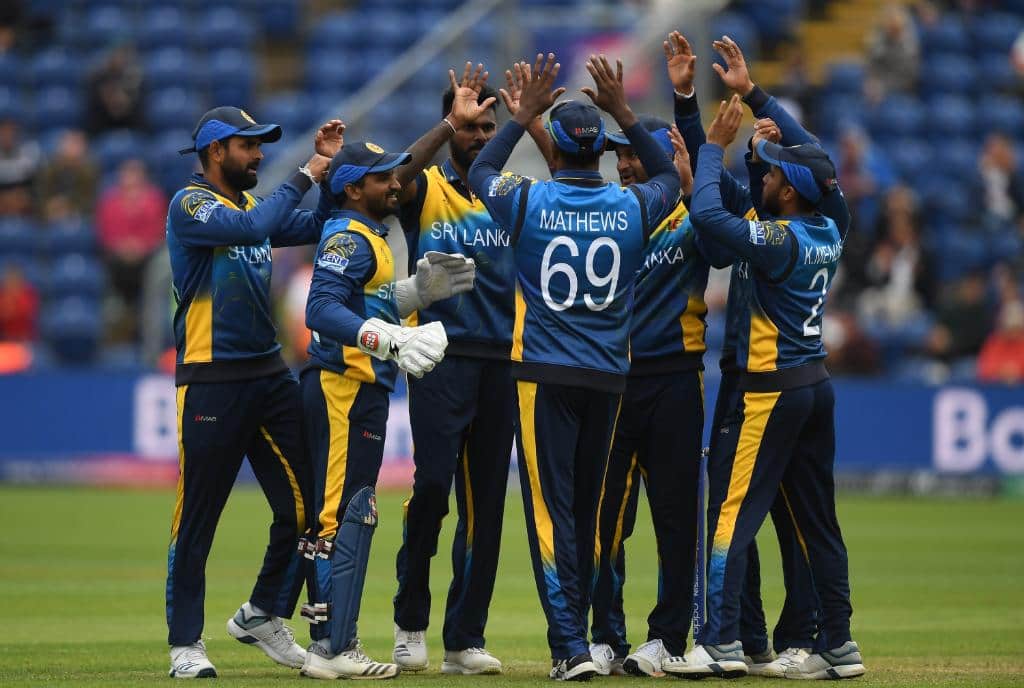 # WICKET! Najibullah Zadran fell just seven runs short of a half-century after being run out by Sri Lankan skipper Dimuth Karunaratne on the last delivery of the 32nd over. Afghanistan 145/9 (32 overs)

# Hamid Hassan is the new batsman in!

# WICKET! Afghanistan are now down to eight wickets. Dawlat Zadran (six) was clean bowled by Malinga on the fourth delivery of the 31st over. Afghanistan 136/8 (31 overs)

# The Sri Lankan bowlers are avoiding giving away easy runs to Afghanistan. Najibullah Zadran (35) and Dawlat Zadran (6) are currently batting at the middle, with Afghanistan now needing 52 runs from 11 overs. Afghanistan 135/7 (30 overs)

# Dawlat Zadran is the new batsman in!

# WICKET! Pradeep strikes again. Afghanistan lose their seventh wicket after Rashid Khan was clean bowled by Pradeep off the first delivery of the 27th over. Afghanistan 123/7 (26.1 overs)

# WICKET!Afghanistan down to six wickets. Gulbadin Naib was caught leg before wicket off the fifth delivery from Pradeep to go back to pavilion for 23 runs. Afghanistan 122/6 (25 overs)

# Gulbadin Naib (13) and Najibullah Zadran (21) have somewhat settled at the middle and reduced their chase to 91 runs from 21 overs remaining. Afghanistan 96/5 (20 overs)

# 11 runs off the last over. Malinga was smashed by Gulbadin Naib for two back-to-back boundaries as Afghanistan now need 94 runs from 22 overs. Afghanistan  93/5 (19 overs)

# Pradeep bowled a good tight over, giving away just three runs to Afghanistan. Gulbadin Naib and Najibullah Zadran are currently batting at their respective scores of one and 17. Afghanistan now need 111 runs from 24 overs. Afghanistan 76/5 (17 overs)

# WICKET! Mohammad Nabi (11) was clean bowled by Perera off the fourth delivery of the 14th over. Afghanistan are now down to five wickets. Afghanistan 60/5 (14 overs)

# Skipper Gulbadin Naib is the new batsman in!

# WICKET! Hashmatullah Shahidi departed for four runs after being caught by Kusal Perera behind the wicket on the fifth delivery of 13th over from Pradeep. Afghanistan 57/4 (13 overs)

# Hashmatullah Shahidi and Mohammad Nabi are currently batting in the middle at their respective scores of three and one. Afghanistan now need 141 runs from 31 overs. Afghanistan 46/3 (10 overs)

# WICKET! Isuru Udana strikes. The Sri Lankan bowled an outside off delivery and Rahmat got an edge to give an easy catch to Mathews at first slip. Afghanistan 43/2 (8 overs)

# A good last over from Malinga as he conceded just four runs, three via ball. Afghanistan now need 146 runs from 34 overs. Afghanistan 41/1 (7 overs)

# Three runs off the last over. Rahmat Shah got off the mark by driving the third delivery of the fifth over between cover and extra cover to grab a single. Afghanistan 37/1 (6 overs)

# Rahmat Shah is the new batsman in!

# WICKET! Malinga gave the much-needed breakthrough to Sri Lanka by removing Mohammad Shahzad. The Afghanistan opener was caught by skipper Dimuth Karunaratne at short midwicket on the fourth delivery of the fifth over. Afghanistan 34/1 (5 overs)

# Seven runs off the last over. Hazratullah Zazai (20) and Mohammad Shahzad (7) have settled at the middle and reduced the chase to 158 runs from 37 overs. Afghanistan 29/0 (4 overs)

# Suranga Lakmal came to bowl the second over and he conceded 11 runs to Afghanistan. The Sri Lankan bowled a shorter second delivery and Zazai spanked it over midwicket to notch up four runs before Mohammad Shahzad punched the fourth delivery between backward point and extra cover for four runs. Afghanistan 17/0 (2 overs)

# Six runs off the first over. Shahzad got off the mark by edging the third delivery to third man for a single, while Zazai flicked the very next delivery wide of long leg to notch up two runs. Afghanistan 6/0 (1 over)

# Mohammad Shahzad and Hazratullah Zazai have walked down the crease to begin Afghanistan's chase. Lasith Malinga to open the attack for Sri Lanka.

# WICKET! Malinga was clean bowled by Zadran on the last delivery of the 36th over. Sri Lanka are now down by nine wickets. Sri Lanka 199/9 (36 overs)

# A good tight over from Rashid Khan, conceding just one run to Sri Lanka. Suranga Lakmal pushed the first delivery of the over to the off side to take a single. Sri Lanka 190/8 (35 overs)

# Seven runs off the 34th over. Malinga smashed the fourth delivery from Dawlat Zadran over mid-off to notch up four runs. Sri Lanka 189/8 (34 overs)

# The play is all set to resume. Match has been reduced to 41-overs per side. Four bowlers to bowl eight overs, one to bowl nine. Innings break will be of 10 minutes. Powerplay 1 can be taken between 1-8 overs, Powerplay 2 between 9 to 33 overs and Powerplay 3 between 34 to 44 overs.

# The rain has stopped and the inspection is set to take place in a few minutes.

# WICKET! Perera was caught behind the wicket by Mohammad Shahzad on the second delivery of the 32nd over from Rashid Khan. Perera's 78-run knock comes to an end. Sri Lanka 180/8 (32.2 overs)

# Suranga Lakmal is the new batsman in!

# Rashid Khan came to bowl the last over and he gave away just two runs to Sri Lanka. Kusal Perera continues to stand strong at 76, while Isuru Udana is currently batting at nine. Sri Lanka 175/6 (29 overs)

# Seven runs off the last over. Isuru Udana got off the mark by guiding the fifth delivery of the 27th over away to third man. Sri Lanka 166/6 (27 overs)

# WICKET! Thisara Perera looked to go for a quick single, but he fell short of his ground to depart for two runs. Sri Lanka are now down by six wickets. Sri Lanka 159/6 (26 overs)

# Thisara Perera is the new batsman in!

# WICKET! David de Silva was caught behind the wicket by Mohammad Shahzad on the last delivery of the 23rd over from Hamid Hassan. Sri Lanka 149/5 (23 overs)

# David de Silva and Kusal Perera are currently batting at the middle.

# WICKET! Nabi seems to be on a roll today as he bagged three of his four wickets in just one over. A similar dismissal for Angelo Mathews, who looked to drive the last delivery but ended up edging it to Rahmat Shah. Sri Lanka 146/4 (22 overs)

# WICKET! Third wicket for Nabi. Kusal Mendis was caught by Rahmat Shah at slip on the fourth delivery of the 22nd over. Sri Lanka 146/3 (21.4 overs)

# WICKET! Nabi strikes again. Thirimanne looked to turn the second delivery of the 22nd over somewhere towards mid-wicket, but ended up dragging it back on to his stumps. Sri Lanka 144/2 (21.2 overs)

# A good tight over from Rashid Khan, giving away just three runs to the Karunaratne-led side. Sri Lanka 139/1 (20 overs)

# Five runs off the last over. Thirimanne (19) and Perera (63) continue to remain steady at the middle and are nearing a half-century stand for the second wicket. Sri Lanka 136/1 (19 overs)

# Skipper Gulbadin Naib bowled a quite expensive last over, conceding 19 runs to Sri Lanka. Perera has brought up a half-century off just 42 balls. He reached the mark by hammering the fourth delivery of the 17th over on the up over cover to notch four runs. Sri Lanka 128/1 (17 overs)

# Perera continues to stand strong at the crease and is approaching his ODI half-century. He is looking for support from Thirimanne (11) after losing his opening partner Karunarantne. Sri Lanka 109/1 (16 overs)

# Nine runs off the last over. Gulbadin Naib bowled a slower short ball and Thirimanne flat bat this past the bowler and umpire Nigel Llong down the ground to notch up four runs. Sri Lanka 104/1 (15 overs)

# Lahiru Thirimanne is the new batsman in!

# WICKET! Mohammad Nabi finally gave the much-needed breakthrough to Afghanistan by removing Karunarantne (30), who was looking in fine touch. The Sri Lankan opener was caught by Najibullah Zadran at long-on on the first delivery of the 13.1 overs. Sri Lanka 92/1 (13.1 overs)

# Kusal Perera and Dimuth Karunaratne are comfortably batting at their respective scores of 39 and 25. The Afghanistan bowlers, meanwhile, are yet to taste success. Sri Lanka 83/0 (11 overs)

# Runs are flowing in at a good pace for Sri Lanka as they have added another five runs in the last over. Karunaratne and Perera are currently batting at their respective scores of 21 and 36, while Afghanistan bowlers are desperately looking for a breakthrough. Sri Lanka 76/0 (9 overs)

# Mohammad Nabi was brought into the attack and he conceded just three runs. While the Sri Lankan batsmen continue to stand strong at the crease, Afghanistan now need to take some quick wickets if they want to avoid their opposition put up a good total. Sri Lanka 62/0 (7 overs)

# Seven runs off the last over. Karunaratne (16) and Perera (26) continue to remain steady at the crease and have brought up a 50-run stand for the opening wicket. Sri Lanka 59/0 (6 overs)

# Mujeeb Ur Rahman comes into the attack!

# Another expensive over from Hassan as he conceded 16 more runs to Sri Lanka. Perera smashed the third delivery of the fourth over towards mid-off for another boundary before Karunaratna also pulled back four runs on the fifth delivery. Sri Lanka 37/0 (4 overs)

# Dawlat Zadran bowled a good last over, giving away just a single to Perera. Karunaratne and Perera are currently batting at their respective scores of six and 13 and looking to build a partnership for the opening wicket. Sri Lanka 21/0 (3 overs)

# Meanwhile, it is only the fourth time in his 32 ODIs that Mujeeb-ur-Rahman has not taken the new ball.

# An expensive over from Hamid Hassan, conceding 15 runs to the Sri Lankan batsman. Perera opened his account by pulling the first delivery of the second over away through square leg to notch up four runs. Sri Lanka 20/0 (2 overs)

# Five runs off the very first over. Karunaratne got off the mark by riding the fifth delivery of the first over for a boundary towards fine leg. Sri Lanka 5/0 (1 over)

# Dimuth Karunaratne and Kusal Perera to open the innings for Sri Lanka. Dawlat Zadran will kickstart the proceedings for Afghanistan.

# Afghanistan are going with an unchanged Playing XI, while Sri Lanka have made one change.  Nuwan Pradeep has been brought in place of Jeevan Mendis.

Having slumped to defeats in their respective opening matches, Sri Lanka and Afghanistan will both look to bounce back when they lock horns in their an ICC World Cup 2019 clash at Sophia Gardens in Cardiff on Tuesday.

Sri Lanka are heading into the match after suffering a crushing 10-wicket defeat at the hands of New Zealand in their opening fixture at the same venue.

Put in to bat first, Sri Lanka failed to counter New Zealand's bowling attack and collapsed to 136 all out--which was their joint fifth-lowest total in the quadrennial event and also the lowest-ever total at Sophia Gardens in ODIs.

Dimuth Karunaratne was the only shining light as he remained unbeaten at 52 to become only the second captain to carry the bat in ODIs after Upul Tharanga in 2017.

Heading into the clash, Sri Lanka need to pull up their socks and come up with an all-round performance to seal their first win of the 2019 ICC World Cup.

Afghanistan, on the other hand, surrendered to a seven-wicket defeat at the hands of defending champions Australia in their opener.

However, the Gulbadin Naib-led side have a great chance to notch up their first win against Sri Lanka, who have struggled with the form off-late.

According to ICC, outbreaks of rain is expected during the match which can have a major impact on the match and even lead to a shortened game at Cardiff. The rainfall is likely to be of the heavy kind, throughout the morning and afternoon. Seamers are expected to get ample assistance, with a 90% cloud cover for the most part of the day