Smith was batting at 80 from 152 balls during his side's first innings of the 2nd Ashes Test when was hit on the neck by a bouncer bowled by Test debutant Jofra Archer. 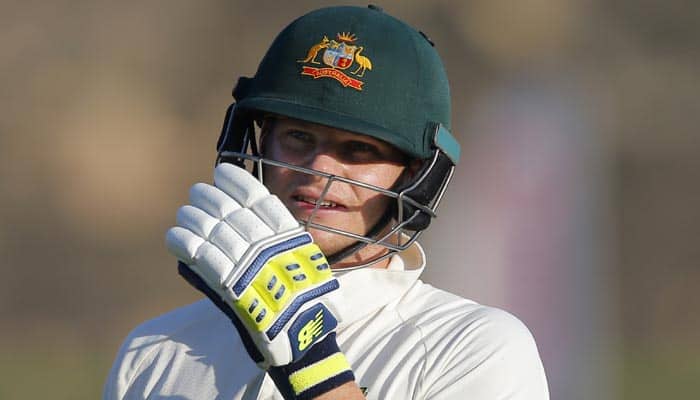 Australian batsman Steve Smith, who was forced to miss the final day of the second Test againt England following a mild concussion, is hoping to regain "100 % fitness" before the third Ashes match-- beginning Thursday at Headingley Carnegie in Leeds.

Smith was batting at 80 from 152 balls during his side's first innings of the match on Day 4 when he got a striking blow on the back of his neck by a bouncer bowled by Test debutant Jofra Archer. He immediately fell down on the ground following a blow before being attended by the physios of the two sides.

Subsequently, he retired hurt and was sent for the concussion test. After some time, Smith made his way back to the field and went on to play a blistering knock of 92 runs.

The former Australian skipper will now require to bat against top pace for next three days and show no signs of dicomfort in order pass the fitness test for the upcoming Test. However, Smith was hopeful of getting fully fit in time for the third Ashes match.

"I'm going to be assessed over the next five or six days, each day a couple times a day, to see how I'm feeling and progressing and I'm hopeful I will be available for that Test match, but it's certainly up to the medical staff and we'll have conversations. It's certainly an area of concern concussion and I want to be 100% fit," ESPNcricinfo quoted the him as saying.

"I've got to be able to train probably a couple of days out and face fast bowling to make sure my reaction time and all that kind of stuff is in place. There's a few tests I'll have to tick off and I guess time will tell," Smith added.

On Sunday, Smith was ruled out of the final day of the second Test after another concussion test was conducted before the day's play as per Cricket Australia protocol and which "demonstrated some deterioration from his testing which is consistent with the emergence of the symptoms he was reporting."

The second Test between Australia and England eventually ended in a draw. The Tim Paine-led side is leading the five-match series after registering a massive 251-run win in the opening match in Birmingham, where Smith notched up two centuries and became only the fifth Australian batsman to score tons in both innings of an Ashes Test.