A win for Australia will take them to 12 points and confirm their place in the World Cup semi-finals. 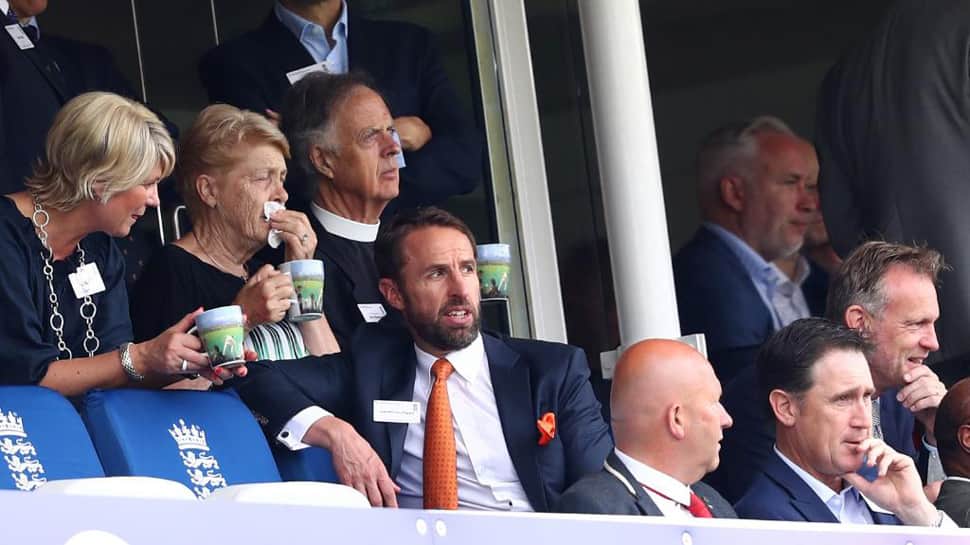 LONDON: Lord’s is not entirely packed for game 32 of the ICC Cricket World Cup 2019 between hosts England and Australia, but the big crowd packed into the stands makes for a fun atmosphere.

This is a marquee match: England vs Australia at Lord’s. A win for Australia will take them to 12 points and confirm their place in the World Cup semi-finals. Top-ranked England, having lost to Sri Lanka last week, must win two of their remaining three games. Each one is against teams ranked higher than them on the World Cup points table: after England, India and New Zealand await.

The celebrity quotient is high at Lord’s today. Ed Sheeran, Damien Lewis, Stephen Fry, Gareth Southgate, Glenn Hoddle are here. The TVs keep panning to them, which excites the crowd.

Today is 36 years to the day that Kapil Dev’s Indian cricket team won the Prudential World Cup at Lord’s in 1983. Sunil Gavaskar is on commentary during the England-Australia match, and when not on air he makes it a point to come and mingle with reporters in the press dining area.

As Gavaskar is seated at a small table regaling some of us traveling Indian reporters with stories of yore, the television above us shows clips of the 1987 World Cup which Allan Border‘s unfancied Australian team won at Eden Gardens by beating England. Moments later, Border walks out of the Lord’s media box and towards one of the lifts.

Gavaskar gets his attention and the two embrace in a proper bear hug. Two World Cup winners, two icons of cricket, who once held the record for most Test runs.

A few moments afterwards, one of the lifts on the first floor and out steps Sachin Tendulkar. Many eyes turn to see Tendulkar greet Gavaskar. It is a scene for many people’s photo albums. The two geniuses of Indian cricket, batting legends both – the original ‘Little Master’ and the world famous ‘Little Master’ – standing and conversing in Marathi.

Later, the last over of Australia’s innings is about to start, the security cordon under the Lord’s media centre makes way. A commotion ensues as a large group of the World Cup’s Flag Team turns to see Tendulkar, dapper in a well-fitted black suite and designer sunglasses, starts to walks toward the boundary line. Immediately, mobile phones are taken out and over a dozen Flag Team members clamber for selfies.

Tendulkar obliges most of them, patiently, but as the over progresses he tells some of them that he has to go onto the field and complete his media duties, but will be back. Most of them reluctantly fall back, but one Indian-origin fan pleads for a selfie. Smiling, Tendulkar obliges him. That fan’s life is made.

Michael Slater, standing a few behind watching these scenes unfold, is called out to by spectator walking up the steps in the lower tier of the Compton Stand in a 1999 Australian World Cup jersey, a cup of beer in his hands.

The man shrugs and continues on his way.

After his TV stint on the Lord’s outfield, Tendulkar walks back towards the media centre. This time, many more fans know he is here. A crowd gathers. Security personnel try to make a path between them, but it is very tough. Mobile phones click away, miniature cricket bats, caps and cutouts of four and sixes are thrust in Tendulkar’s face. He cannot sign any, he apologises, and tries to push through the crowd. It takes a few moments for the security cordon to assist Tendulkar through the gaggle of fans and into one of the Lord’s media centre lifts.

Disappointed, the fans turn around to see a celebrity impressionist of Gareth Southgate named Neil, who was interviewed during the innings break. The same bats and caps and placards are given to Neil, who readily signs them as photographs are clicked.

I wonder how many have made out that it not really Gareth Southgate.