The ABVP bagged top three posts in DUSU polls, while a NSUI candidate was elected secretary. 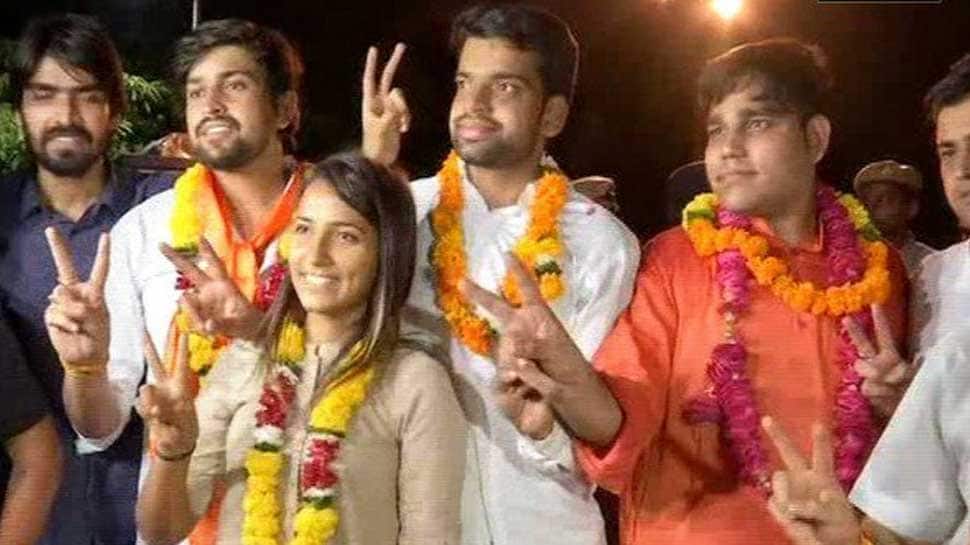 The Akhil Bharatiya Vidyarthi Parishad (ABVP) won three posts including that of President, whereas National Students' Union of India (NSUI) managed to get one post in the Delhi University Student Union (DUSU) 2018 elections

According to the figures shared by the chief electoral officer, Ankiv Basoya (ABVP) got 20,467 votes against Sunny Chillar (NSUI) who got 18,723. Basoya won the presidential poll by 1,744 votes.

Similarly, for the post of secretary, Aakash Choudhary (NSUI) got 20,198 votes against his ABVP rival Sudhir who got 14,109 votes. The NSUI candidate was declared a winner by 6,089 votes.

The counting for DUSU polls was suspended midway on Thursday due to "faulty EVMs and the students' uproar over it".

Following objections by students, the election officials decided to suspend the counting, but it was resumed later.

The office of the Chief Electoral Officer in Delhi later clarified that the EVMs used in Delhi University Students Union (DUSU) election have not been issued by the Election Commission and it seems to have been procured privately.

"With reference to captions being shown in some news channels regarding the use of EVMs in the elections of DUSU, I am directed to inform that the EVMs in question are not of Election Commission as no such EVMs have been allotted/issued to DU by this office,'' the Chief Electoral Officer said.

"It was also confirmed from the state election commission that no such machines have been given by them too," a statement issued by the office of the Chief Electoral Officer in Delhi said.

"It seems that the DU has procured these machines privately. A detailed report in this regard will be sent subsequently as all the officials of DU are not available and busy in their election process at present," it said.

Earlier in the day, an election official for DUSU polls had said that after elaborate discussions it was decided that the counting will be resumed on Thursday as all candidates have reached an agreement on this.

DUSU polls: Only 8 candidates fighting, how were votes cast for 10th? NSUI asks