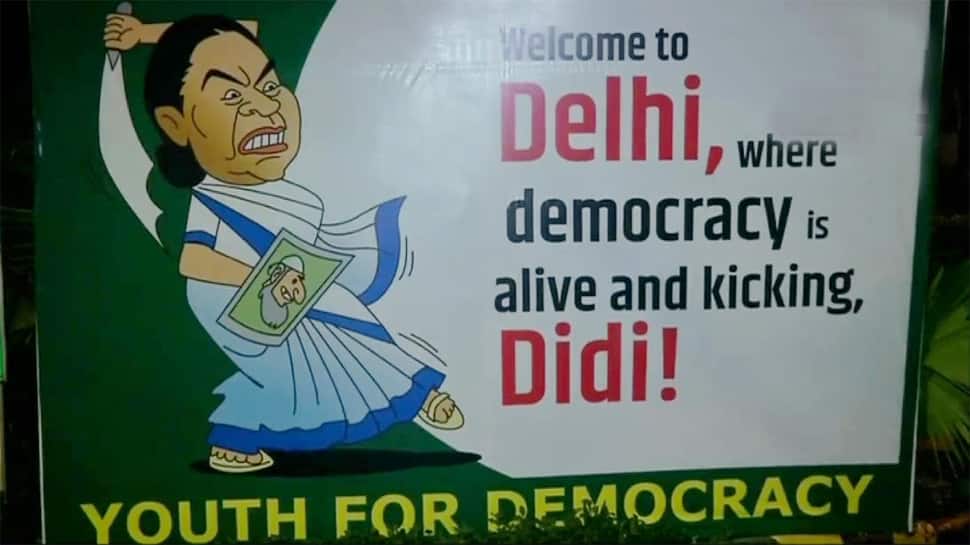 NEW DELHI: With West Bengal Chief Minister Mamata Banerjee in Delhi to attend a mega opposition rally, posters have been put up in the national capital mocking the Trinamool Congress chief. Posters carrying captions which read 'Didi, smile please, you are in a democracy' and 'Welcome to Delhi, where democracy is alive and kicking' have been put up by an organisation known as Youth For Democracy.

The posters put up at several places across the city have caricatures of the West Bengal Chief Minister along with different captions aimed at taking a dig at her over various developments in her state recently.

They have been installed at major areas of Jantar Mantar road, Bang Bhawan (Hally Road) and Windsor Palace Circle Area.

Mamata Banerjee has emerged as one of the most formidable voices of the opposition and her visit to Delhi assumes significance after the protest she led in Kolkata over CBI's attempt to interrogate the city police chief in chit fund scam cases created a political storm.

She has been at loggerheads with the ruling BJP, which is eyeing to garner at least 22 of 42 seats from Bengal in the upcoming Lok Sabha elections.

Mamata had in January organised a rally of opposition parties in Kolkata, in which she had appealed all leaders to unite with the aim of ousting the Narendra Modi government at the Centre.

Massive fire breaks out at slum in Delhi's Paschim Puri, over 200 huts gutted