Now You See Me 2 movie review: Not captivating enough 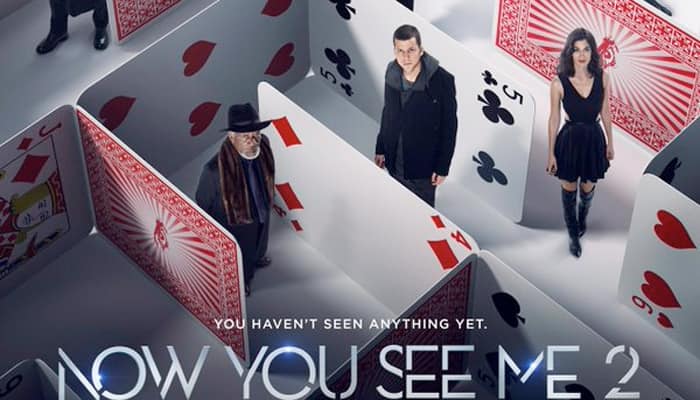 Second innings are never the same.

There was something appealing about the first edition of "Now You See Me". The narrative was raw, thrilling and engaging. But this edition is a far cry from the first. It takes the characters for granted, breaks the mould it has created in the first and fails to engage you with the same propensity.

This film takes off from where it left in the first edition. Following the orders of an ancient magician's alliance called "The Eye," the four horsemen often involve exposing corrupt businessmen or giving cheated people their money back, which turns them into global heroes and gets them in trouble with the FBI, naturally. These four are now corporate whistle blowers rather than the modern day Robinhoods as they were earlier projected.

After a spectacular escape in the previous film the four are in hiding, successfully outwitting the FBI. But after a year, Merritt McKinney (Woody Harrelson), J. Daniel Atlas (Jesse Eisenberg) and Jack Wilder (Dave Franco) are now joined by Lulu (Lizzy Caplan), the "girl Horseman". Their FBI mole and ringleader Dylan Rhodes (Mark Ruffalo) is busy throwing his chief (Sanaa Lathan) off their trail, and hoax buster Thaddeus Bradley (Morgan Freeman) is in jail.

With card tricks, jugglery and hypnotism, the illusionists are out to make their comeback performance, in the hope of exposing the unethical practice of a tech mogul Walter Tressler (Daniel Radcliffe) who too is a magician of sorts and the illegitimate son of an insurance magnate Arthur Tressler (Michael Sheen).

They promise to pull off an impossible feat in the middle of the river Thames in London. But, unwittingly they get teleported to Macau in Hong Kong where they take the help of a young man of Oriental origin, Li (Jay Chou) and his grandmother Bu Bu (Tsai Chin).

The script written by Ed Solomon lacks clarity. With heavy duty magic-action scenes, verbose exposition and too many characters with their own history, the plot gets convoluted. Demystifying its own mysteries strains the limits of patience and belief and further makes the narrative unconvincing.

As for the performances, Jesse Eisenberg and Lizzy Caplan are charming. Mark Ruffalo is earnest and Daniel Radcliffe along with Morgan Freeman seem to be disinterestedly sleepwalking in their respective roles. Michael Caine's rendition of Arthur Tressler is staid and Woody Harrelson in a double role is dismissible. But honestly with the focus shifting rapidly, nothing registers.

Jay Choy and Tsai Chin are somewhat impressive as their characters show promise, but are short lived with the thinly written characters.

Technically, the film is brilliant. The production design by Sharon Seymour merges the uneasy mix of the locales. With minimum computer generated images, New York, Macau and London are well depicted.

But overall, this film does not succeed to wow.