Colombia were guaranteed a place in the last eight as Group B winners and made 10 changes from the side that beat Qatar in their last outing but still dominated play against Paraguay. 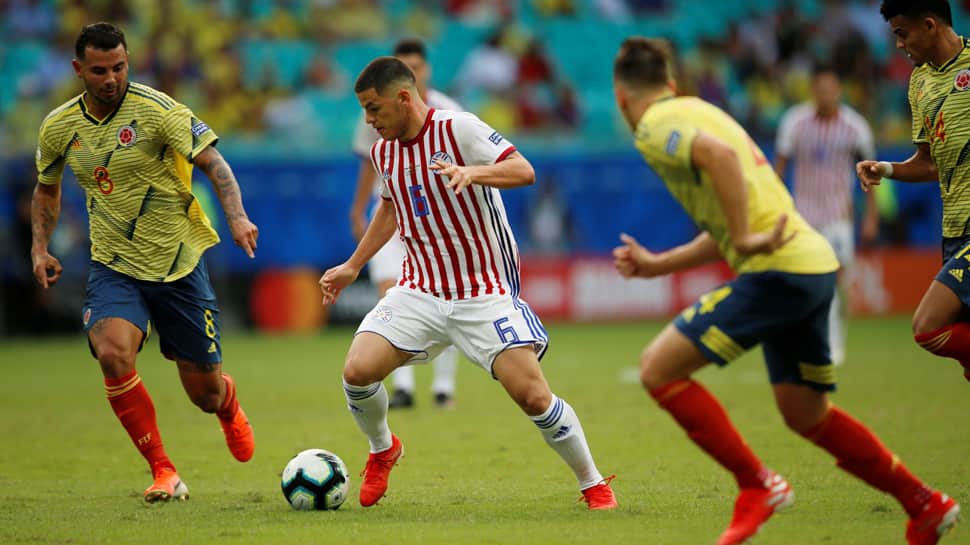 Colombia enjoyed a 1-0 win over Paraguay despite fielding a second-string side to make it a clean sweep of victories in their Copa America group stage campaign, leaving Paraguay`s hopes of staying in the tournament hanging by a thread.

Colombia were guaranteed a place in the last eight as Group B winners and made 10 changes from the side that beat Qatar in their last outing but still dominated play while Paraguay, who had to win to ensure they progressed, barely caused any danger.

Midfielder Gustavo Cuellar put Colombia ahead just after the half-hour mark, sliding the ball through the legs of Paraguay goalkeeper Roberto Fernandez, while Luis Diaz struck in the second half but the goal was ruled out by VAR.

The technology was used again in stoppage time to over-rule a penalty that had been awarded to Colombia, and coach Carlos Queiroz hit out at the way VAR has been implemented at the Copa America and the long delays it has caused.

"It`s hard to think of things to say about VAR. Technology is vital to give credibility to football, we can all agree on that, but we disagree with the way it`s being used," he told a news conference.

"Something has to change, because the fans are left confused and the players and coaches too. VAR was supposed to make football clearer and more objective but it`s doing the opposite.

"We need to have a re-think for the good of football because the fans are not happy about it and neither are we."

Queiroz`s side finished top of the group with nine points, while Argentina came second with four and also progressed to the quarter-finals after beating Qatar 2-0.

Paraguay are third on two, with Qatar last with one.

Paraguay, who reached the Copa America final in 2011 and semi-finals in 2015, must now hope Monday`s game between Japan and Ecuador is drawn as victory for either side would send them out of the tournament.

Paraguay have long had a reputation as hard-nosed, physical opponents but coach Eduardo Berizzo has tried to change their style of play in favour of keeping possession and his side have largely struggled to adapt.

"Today our passing in midfield was sloppy and we couldn`t attack with fluidity," Berizzo said, clinging on to the hope that his side could still sneak through to the last eight.

"I wish the game between Ecuador and Japan goes our way and then we will try and play completely different from the quarter-finals onwards."