The Indian Colts, also known as the Blue Cubs, have played the AFC U-16 Championships seven times - with their best show coming in the 2002 edition where they were defeated by the Republic of Korea in the quarterfinal. 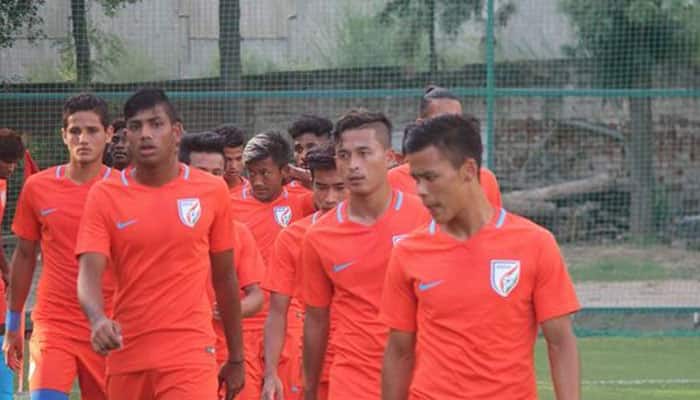 New Delhi: Indian football is ready to register a historic first with its maiden appearance at a FIFA World Cup as 24 nations chase the 2017 U-17 FIFA trophy when the tournament kicks off on October 6.

The Indian Colts, also known as the Blue Cubs, have played the AFC U-16 Championships seven times - with their best show coming in the 2002 edition where they were defeated by the Republic of Korea in the quarterfinal.

The best day for India's under-16 football team arrived at the 2013 South Asian Football Federation (SAFF) Championships when they lifted the trophy in Nepal.

The colts couldn't have asked for better preparation getting exposure by playing around the globe in the run-up to the U-17 World Cup. The All India Football Federation (AIFF) has spent crores since 2015, though its plans hit a roadblock when former coach Nicolai Adams couldn't produce the desired results consistently.

The team had travelled to Germany, Spain, Dubai, South Africa and Brazil by the end of 2016, using that experience at the three tournaments in Goa - the AFC U-16 Championships, AIFF Youth Cup and the U-17 BRICS tourney.

But the wooden-spoon finish at the 16-team Granatkin Memorial Cup in St Petersburg led to Adam's ouster and the appointment of Luis Norton de Matos as the team's chief coach.

Matos took charge of the team in February 2017 and has been credited with developing young stars, including latest on board at Manchester United, Victor Lindelof.

The 63-year-old Portuguese has the experience of coaching SL Benfica 'B', Vitoria de Setubal and the Guinea-Bissau national team, having played as forward for the Benfica academy and made five appearances for the national team in 1982.

He is also the former Director of Football, Sporting Clube de Portugal.

The Indian squad is led by the midfielder from Manipur, Amarjit Singh Kiyam, and have now settled in Delhi ahead of their Group A opener against the USA on Friday.

After a gruelling schedule overseas, the team has been at home for the last two months, honing its skills in a few practice matches in Bengaluru. The competitive preparations ended on a winning note on September 21 when Matos' boys defeated Mauritius under-17 team in Goa.

While the coach will want all of his boys to step up on the big stage, the following five may turn out to be the standout performers.

Amarjit Singh: A product of the Chandigarh Football Academy, Manipur lad Amarjit is a natural leader with a sound head on his shoulders. He guides his mates from the midfield.

Sanjeev Stalin: The defender from Bengaluru is regarded as a set-piece, dead-ball specialist and a live wire on the field.

Aniket Jadhav: Widely touted as India's next big striker, Jadhav played for India in the FC Bayern Munich Youth Cup in 2014. Since then, he has climbed up the ranks at national level to find a place in the U-17 World Cup squad.

Anwar Ali: Part of the Minerva Academy, Ali played for his club side that beat the national team 1-0. He was initially spotted by former coach Adams but couldn't make it to the squad, only to be included as late as April 2017.

Komal Thatal: The playmaker from Sikkim made headlines with his goals against Brazil and Uruguay; and he could be Matos's man to supply those incisive passes while doubling up as an attacking forward now and then.

Infrastructure will be U-17 World Cup's biggest legacy: Javier Ceppi