A group of 10 Congress legislators, led by Leader of Opposition in the Goa Assembly Chandrakant Kavlekar, merged with the ruling BJP. 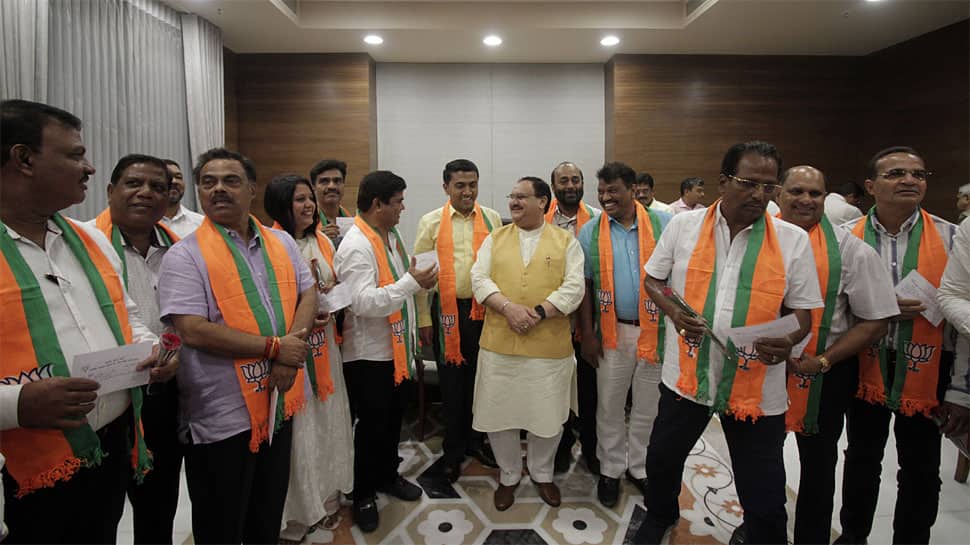 PANJIM: The Goa cabinet expansion is likely to take place on Saturday (July 13), sources told Zee Media. A group of 10 Congress legislators, led by Leader of Opposition in the Goa Assembly Chandrakant Kavlekar, merged with the ruling BJP, increasing the saffron party's strength to 27 in the 40-seat house.

State Chief Minister Dr Pramod Sawant is in Delhi Friday to attend an important meeting and will reach Goa by Saturday morning. Therefore the oath-taking ceremony will take place on Saturday, sources added.

In a major blow to Congress, 10 out of its 15 MLAs in Goa merged with the BJP, reducing the party's strength in the state Assembly to mere five members. These MLAs include -- Kavlekar, Isidore Fernandes, Francis Silveira, Filipe Neri Rodrigues, Jennifer, Atanasio Monserrate, Antonio Fernandes, Nilakanth Halarnkar, Clafacio Dias and Wilfred D`Sa.

The 10 legislators met BJP working president JP Nadda in Delhi on Thursday and are likely to meet president Amit Shah on Friday.

A similar situation also arose in Karnataka after 10 MLAs of the ruling Congress and JD(S) coalition shifting allegiance to BJP.

Alleging horsetrading, the Congress party protested against the BJP-led government over political developments in Karnataka and Goa and staged a walkout in both the houses of Parliament. The protests were led by UPA Chairperson Sonia Gandhi and Congress leader Rahul Gandhi.

Congress Goa in-charge A Chellakumar alleged that the BJP had offered money and ministerial birth to the Congress MLAs who left the party. "Some of the MLAs who have left called me and told that BJP has approached them, so and so person came to their house, gave this much offer and ministerial berth. The BJP has started poaching of MLAs right after forming the government," Chellakumar told ANI.