"CMD Air India Shri Ashwani Lohani flagging off AI 173 the first commercial flight from Delhi to San- Francisco charting the North Polar route. Congratulations to our Pilots and Cabin Crew for being part of this landmark initiative," said Air India. 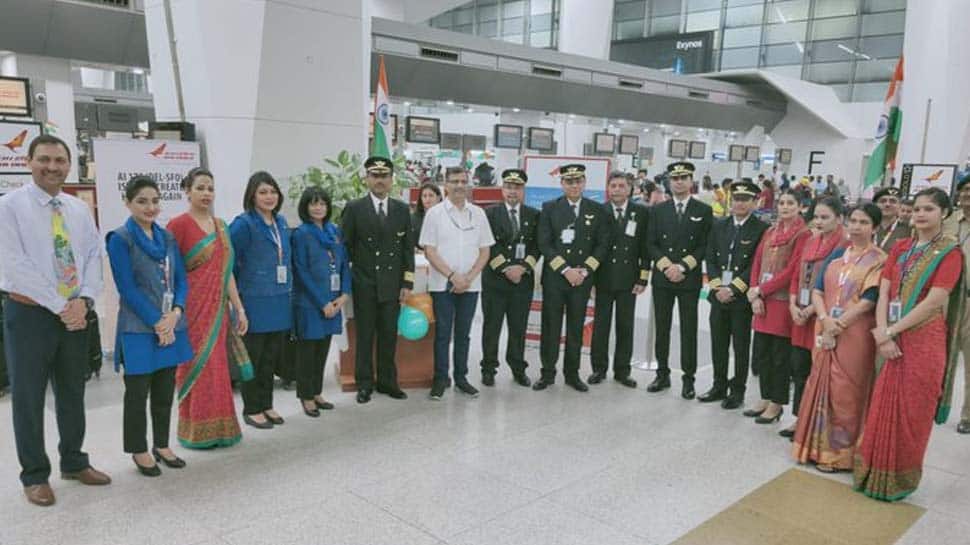 In a landmark accomplishment in the aviation industry, Air India has launched the first-ever commercial flight by an Indian carrier to fly from Delhi to San- Francisco charting the North Polar route. The passenger flight AI 173 undertook the journey on August 15 and was flagged by Air India Chairman and Managing Director Ashwani Lohani.

"Today Air India is set to add a new chapter to the annals of Indian Aviation with its epoch-making commercial flight AI 173 taking off from Delhi to SFO over the North Pole route. We congratulate our esteemed Passengers who are part of this Historical voyage. CMD Air India Shri Ashwani Lohani flagging off AI 173 the first commercial flight from Delhi to San- Francisco charting the North Polar route. Congratulations to our Pilots and Cabin Crew for being part of this landmark initiative," said AI.

#FlyAI : CMD Air India Shri Ashwani Lohani flagging off AI 173 the first commercial flight from Delhi to San- Francisco charting the North Polar route. Congratulations to our Pilots and Cabin Crew for being part of this landmark initiative. pic.twitter.com/FNZe3pkNrx

Actor Vivek Oberoi, who was also a passenger in the flight, posted a video on social media. Taking pride in this feat of India, he showed clips while flying over the north pole.

According to news agency IANS, the flight was operated by Captain Ranjeesh Sharma and Captain Digvijay Singh. Air India Western Region Director Mukesh Bhatia said, "Passengers will benefit from the reduced fuel consumption and a better environment from the reduced carbon emissions. Situated on opposite sides of the Northern Hemisphere, India and North America would benefit immensely by using existing North Polar routes for commercial air operations," Bhatia had said.

Air India had conquered this frontier in 2007 when Captain Amitabh Singh -- currently, Director (Operations) -- flew a Boeing 777 over the polar region. He had taken delivery of the brand new aircraft and flew it over the North Pole from Seattle to New Delhi, going in the record books as the first Indian pilot to notch this feat.

The AI already has flights to the US from the Atlantic and Pacific routes as part of its endeavour to conserve fuel, slash travel time, improve aircraft utility and reduce carbon emissions. According to AI, the fuel-saving on the Polar route is expected to be in the region of two-seven tonnes with a resultant decrease in carbon emission of 6 to 21 tonnes per flight and is part of the initiative of the Fuel Conservation Committee of the airline.

The North Pole region has given airlines an opportunity to reach destinations previously not available for non-stop services and reduce flying times on existing routes and city pairs, he pointed out. Increasing use of these route has resulted in major improvements in areas of aviation infrastructure like communications, air traffic control, and services supplies at remote airports. However, most of the Polar region still falls short of the infrastructure and the logistics standards of the more widely used air-spaces, thereby offering unique opportunities laced with distinct challenges, Bhati explained.

In case of diversion of a flight on the Polar region, the AI has hired a Diversion Support Agency to assist in the aircraft and passenger retrieval.

In this context, the Directorate General of Civil Aviation (DGCA)`s Operations Circular 02.2019 on `Polar Operations` clearly defines the requirements for airlines to operate in the Polar region with sufficient documentation and clear guidelines.

The AI has secured approvals from the DGCA and FAA, crew training, weather monitoring, alternate selection and aircraft serviceability are enhanced to ensure safety in operations.

Interestingly, Polar flights have been in operation since 1937, when a Soviet pilot Valery Chkalov became the first to fly a single-engine aircraft from Moscow to Vancouver (Washington State) in the US over the North Pole covering the 8,811 km distance in 63 hours.