The Supreme Court on Saturday, (November 9, 2019) dismissed the Special Leave Petition (SLP) filed by Shia Waqf Board challenging the order of 1946 Faizabad Court in connection with the Ram Janmabhoomi-Babari Masjid title dispute case.

"We have dismissed the Special Leave Petition filed by Shia Waqf Board challenging the order of 1946 Faizabad Court," Chief Justice of India Ranjan Gogoi said while reading out the judgement.

While reading out the verdict in the Ayodhya land dispute case, the Chief Justice said, "Babri mosque was built by Mir Baqi. It is inappropriate for the Court to get into the area of theology.'' 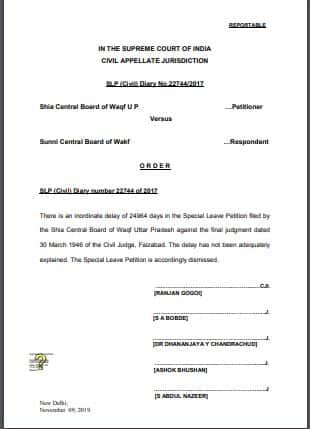 The five-judge Constitution bench of the Supreme Court ruled in favour of the Hindus in the over 70-year-old Ram Janmabhoomi-Babari Masjid title dispute case ordering the allocation of the contested site to them for the construction of a temple.

The historic day for India - the largest secular democracy in the world - saw the end of a dispute spanning several centuries which had pitted the Hindu and Muslim communities against each other in the courts.

But the court also ordered that 5 acres of alternate land should be provided to the Sunni Waqf Board in a prominent place in Ayodhya. According to the Supreme Court judgement, the Centre must establish a Board of Trustees within three months for the construction of the Ram Mandir.

While reading out its unanimous judgement in the politically-sensitive case, the bench said that Ram Janmabhoomi is not a 'legal personality' but the deity is a jurisdictional person.

"Evidence in the records show that Hindus were in the possession of the outer court of the disputed land," Chief Justice Gogoi said.

He further said that credentials provided by the Archaeological Survey of India are beyond doubt and its findings can`t be neglected.

The judgement by the five-judge bench of the Supreme Court on the Ayodhya title suit is "unanimous", Chief Justice of India Ranjan Gogoi said on Saturday while unsealing the verdict in a packed courtroom.

CJI also requested silence in the court, as the judgement was signed. He said there was a need to preserve the sense of balance for the belief of people.