Congress general secretary organisation K C Venugopal issued a statement saying that the AICC has approved the decision to bring in massive changes in Uttar Pradesh unit of the party.

In an apparent effort to revive its cadre in Uttar Pradesh, the Congress on Monday dissolved all its district committees in the state. The move came exactly a month after the Congress' dismal performance in the recently held Lok Sabha elections in the state. A three-member panel has been set up by the party to look into complaints of gross indiscipline during the election. Congress general secretary organisation K C Venugopal issued a statement saying that the All India Congress Committee (AICC) has approved the decision to bring in massive changes in Uttar Pradesh unit of the party. The statement added that the AICC has approved the proposals submitted by its general secretary in-charge UP East Priyanka Gandhi Vadra and general secretary in-charge UP West Jyotiraditya Scindia.

With Assembly bypolls for 12 seats in Uttar Pradesh approaching, Congress is trying to regain its lost ground and the party has constituted a two-member team to oversee election preparations in all the Assembly seats which are going to witness bypolls. Ajay Kumar Lallu, the leader of the Congress Legislative Party, has been given the responsibility to make organisational changes in Uttar Pradesh East, said the statement, while Scindia has been tasked with finalising the name of the person who will be in charge of making organisational changes in Western Uttar Pradesh. 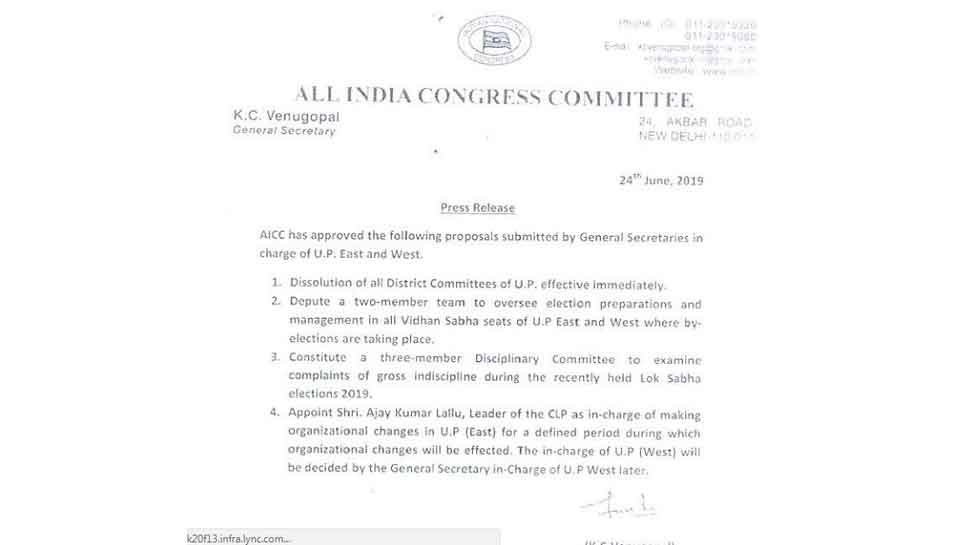 The decision to dissolve the district committees in Uttar Pradesh comes days after Priyanka Gandhi and Scindia held review meetings following the party's disastrous performance in Lok Sabha election. It may be recalled that Priyanka and Scindia were appointed as the party general secretaries by Congress president Rahul Gandhi few weeks before Lok Sabha election.

Both Priyanka and Scindia had campaigned vigorously during the election but the Congress could manage to win only one (Rae Bareli) out of 80 Lok Sabha seats in Uttar Pradesh. Even Congress president Rahul Gandhi faced defeat from the Gandhi bastion of Amethi against Union minister Smriti Irani by a margin of 55,000 votes.