Decommissioned aircraft carrier INS 'Viraat' on final voyage to Gujarat, to be dismantled and sold as scrap

The de-commissioned aircraft carrier INS Viraat, which was in service for 30 years, moves out of the Naval Dockyard in Mumbai on Saturday (September 19, 2020) for a ship-breaking yard in Gujarat. 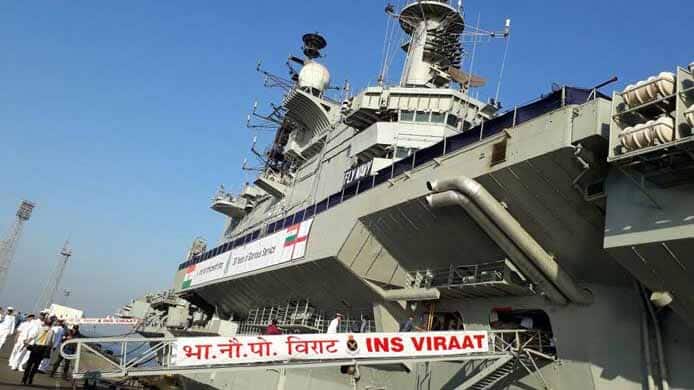 Mumbai: The de-commissioned aircraft carrier INS Viraat, which was in service for 30 years, moves out of the Naval Dockyard in Mumbai on Saturday (September 19, 2020) for a ship-breaking yard in Gujarat.

INS Viraat, the second Centaur-Class aircraft carrier-in-service has spent 30 years in the Indian Navy and 27 years in the Royal Navy. It was decommissioned in August 2017.

INS Viraat holds the world record, as mentioned in the Guinness Book of records, for being the longest-serving warship of the world.

The Indian Navy on microblogging site Twitter paid an emotional tribute to the ship with a minute video.

#Viraat Callsign "Romeo Two Two" - End of an era, a glorious chapter in the history of @indiannavy. She departs #Mumbai today for her final journey.

The ship has clocked more than 22,622 flying hours by various aircraft in the past three decades and has spent nearly 2,252 days at sea sailing across 5,88,287 nautical miles (10,94,215 KM). This implies that Viraat has spent seven years at sea, circumnavigating the globe 27 times.

Viraat played a major role in Operation Jupiter in 1989, during the Sri Lankan Peacekeeping operation, after which she was affiliated with the Garhwal Rifles and Scouts of the Indian Army in 1990.

The ship has participated in various international joint exercises like Exercise Malabar (USA), exercise Varuna (French), Naseem-Al-Bahar (Oman Navy). She has also been an integral element of all annual theatre level exercises (TROPEX).

The last operational deployment of Viraat was for the International Fleet Review (IFR 2016) off Vishakhapatnam in February 2016. `Mother`, as she was fondly referred to in the Navy, had been commanded by 22 Captains since 1987.

The legacy of Viraat will be carried forward by INS Vikramaditya, which is already integrated with the fleet, and INS Vikrant which will be inducted in the next few years.