"Devendra Fadnavis will become the chief minister of Maharashtra but you'll have to wait for some time for the final decision. Maharashtra will have the government of BJP and Shiv Sena," Prakash Javadekar said. 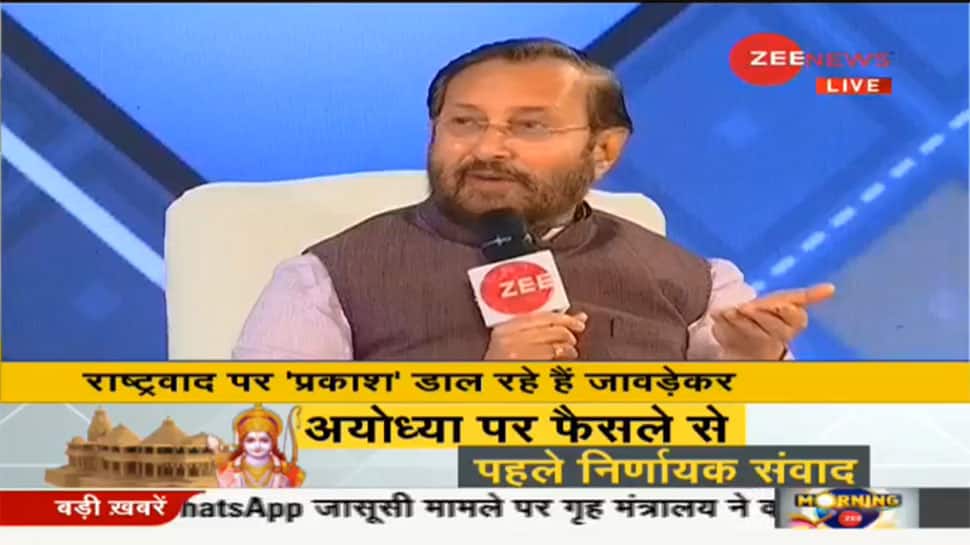 New Delhi: Amid the ongoing tussle between BJP and Shiv Sena in Maharashtra, Union Minister Prakash Javadekar, at Zee News' India Ka DNA Conclave on Friday said that Devendra Fadnavis will indeed by the Chief Minister of the state, but on being asked when will the parties reach an outcome, he said that it "will take time." He also categorically stated that BJP will form the government with Shiv Sena in Maharashtra.

Javadekar also shed some light on the ongoing situation in Kashmir, the opposition's debate on allowing politicians to visit J&K, rise in air pollution in Delhi-NCR and other development projects the BJP is working on.

Here are some of the highlights from Javadekar's session:

- Devendra Fadnavis will become the chief minister of Maharashtra but you'll have to wait for some time for the final decision. Maharashtra will have the government of BJP and Shiv Sena.

- In Maharashtra and Haryana, "The mandate was for the development of the states."

- Referring to the expansion of the BJP across the country due to continuous efforts of PM Modi and Home Minister Amit Shah, Javadekar said, "The opposition will have to stand on their own by their presence and effort."

- People are hopeful that the government will achieve the target of five trillion economy.

- Nobody is prohibited from visiting Kashmir.

- Pakistan-occupied Kashmir (PoK) is a part of India.

- The Ayushmaan Yojana has unleashed a new hope among the poor people.

- Triple Talaq and Article 370 were not political decisions, they were for the people of the nation. People have welcomed the decision on Article 370.

- On the emergence of the new Kashmir, Javadekar said, "The real Kashmiriyat lies in the assimilation of each and everyone."

- Flaying the recent violence in Jammu and Kashmir, Javadekar said, "The killing of labourers can't be the part of Kashmiriyat."

- The making of eastern and western peripheral ways have reduced pollution in Delhi to a great extent.

- To stop the burning of biomass in Delhi, the Centre took the steps to curb it.

The India Ka DNA Conclave is being held in New Delhi with an aim to focus on issues like nationalism, Jammu and Kashmir, unemployment and the upcoming assembly election in Delhi.

JJP made an alliance with BJP in the interest of Haryana: Deputy CM Dushyant Chautala