Getting US waiver on S-400 Triumf missile defense system won't be easy for India: Experts

Under the CAATSA, India is subject to sanctions now that it has entered into an agreement with Russia to purchase S-400 Triumf missile defense system. 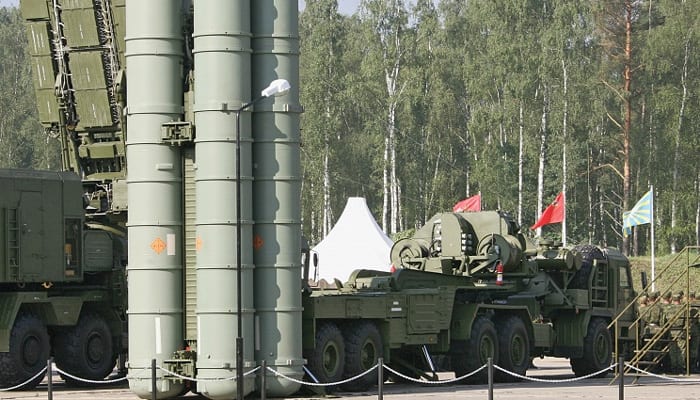 Washington: For India, getting a US presidential waiver from the biting CAATSA (Countering America's Adversaries Through Sanctions Act) sanctions might not be that easy, some American experts believe referring to the changing political dynamics within the administration and President Donald Trump's personal strong views against New Delhi's trade and tariff policies and calling it a "tariff king".

Under the CAATSA which was signed into law last year, India is subject to sanctions now that it has entered into an agreement with Russia to purchase S-400 Triumf missile defense system in USD 5.4 billion, which is considered by the US as a significant purchase.

The CAATSA gives the Trump administration more ways to target Russia, Iran and North Korea with economic and political sanctions.

Only last month, US had used CAATSA to impose sanctions on Chinese entities for purchase of S-400. Friends of India in the US hope that New Delhi will receive a presidential waiver, given that Trump Administration has recognised India as a major defense partner and is in advance stage of selling billions of dollars' worth of equipment to India in the next few years.

Congressional sources say that both Defence Secretary Jim Mattis and Secretary of State Mike Pompeo pushed for a presidential CAATSA waiver keeping India in mind. But the final decision will be taken by Trump, who in the last several weeks has been very critical of India's trade and tariff policies.

Last week, Trump described India as a "tariff king" and said India wants to have a trade deal with the US after he warned them of imposing additional tariffs on their imports. His latest statements have made some experts feel that the presidential waiver might not be that easy.

Anish Goel, who served in the Obama White House and was a key staffer of the Senate Armed Services Committee for several years, said that National Defense Authorization Act (NDAA) 2019 does not automatically grant a waiver from sanctions for India's defense purchases from Russia.

"The language is non-country specific and merely gives the Administration the authority to grant a waiver if it desires. The ultimate decision is up to the Administration," said Goel, senior fellow at New America think-tank.

"In this case, obtaining such a waiver is not a foregone conclusion. While Mattis is likely a strong supporter of granting one, and many believe he advocated for the legislation because of India's unique situation, there are others in the administration who will oppose giving India special treatment, particularly when it comes to the proliferation of the S-400. It is hard to predict whose arguments will win out," Goel told PTI in response to a question.

Bharat Gopalaswamy from Atlantic Council think tank hoped that India will finally get the presidential waiver given the strong relationship that the two countries have.

"I am hopeful that the US would grant India the necessary waiver acknowledging the fact that India is on a positive trajectory towards getting closer to the US and these issues are just a 'passing cloud'," he told PTI.

"As we are all aware, India has had a path dependency with Russia for the supply of their military hardware. While India is diversifying their sources of military supplies, in the short run, it is resorting to systems from Russia to ensure that its security is not compromised," he said.

"We have to remind ourselves that US-India relationship in this sphere is less than two decades because in 1998 India was a target of US sanctions. I also understand that India had fewer alternatives," he noted.
But some Congressional sources who closely follow the Trump Administration are quick to point towards the changing dynamics inside the administration.

Based on Mattis's strong advocacy for the CAATSA waiver authority in this year's NDAA, the Indian government likely believes that obtaining a waiver from the sanctions will be relatively straightforward, an informed Congressional source said.

"I don't know if this played any role in India's decision to move ahead with the S-400 purchase, but it's possible that India felt safe that the purchase would not harm US-India relations or incur CAATSA-related sanctions," said the source.

"However, whether India actually gets the waiver will largely be up to National Security Advisor (John) Bolton, who has long been against giving India any special treatment," sources told PTI.

"In addition, the Trump administration has stated that limiting proliferation of the S-400 missile system is one of their strategic priorities, and recently levied sanctions against China for its purchase of the S-400. It is certainly within the realm of possibilities that the administration will not look too kindly on India's actions and decide to levy sanctions against India," the Congressional source said.

"In the end, I think it will come down to who has more influence in this debate - Mattis or Bolton. (Pompeo's personal position is a bit unclear.) I don't know the answer to that question - Mattis's star seems to be fading just a touch and Bolton seems to be ascendant and taking over foreign policy formulation. So it's quite possible that India's faith in getting a waiver is mistaken," the sources said.