According to the MHA, the government's zero-tolerance policy is yielding good results in J&K. 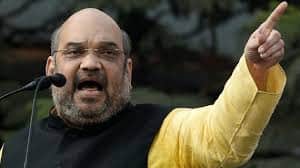 NEW DELHI: Union Home Minister Amit Shah has said that the NDA government's policy of zero tolerance towards terrorism will continue in the state of Jammu and Kashmir.

In addition to it, the Home Minister further stated that establishing rule of law and taking action against the high and mighty alleged to be involved in corruption will remain a top priority for the Ministry of Home Affairs (MHA).

The Home Minister has given clear instructions to the security forces to not let any criticism affect them and continue with its zero-tolerance policy.

According to the MHA, the government's policy is yielding good results in the J&K.

In the first five months of this year, as many as 101 terrorists have been eliminated by security forces in Jammu and Kashmir, an average of 20 terrorists are being eliminated every month.

What has still become a major issue of concern for the MHA is the fact that despite these successes, homegrown terrorism is yet to be brought under control.

Several youths in Jammu and Kashmir have joined various pro-Pakistan terror outfits in the recent past.

On Monday, Shah had met the Governor of J&K, Satya Pal Malik, who briefed him about the situation in the terrorism-hit state during the holy month of Ramzan.

During a meeting to take stock of the internal security situation on Monday, Mr Shah was briefed about the situation in the Kashmir valley during Ramzan.

The BJP government had last year announced the anti-terror operations during Ramzan, but despite the goodwill measure taken by the government, there were 18 grenade attacks by terrorists, in which 31 people were injured.

In total, there were nearly 37 attacks, in which 12 persons were killed and 41 were injured.

This year, only three grenade attacks have taken place. Altogether, there have been seven terror attacks in which three persons died and one person injured.

In the hour-long meeting, which was attended by National Security Advisor Ajit Doval, Director Intelligence of Bureau Rajiv Jain and Home Secretary Rajiv Gauba, a strategy to deal with terrorists in Kashmir Valley was discussed.

Recent action taken by various central government agencies like ED, NIA, CBI, CBDT and various agencies of J&K Government against those involved and linked to the terror financing network having its roots in Pakistan clearly reflects the Modi government's hardened stance against terrorism.

In the recent past, action has been initiated against Zahoor Watali and many others for financing terror and creating unrest in Kashmir Valley, which includes attaching the properties of terror financiers in Gurgaon and J&K.

The arrest of Kashmiri separatists – Asiya Andrabi, Masrat Alam and many others and the action against the chairman of J&K Bank is one more step in this direction to bring the high and mighty before the law.