This was the third meeting between Modi and Oli this year. They met earlier during Oli's visit to India in April and the subsequent visit of PM Modi to Nepal in May. 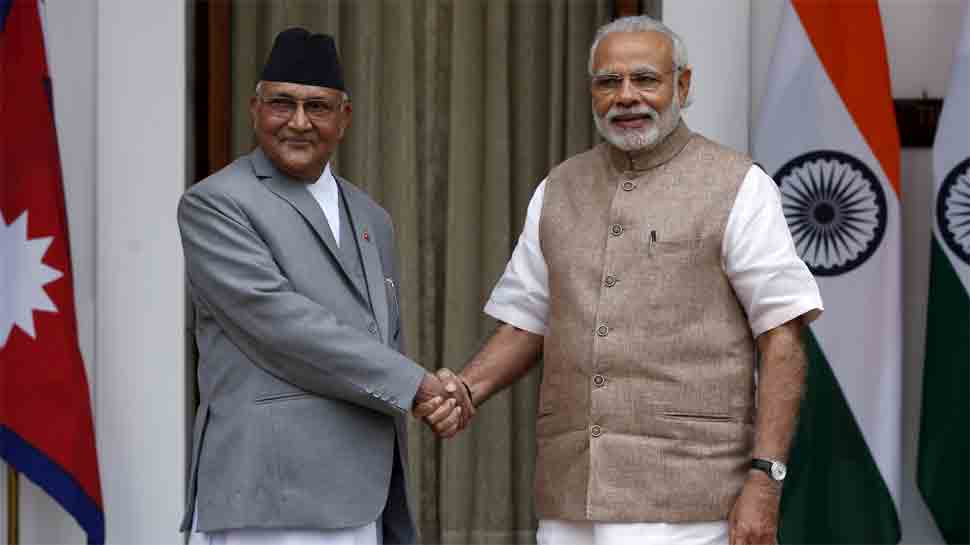 Kathmandu: India and Nepal on Friday exchanged an MoU to build a strategic railway line connecting Bihar's Raxual city to Kathmandu after Prime Minister Narendra Modi held talks on all aspects of the bilateral ties with his Nepalese counterpart K P Sharma Oli.

This was the third meeting between Modi and Oli this year. They met earlier during Oli's visit to India in April and the subsequent visit of Prime Minister Modi to Nepal in May.

"Our deliberations were wide-ranging, covering multiple aspects of India-Nepal relations," Prime Minister Modi said after the meeting on the sidelines of the 4th BIMSTEC Summit here. "We discussed ways to further deepen our economic, trade and cultural ties. Enhancing connectivity between our nations was discussed as well," he added.

The Prime Minister also expressed his gratitude to the Nepal government for their heart-warming gesture of translating late former Indian PM Atal Bihari Vajpayee's poems into the Nepali language. Invoking Vajpayee, who he considered as his political mentor, Prime Minister Modi said that at the time of his demise, Nepal stood with India in the hour of grief.

I thank PM Oli ji and Nepal Government for this touching gesture of translating Atal ji's poems into Nepali language, its a fitting tribute: PM Narendra Modi in Kathmandu pic.twitter.com/WaHbLWIPyY

Ministry of External Affairs spokesperson Raveesh Kumar said that the two leaders held a detailed review on all aspects of the bilateral relationship. They had a 'warm meeting', Kumar added.

"Following the talks, PM @narendramodi and PM of Nepal K.P. Sharma Oli witnessed the exchange of an MoU between the Government of India & the Government of Nepal regarding preliminary engineering-cum-traffic survey of the broad gauge line between Raxaul (India) & Kathmandu (Nepal)," Kumar tweeted.

The MoU was signed by Secretary at the Ministry of Physical Planning and Works, Madhusudan Adhikari, from Nepali side and Manjiv Singh Puri from the Indian side. In consultation with the Government of Nepal, India's Konkan Railway Corporation Ltd. Will be conducting a preliminary engineering-cum-traffic survey of the new rail line.

The Raxaul-Kathmandu rail line is expected to expand connectivity by enhancing people-to-people linkages between the two countries and promoting economic growth and development, said Indian Embassy in a press release.

The signing of the MoU comes two years after China agreed to construct a strategic railway link with Nepal through Tibet with an apparent aim of reducing the Himalayan nation's dependence on India. It also comes in the backdrop of recent Chinese linkages with Nepal as it took on building three highways to be completed by 2020. The two countries have recently also signed a transit treaty.

This agreement also comes years after a sense of mistrust had prevailed when certain sections in Nepal blamed India for the 135-day blockade in 2015 - 2016 that had crippled Nepal's economy. There are three other railway projects in the pipeline -- New Jalpaiguri-Kakarbhitta, Nautanwa-Bhairahawa and Nepalgunj Road-Nepalgunj.

Earlier, Prime Minister Modi had a series of bilateral meetings, including discussions with his counterparts from Thailand and Bangladesh, on the sidelines of the 4th BIMSTEC Summit here. He also held talks with presidents of Sri Lanka and Myanmar.

The Bay of Bengal Initiative for Multi-Sectoral Technical and Economic Cooperation (BIMSTEC) is a regional grouping comprising India, Bangladesh, Myanmar, Sri Lanka, Thailand, Bhutan and Nepal. The grouping accounts for 22 percent of the global population, and has a combined gross domestic product of USD 2.8 trillion.