Prime Minister Narendra Modi said that the “dreams and aspirations of the youth of India” are at the heart of the various transformations and reforms initiated by his government in the country. 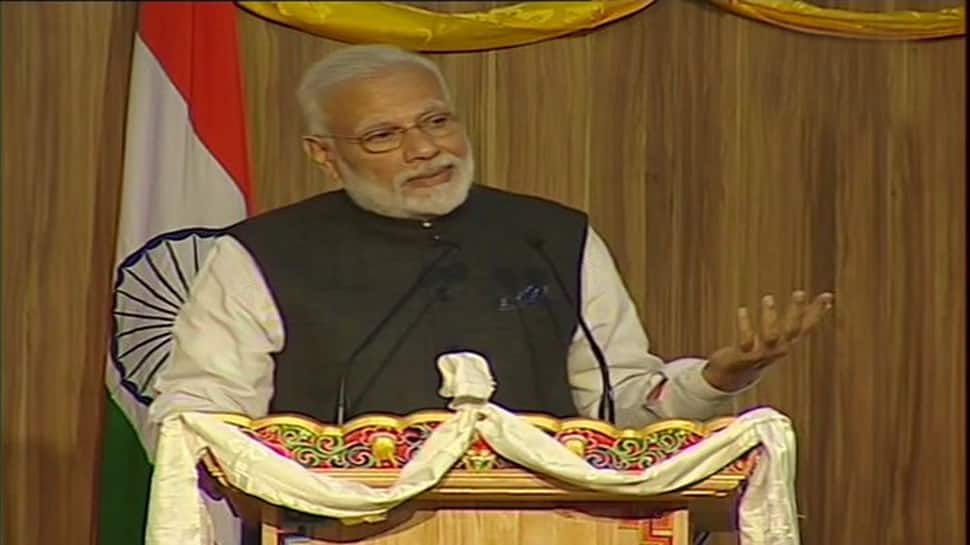 Prime Minister Narendra Modi, who is on a two-day visit to Bhutan, on Sunday said that “India is eliminating poverty faster than ever before”, even as he claimed that the country is “witnessing historic transformations in a wide range of sectors”.

Addressing students at the Royal University of Bhutan, Prime Minister Modi said that the “dreams and aspirations of the youth of India” are at the heart of the various transformations and reforms initiated by his government in the country.

“India is eliminating poverty faster than ever before…The pace of infrastructure construction has doubled in the last five years,” said the Prime Minister, adding that there are “young minds” that could overcome all challenges with “innovative solutions”.

Addressing students at the Royal University of Bhutan. Watch. https://t.co/eGoTRXS1bI

“India is home to the world’s largest healthcare programme, Ayushman Bharat that offers health assurance to 500 million Indians…India has among the cheapest data connectivity in the world, which is directly and indirectly empowering millions,” said Prime Minister Modi.

He added, “India is also home to among the biggest start-up eco-systems in the world. This is indeed a great time to innovate in India!” “These, and many other transformations have dreams and aspirations of the youth of India at their core.”

“A few days back, my good friend, Prime Minister Dr. Tshering wrote a Facebook post that touched my heart. In that post he mentioned about Exam Warriors, a book I wrote to advise youngsters about how to face exams without stress,” Modi said.

“Much of what I wrote in Exam Warriors is influenced by the teachings of Lord Buddha, especially the importance of positivity, overcoming fear and living in oneness, be it with the present moment or with Mother Nature,” he added.

Talking about the ties between the two countries, the Prime Minister said that “people of Bhutan and India experience great attachment to each other”.

He said, “We are close not just due to our geography. Our history, culture and spiritual traditions have created unique and deep bonds between our peoples and nations.”

JNU must be renamed after Modi, suggests Hans Raj Hans over Article 370 abrogation