Kerala as dear to me as Varanasi, says PM Narendra Modi in Guruvayur

Having won a massive mandate, Prime Minister Narendra Modi on Saturday said political parties and pundits failed to gauge the public mood ahead of the Lok Sabha election and thanked the electorate for reposing confidence in the saffron party. 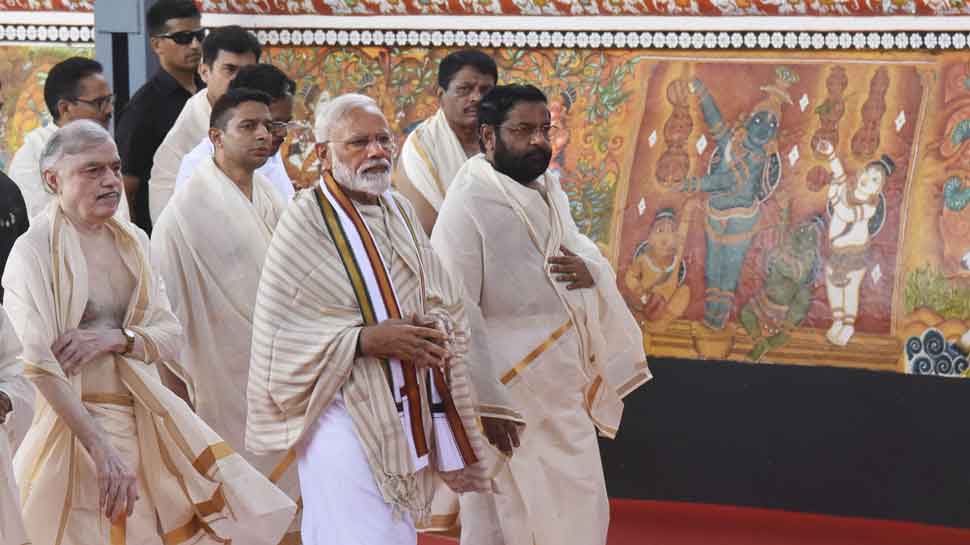 Guruvayur: Having won a massive mandate, Prime Minister Narendra Modi on Saturday said political parties and pundits failed to gauge the public mood ahead of the Lok Sabha election and thanked the electorate for reposing confidence in the saffron party.

In his first public engagement after leading the BJP to a grand victory in the general election, retaining power for a successive term, Modi said he made Kerala his first stop after the win despite having no MP from the state since it was as dear to him as his constituency Varanasi in Uttar Pradesh.

Terming the just-concluded Lok Sabha election to 542 seats as a "festival of democracy," Modi lauded and thanked the electorate of Kerala for their contribution to it.

The country has seen that "people are God" in elections, he said. "Political parties and political pundits could not gauge people's mood. So did those involved in conducting (poll) surveys. But people gave a strong mandate for the BJP," he said and thanked the voters for choosing his party.

The recent polls proved that people rejected "negativity" and accepted positivity, he said.

On making Kerala his first stop post the LS polls win, Modi said some would have even wondered why he chose the southern state despite BJP "not opening its account" from here in the Parliament. But an elected leader was common to all, he said.

"Elections have their place in democracy and it is the responsibility of the winner to take care of 130 crore people. Those who made us win or those who did not, both are our (people). Kerala is as dear to me as Varanasi is," Modi said.

The BJP was not working for mere electoral politics and was keen on building the country and ensuring India gets its place of pride in the international arena, Modi added. On the Nipah virus issue, he said the Centre was working "shoulder-to-shoulder" with the Kerala government to provide all required assistance.