Over three dozen people lost their life after they got struct by lightning in various parts of Uttar Pradesh. The deaths were reported in a single day. PM Narendra Modi has expressed his anguish at the deaths and announced a relief for the kin of the victims. 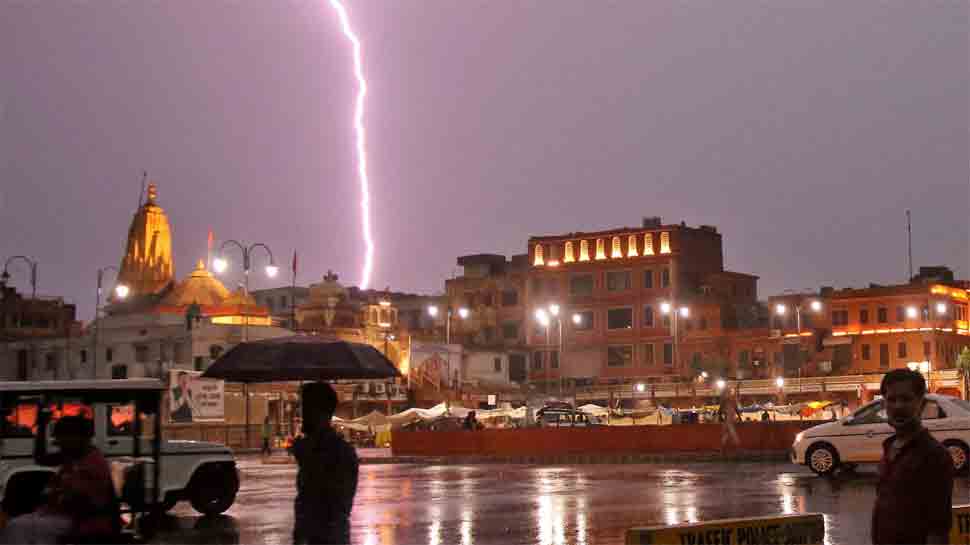 New Delhi: Lightning created havoc on Sunday (July 11) evening after at least 56 people died after being struck by it in a single day. According to reports, while 38 died in Uttar Pradesh, 18 people lost their lives in Rajasthan, as many parts of north India received incessant rainfall on Sunday.

In Uttar Pradesh, 14 people died in Prayagraj alone, five in Kanpur Dehat, three each in Firozabad and Kaushambhi and two each in Unnao and Chitrakoot after lightning struck them. Taking cognizance of the incidents, Chief Minister Yogi Adityanath expressed his grief and directed the district administrations to provide adequate compensation to the tragedy struck families. According to the government spokesman, deaths were also reported from Kanpur, Pratapgarh, Agra, Varanasi and Rae Bareli.

In Kaushambhi, the deceased have been identified as Rukma,12, Moorat Dhwaj, 50, Ramchandra, 32, and Mayank Singh,15. In Firozabad, Hemraj, 50, and Ram Sevak, 40, were standing under a Neem tree, when they were hit by lightning, killing them on the spot. Amar Singh, 60, of Shikohabad area was also killed by lightning.

In Rajasthan, 18 people were killed in separate incidents of lightning in the districts of Jaipur, Kota, Jhalawar and Dholpur. The victims also included seven children. Twenty-one people, including six children, were also injured in lightning incidents in separate villages in Rajasthan.

In a major tragedy in Jaipur, 11 persons, mostly youths, were killed and eight others injured when lightning struck them on a hill near the Amber Fort, officials said. Some of them were taking selfies on a watch tower while the others were on the hill.

Rajasthan Chief Minister Ashok Gehlot has announced a compensation of Rs 5 lakh each for the family members of the deceased.

Prime Minister Narendra Modi expressed his condolences over the deaths due to lightning in Rajasthan. "Many people have lost their lives due to lightning in some areas of Rajasthan. Deeply saddened by the demise of people. I express my deepest condolences to the families of the deceased: PM @narendramodi," Prime Minister’s Office (PMO) said in a tweet.