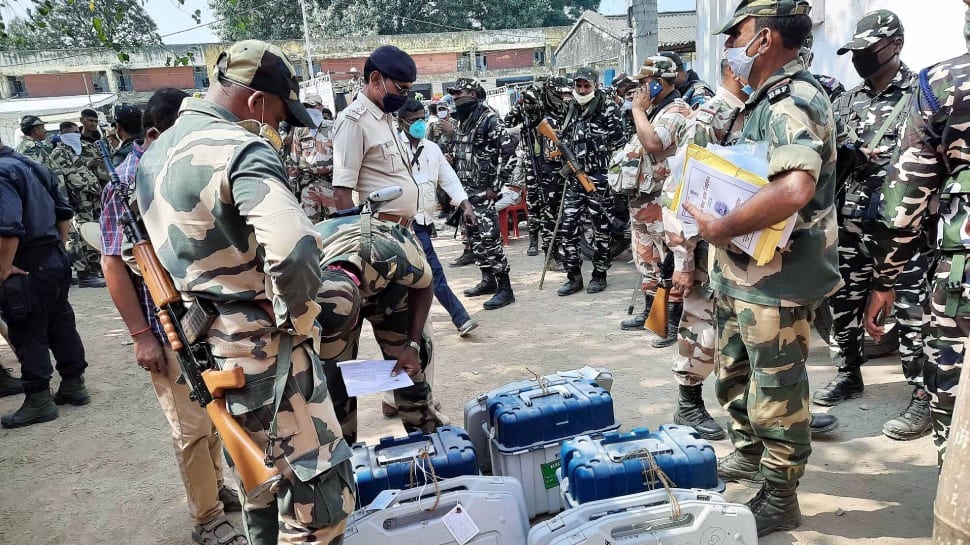 Patna: Polling in the first phase of Bihar assembly election 2020 for 71 seats is taking place amid strict COVID-19 safety protocols on Wednesday (October 28, 2020). As per Election Commission data around 2.14 crore voters will be exercising their voting rights which include 1.01 crore women and 599 of the third gender.

For the 71 assembly constituencies, the RJD has fielded 42 candidates, while fate of JDU's 35, BJP's 29, Congress' 21s, eight CPI-ML, six HAM and one VIP candidate will be sealed today. Among other parties, there are 43 candidates of RLSP, 42 of LJP and 27 of BSP.

The voters of 71 assembly constituencies will turn out in their respective polling booths between 7 AM and 6 PM. The campaigning for the first phase of the Bihar Assembly ended on Monday. The Bihar assembly election 2020 will have three phases of voting where the country will witness the first phase on Wednesday (October 28).

Bihar Assembly polls: Political greenhorns too trying their luck in the first phase

Of the 71 assembly seats, the RJD has fielded 42 candidates. The fate of JDU's 35, BJP's 29, Congress' 21s, eight of CPI-ML, six of HAM, and one candidate of VIP will also decided in the first phase. Other parties including 43 of RLSP, 42 of LJP, and 27 of BSP, are also expecting to win maximum seats.

Chief Minister Nitish Kumar is eyeing for a fourth term. In 2015, Nitish Kumar-led Janata Dal (United) fought polls with Rashtriya Janata Dal (RJD) and Congress as part of Mahagathbandhan. The BJP-led NDA had fought elections with LJP and other allies. JD-U later returned to NDA and formed the government.

Due to the ongoing pandemic, the EC has issued strict guidelines for the safe conduct of the electoral exercise. These include lowering the cap on the maximum number of voters for a polling booth to 1,000, staggered timings of polling hours and postal ballot facility for those aged above 80, or those afflicted with or suspected to be infected.

The voter turnout up to 6 pm in the first phase of Bihar Assembly Election has been recorded at 53.30 per cent. Here is the detailed poll percentage:

Ramgarh: Clashes between supporters of two parties have been reported at the 122 and 123 polling booths in the Ramgarh assembly.

Just like you can save your self from #COVID19 with a mask, similarly with a single vote you can save Bihar from becoming 'bimar': Prime Minister Modi in Patna

Congress knows how to run country, how to stand with farmers, give employment, but we don't know how to lie: Rahul says attacking PM Modi.

RJD leader Tejashwi Yadav on Wednesday demanded a High Court-monitored probe into the Munger incident in which one person was killed and over two dozen others, including security personnel, were injured in firing and stone-pelting during goddess Durga idol immersion. Yadav made a scathing attack on Chief Minister Nitish Kumar and his deputy Sushil Kumar Modi, asking who gave permission to the Munger police to act like "General Dyer".

The party which is infamous for closing down industries of Bihar, from whom investors maintained distance, is today promising development to the state's people. Let alone govt jobs, if they come to power even private companies will flee from Bihar: PM in Muzaffarpur.

Bihar elections is an opportunity to re-elect those who pulled state out of darkness, says PM Modi at election rally in Muzaffarpur.

You can imagine what will happen to the funds for COVID-19 if they come to power... What else can people of Bihar expect from the 'Yuvraj' (prince) of 'Jungle Raj', given their past record. You know them better than I do: Prime Minister Narendra Modi in Muzaffarpur (ANI)

As voting for phase 1 of Bihar Assembly elections began, Congress MP Shashi Tharoor reminded voters of the struggles that migrant workers went through at the beginning of nationwide lockdown due to COVID-19 pandemic. "The tears in your eyes, the blisters on your feet. Do you remember everything? The ones who are voting today," Tharoor wrote on Twitter.

BJP candidate from Jamui and ace shooter Shreyasi Singh casts her vote at a polling booth in Naya Gaon area of the district.

Bihar: BJP candidate from Jamui and Shooter Shreyasi Singh casts her vote at a polling booth in Naya Gaon area of the district. pic.twitter.com/zBe2DQOeio

Voter turnout of 18.48% per cent recorded till 11am in the first phase of Bihar polls. Over 2.14 crore voters will decide the fate of 1,066 candidates contesting for 71 seats.

"Those preceded us in government were too obsessed with their "commission", never cared about connectivity in regions like Mithila," says PM Modi at Bihar rally.

Today first phase of polling is underway. I would like to request everyone to follow all precautionary measures against #COVID19. I pray for the speedy recovery of everyone who has been infected with the disease: Prime Minister Modi at rally in Darbhanga.

"People of Bihar have taken a resolve to again defeat those who brought 'jungle raj' in the state, those who looted Bihar. These are the people under whose government crime was rampant in the state", Prime Minister Modi in Darbhanga.

"A grand Ram Temple is being built in Ayodhya... those in politics who used to ask us a date (of temple construction) are now compelled to applaud... It is the identity of BJP and NDA, we do what we promise," says PM Modi.

Congress' Bihar in-charge Shaktisinh Gohil accuses BJP of using LJP's Chirag Paswan. "BJP wants to keep 'Chirag' in their hand to light up their home & burn down Nitish Ji's house... BJP wants to use Chirag first, then get rid of him later," he told ANI.

Bihar Minister and BJP leader Prem Kumar arrives at a polling booth in Gaya to cast his vote wearing a mask with his party's symbol. #BiharElections2020 pic.twitter.com/PAerqVerNs

A voter in Bihar's Sasaram died due to deteriorating health while polling for the .st phase of elections. Hira Mahto, 65, died at polling station number 151 in middle school of Sanjhauli at Udaipur.

Bihar 1st phase of polling: BJP polling agent Krishna Kumar Singh dies of heart attack at booth number 258 at Phulma village in Hisua assembly. The family said that while sitting at the polling booth, he experienced sudden chest pain and was taken to Sadar Hospital for treatment where doctors declared him dead.

Bihar 1st phase of voting recorded 6.03% voter turnout till 9 AM, voting to continue till 6 PM. 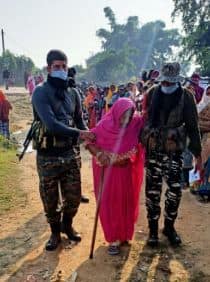 Visuals from booth no 10 at Chakarbandha, Gaya district, Bihar. 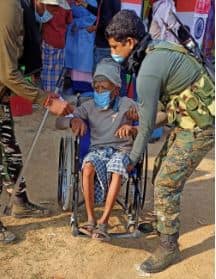 Bihar 1st phase of polling: 6.03% voter turnout till 9 AM, voting to continue till 6 PM 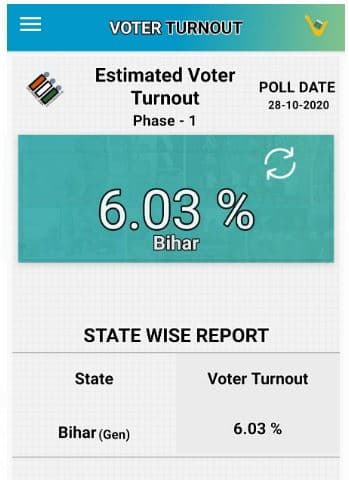 Congress leader Rahul Gandhi readies for the second round of campaigning in Bihar he will address rallies at Valmiki Nagar and Kusheshwar Asthan in Darbhanga today. 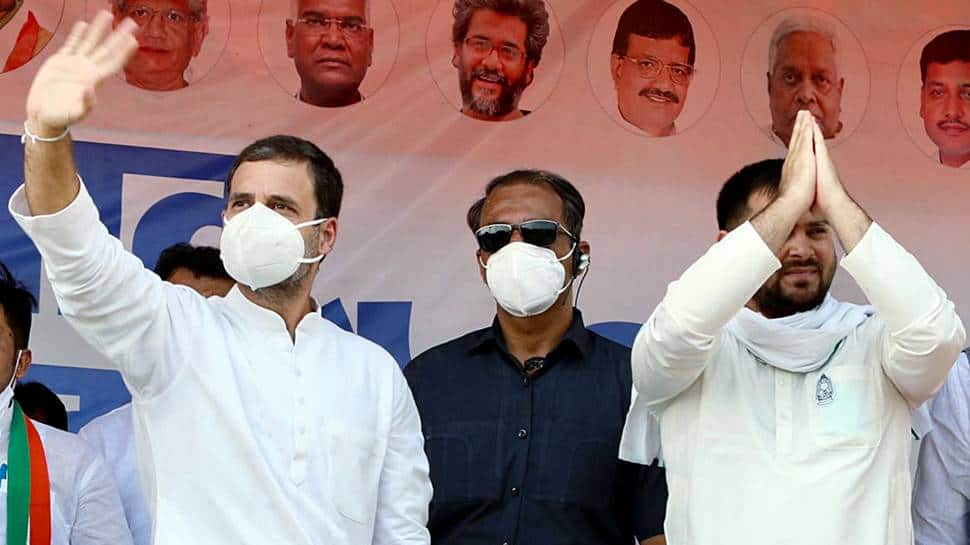 CM Nitish Kumar takes to Twitter urging people to vote. He said,"In a democracy, voting is not just a right but also a responsibility. In the first phase of Bihar assembly elections, voting is on 71 seats today. If you are a voter of these areas, then please take the time to vote. One vote of yours can keep the pace of development in Bihar and make it a developed state."

Congress leader Rahul Gandhi urges people to vote. "This time for justice, employment, and farm labor you must vote for the grand alliance. Good luck to all as the first phase of voting for Bihar begins," he tweeted.

Read here on how to cast vote using EVM and VVPAT

Union Minister Giriraj Singh casts his vote at a polling booth in Lakhisarai. 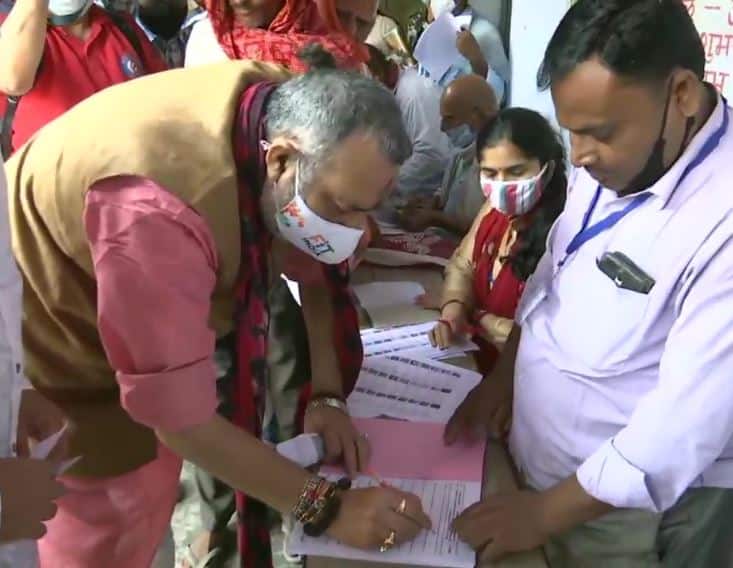 Prime Minister Narendra Modi makes a vote appeal on Twitter urging people to follow COVID-19 rules while voting, He said: "Today is the first round of voting in Bihar assembly elections. I urge all voters to ensure their participation in this festival of democracy, taking precautions related to COVID. Keep a distance of two yards, wear a mask. Remember, first vote, then refreshment!"

RJD's Tejashwi Yadav made a vote appeal on Twitter, saying: "Today, as 1st phase of voting is underway, Biharis must exercise their franchise for a better future, education, health, job, development and to usher a new phase in the creation of new Bihar and become a partner of change with the Grand Alliance."

Prime Minister Narendra Modi will hold rallies in Darbhanga, Muzaffarpur and Patna as Bihar goes to polls in 71 seats in the first phase of Bihar assembly election 2020 on Wednesday (October 28, 2020). Read more here

As voting begins for the 1st phase of Bihar Assembly polls amid the COVID-19 pandemic, the EC has issued a voter guide - an illustrative guide for voters to cast their vote in a COVID safe manner.

In the first phase, the main contest is between the National Democratic Alliance (NDA)-led by the BJP and the opposition parties. In some areas, other political parties and independents are also trying to make the competition triangular.

Polling for the 1st phase begins at 7 am and will continue till 6 pm.

Voting for the first phase of #BiharElections underway; visuals from a polling station in Gaya pic.twitter.com/LOlxKLX09J