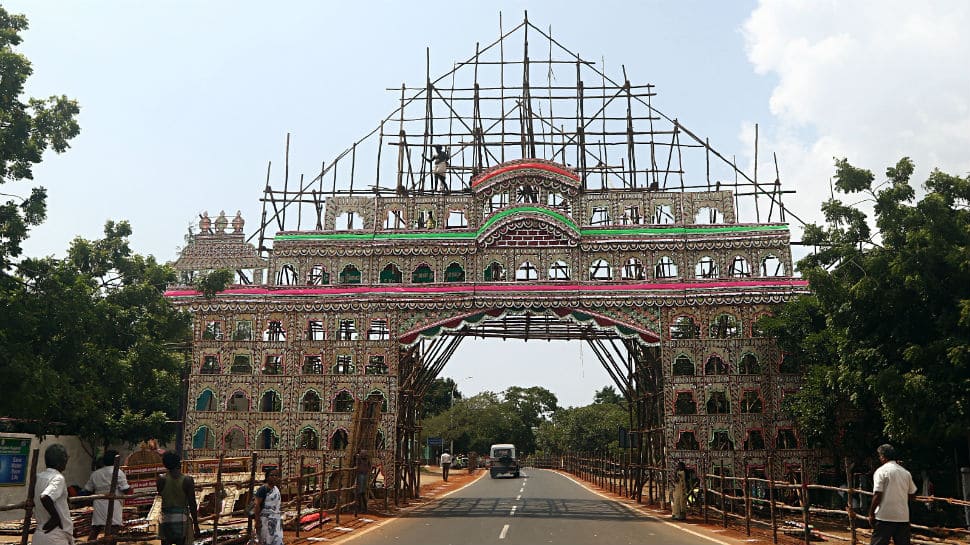 Mamallapuram (Tamil Nadu): Department of Horticulture here has decorated a huge gate near 'Panch Rathas', where Prime Minister Narendra Modi and Chinese President Xi Jinping are expected to visit later in the day.

Around 200 staff members and trainees of the departments spent almost 10 hours to decorate the gate. Almost 18 types of vegetables and fruits have been used in the decoration.

Interestingly, the vegetables and fruits have been brought here from different parts of the state.

While talking to ANI, Tamilvendhan, Additional Director, Department of Horticulture, informed that most the vegetables are organic and directly brought from the farms.

Besides this, traditional banana trees have been planted near Shore Temple here for the grand welcome of Prime Minister Modi and Xi Jinping. Red and white roses have also been used for decoration.

The Chinese President is arriving in India for his second informal summit with Prime Minister Modi.

Xi will be accompanied by China's Foreign Minister Wang Yi and Politburo members on his visit to India. From the Indian side, National Security Advisor (NSA) Ajit Doval and External Affairs Minister (EAM) S Jaishankar will accompany the Prime Minister.

The historic coastal town of Mamallapuram will provide the setting for the meeting between Modi and Xi as the two leaders will have tete-a-tete as also delegation-level talks to strengthen bilateral ties.

The Informal Summit will provide an opportunity to the Chinese President and PM Modi to continue their discussions on overarching issues of bilateral, regional and global importance and to exchange views on deepening India-China Closer Development Partnership, the External Affairs Ministry said in a statement. This summit will mostly be similar to the first, held on April 2018 in Wuhan, China.

Xi will arrive at the Chennai International Airport in the afternoon, while the Indian Prime Minister will reach the city shortly before noon.

They will have guided tour of three monuments - Arjuna's penance, an intricately carved ancient sculpture; Krishna's Butter Ball - a big round boulder perched on a slope; and Pancha Rathas - a five chariots monument complex.

The historical city also has a China connection and has had ancient maritime links with the country during the Pallava dynasty.

A cultural programme will be organised in honour of the visiting leader at the Shore Temple in the evening. Modi will then host the Chinese President for dinner.

On Saturday, Modi and Xi will have one-to-one meeting followed by delegation-level talks.

No Memorandum of Understandings (MoUs), agreements would be signed or joint communique issued.

7 dead as bus mows down sleeping pilgrims in UP's Bulandshahr