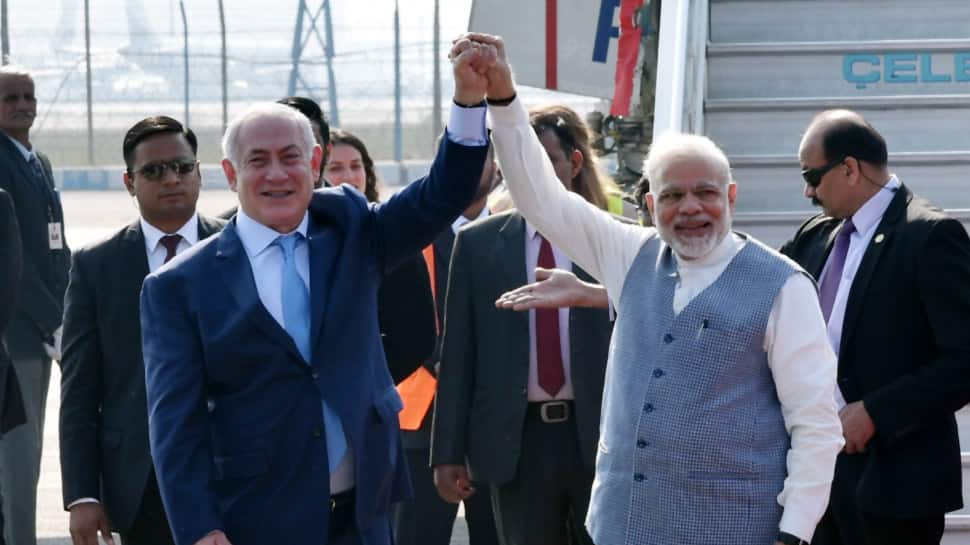 PM Modi received Israel PM Netanyahu at the airport on Sunday, in a departure from protocol. (Picture: MEA)
Share:
Written By:

Netanyahu's six-day visit to India is heavy with undercurrents of global political alignments. He is only the second Israeli PM to visit India, after Ariel Sharon's visit in 2003. His visit comes as a reciprocation for PM Modi's trip to Israel in July last year, the first ever for an Indian PM.

Netanyahu will receive a ceremonial welcome at the Rashtrapati Bhavan around 10:30 am. After this, he is scheduled to pay his respects at MK Gandhi's memorial at Raj Ghat.

Netanyahu will then meet with Prime Minister Narendra Modi at Hyderabad House, the official banquet hall of the Government of India for visiting foreign dignitaries. The two leaders, who identify each other as friends, will take part in delegation-level talks.

PM Modi and Netanyahu will then be present for the signing of various agreements between India and Israel in the areas of cyber, space, film production and energy. They are expected to address a joint news conference around 1 pm.

Modi and Netanyahu together will take part in the 2nd India-Israel CEOs Forum and the India-Israel Business Summit in the evening. The first edition of the summit had been held last year, during PM Modi's visit to Israel.

Netanyahu was received at the airport by PM Modi himself, in a departure from protocol, much as he had been received on the tarmac by the Israeli PM on his visit to the country. Netanyahu too has gone out of his way to set up favourable optics for this visit, calling India a global power.