The police have also recovered two .32 bore Pistols, along with 4 magazines and ammunition from the possession of accused persons besides an Etios car bearing a fake registration number. 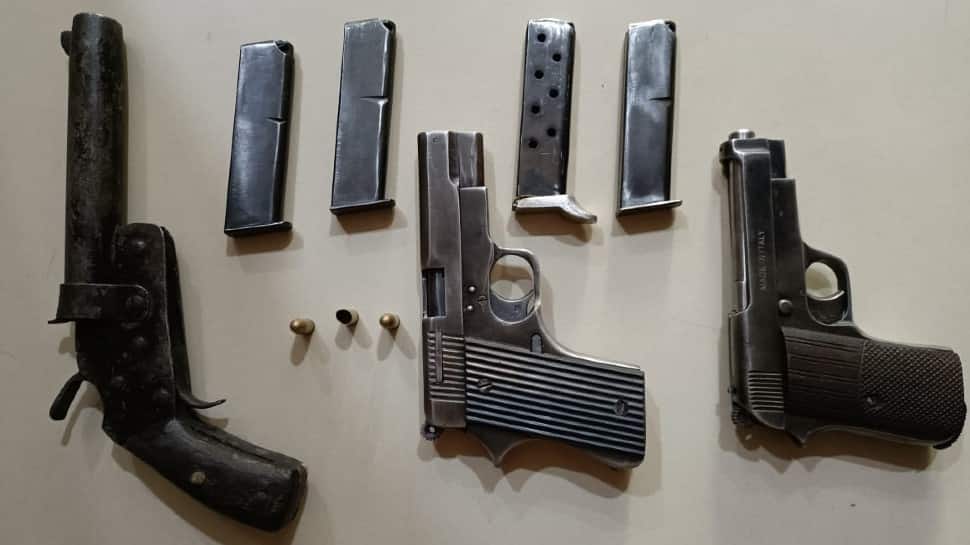 Chandigarh: Punjab Police on Tuesday (July 6) said that they have busted a target killing module backed by Khalistan Liberation Force (KLF) handlers based abroad with the arrest of its 4 operatives, including a former Indian Army Sepoy, who had managed to escape from Patiala Jail in April.

Director General of Police (DGP) Punjab Dinkar Gupta said that accused Jaspreet Singh alias Noopi, who had joined the Indian Army as a Sepoy in 2012, was lodged in jail in a murder case in 2017.

“After escaping from Jail, Noopi came in contact with foreign-based KLF handlers who motivated and induced him to raise a terror module to carry out targeted killings in the state,” he said.

The other three arrested persons have been identified as Jaswinder Singh, a resident of village Fatehpur Bunga in Ropar, Gaurav Jain alias Minku of village Kaliawala in district Sirsa and Parshant Silelan alias Kabir, a native of Meerut UP and presently staying at Dhanas in Chandigarh, the DGP added.

Sharing details, SSP Khanna Gursharan Singh Grewal said that, following inputs, the police stopped an Etios car during special checking at GT Road Khanna and three persons, who got out of the car, tried to flee after opening fire at the Police Party. "However, the police party managed to nab Jaswinder and Minku on the spot, while Noopi was arrested later, along with Kabir, his other accomplice," he said.

The police recovered two .32 bore pistols, along with 4 magazines and ammunition from the possession of accused persons besides an Etios car bearing fake registration number PB01AS6845, which had been snatched by Noopi at gunpoint from Zirakpur last month.

DGP Gupta said that during investigations, Noopi confessed to have snatched the Etios car, besides looting Rs 50000 from a Petrol pump in Kharar on July 3, 2021, with the help of his associates.

“Noopi disclosed that he had come in contact with militant anti-India individuals and elements based abroad with links to KLF terrorist outfit, who had funded him from abroad for carrying out target killings in Punjab and also arranged Pistols for him from UP to carry out terror acts in Punjab,” said Gupta, while adding that Noopi also did recce of sensitive targets in Punjab towards in pursuance of his violent intentions.

SSP Khanna said that preliminary investigations had revealed that the module had received funding from abroad via various digital platforms including Western Union, Paytm etc and foreign handlers also provided three weapons to the module from Rudrapur in Uttrakhand.