Sharjeel Imam had allegedly made a seditious statement like "Assam should be cut off from rest of India" during the anti-CAA protests held at Shaheen Bagh. 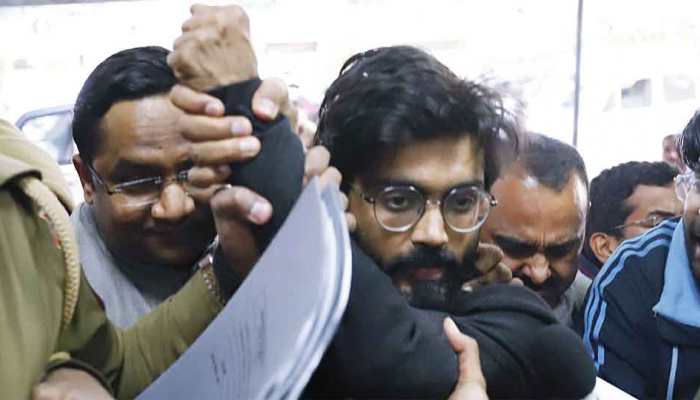 New Delhi: Sharjeel Imam, a research scholar of the Jawaharlal Nehru University, was sent to 4-day police remand by a local court in Guwahati on Thursday. He was brought to Guwahati Railway station in the evening today amid slogans--"Desh Ke Gaddaron Ko Goli Maaron Saalon Ko" and "Sharjeel Imam Murdabaad" --raised by the protestors present at the platform.

Sharjeel Imam was one of the key organisers of Shaheen Bagh protests in New Delhi. He had allegedly made certain seditious statements like "Assam should be cut off from rest of India" during the anti-CAA protests held at Shaheen Bagh.

Taking cognizance of the comment and after verifying the authenticity of the audio clip, the Assam government had reportedly registered a case against him.

Police personnel accompanying him had to throw a cordon around him as media persons and protestors crowded the platform.

Meanwhile, the Delhi Police has named Sharjeel Imam as the instigator behind the violence in Jamia University and the New Friends Colony on December 15 last year.

In its charge sheet, the Delhi Police also placed the CCTV footage, details of the call records and the statements of over 100 witnesses who were examined by it in connection with the case as evidence.

At least 95 people were injured during the violence, out of which 47 are police personnel, the chargesheet filed by the Delhi Police stated. It also said that the police was also probing the role of Popular Front of India (PFI) into the December 15 violence in the national capital.