Nawab Malik said that Shiv Sena was not born to do communal politics rather they came into existence to serve the people of Maharashtra, and added "Shiv Sena was spoiled after joining hand with BJP." 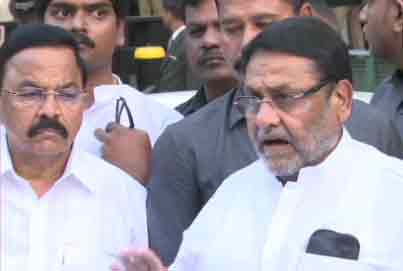 Mumbai: NCP leader Nawab Malik on Tuesday said that alliance of Shiv Sena, Congress and NCP will last for a long time, after Devendra Fadnavis announced his resignation as Maharashtra`s chief minister, hours after the Supreme Court ordered a floor test in the state assembly.

Speaking to reporters, Malik said, "Our alliance (NCP-Shiv Sena-Congress) will last for a long time. This is the start of BJPs end, as it has become very arrogant."  Further, he said that Shiv Sena was not born to do communal politics rather they came into existence to serve the people of Maharashtra, adding "Shiv Sena was spoiled after joining hand with BJP."

He said "Sharad Pawar saheb had said that Uddhav ji will be the Chief Minister and Uddhav ji has also agreed to this," adding that this victory is not for the three parties but for 11 crore people of Maharashtra. "We will try to run a united government for the next 10-15 years."

The NCP leader earlier said, "After the Supreme Court decision, the leaders of three parties sat, they discussed the political situation. And it has been decided that the three parties along with our other smaller ally parties or independents will hold a meeting. They will be informed of the situation. We will elect a leader of our alliance that exists, today evening."

NCP spokesperson told reporters, "Yesterday we paraded 162 MLAs. But in the floor test in the Assembly we will get more than 165 votes as more people are coming back to us."

Notably, Devendra Fadnavis announced his resignation as Maharashtra`s chief minister, hours after the Supreme Court ordered a floor test in the state assembly. Earlier in the day, his deputy, NCP`s Ajit Pawar also resigned from the post, just three days after he was sworn in.

"We realised that we don`t have the required numbers to form the government," Fadnavis told reporters after announcing his decision. Both Fadnavis and Pawar were administered the oath on Saturday morning, nixing Shiv Sena, Congress and NCP`s bid to form government in the state.

Meanwhile, sources have informed that Congress President Sonia Gandhi has given her consent to the Common Minimum Programme (CMP) of the Shiv Sena-NCP-Congress. The CMP to be released after the joint meeting today as the modalities between the alliance parties have been finalized.

In Delhi, former Maharashtra Chief Minister and senior Congress leader Prithviraj Chavan, however, claimed that the three parties will prove majority in the House.