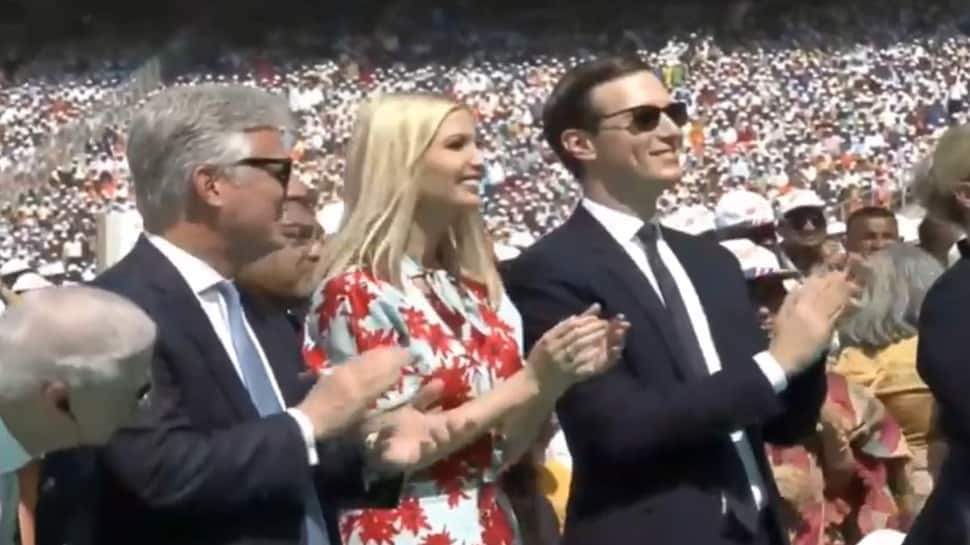 US President Donald Trump's daughter, Ivanka Trump, on Monday called the 'Namaste Trump' event "spectacular" when asked if she enjoyed the event. Thousands of people had gathered at the Motera stadium in Gujarat's Ahmedabad where the event was held. Addressing the event, Trump started his speech with a 'namaste' and called Prime Minister Narendra Modi as his "true friend" saying "America loves India, America respects India."

#WATCH US President Donald Trump's daughter Ivanka Trump on being asked if she enjoyed the 'Namaste Trump' event: Spectacular! pic.twitter.com/L8Q87GcQTj

The US President arrived on Monday in Ahmedabad with his wife Melania and a ministerial delegation that also included his daughter Ivanka and son-in-law Jared Kushner who serve as senior advisors to Trump. Trump was welcomed by PM Modi at the Ahmedabad Airport with a hug.

He announced that the two countries will seal defence deals worth $3 billion on Tuesday. Trump said, "I'm pleased to announce that tomorrow our representatives will sign deals to sell over US$ 3 Billion, in the absolute finest state of the art military helicopters and other equipment to the Indian armed forces."

Trump gave a special shout out to Indian cricket legends Sachin Tendulkar and Virat Kohli while speaking at the Motera stadium, as part of the 'Namaste Trump' event. "This is the country where your people cheer on the biggest cricketers, from Sachin Tendulkar to Virat Kohli, the greatest in the world," said Trump at the event.

As soon as Trump mentioned the names of the two biggest cricketers to come out from India, the entire Motera Stadium erupted in joy and a loud cheer. Even Prime Minister Narendra Modi was seen having a big smile when the names of Tendulkar and Kohli were mentioned.

The `Namaste Trump` event is based on the lines of the `Howdy Modi` programme that was addressed by Narendra Modi and Trump during the Prime Minister`s trip to Houston in September 2019. Around one lakh people gathered for the event. Union Home Minister Amit Shah, Gujarat CM Vijay Rupani, Governor Acharya Devvrat and BCCI president Sourav Ganguly were also present at the stadium.