Devarapalli Prakash Rao, known as 'chai bechne-wala guru', has been providing education to slum children through the money earned from selling tea. 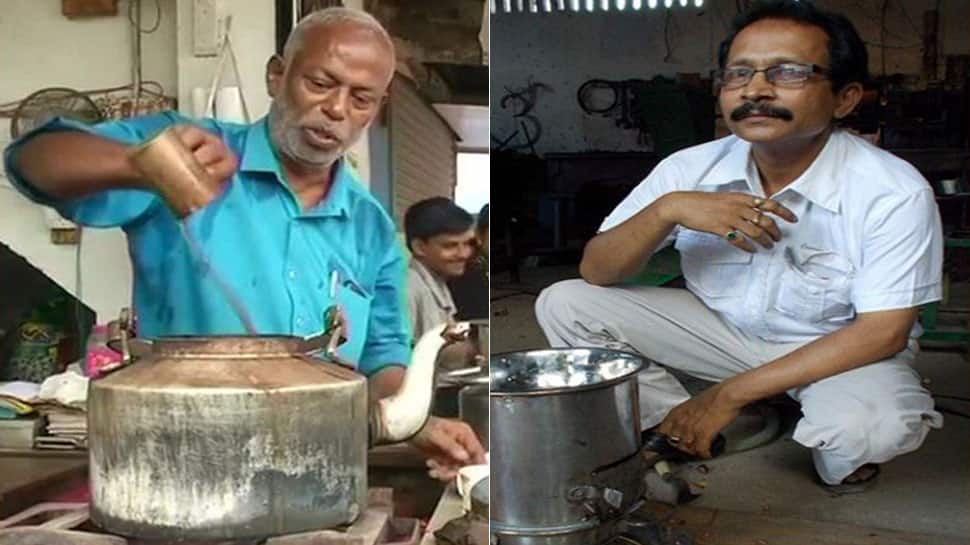 NEW DELHI:  A tea-seller who donates profits for education of slum children, a doctor couple who charge Re 1 from patients and a retired IPS officer who set up a school for a Mahadalit community are among the "unsung heroes" who were given the Padma awards this year.

A villager from Odisha who single-handedly toiled to carve out a three-km-long canal to bring mountain water to irrigate 100 acres of land and a German who looks after 1,200 sick, old and injured cows in Mathura are also among the 112 people who were chosen by the government for the awards, Home Ministry officials said.

Devarapalli Prakash Rao, known as 'chai bechne-wala guru', has been providing education to slum children through the money earned from selling tea.
Rao, who has been working since the age of seven and suffers from lower torse paralysis, contributed half of his income in setting up and running a school -- 'Asha O Ashwasana' -- in Cuttack.

Doctor couple Smita and Ravindra Kolhe have been serving the poor Korku tribals in the Naxalism-affected Bairagad in Melghat district of Maharashtra for the past three decades. They run a clinic and charge a negligible fees of Re 1 and Rs 2 and helped make Melghat a suicide-free zone for farmers.

The Kolhes also developed a fungus-resistant variety of seeds, helped in developing good roads, ensuring electricity and setting up 12 primary healthcare centres in the region.

Smita left a promising medical career in the city to join Ravindra in his mission.

Retired IPS officer Jyoti Kumar Sinha, who had served as secretary at the National Security Council Secretariat, has been providing education to children of the Mahadalit Musahar community post retirement in Bihar.

The Musahar community has a literacy rate of just 3 per cent and for them Sinha has set up an English medium residential school -- 'Shoshit Samadhan Kendra' -- where 320 Musahar students are enrolled from classes 1 to 12.

Daitari Naik is called as "Canal Man of Odisha" as he single-handedly toiled to carve out a three km-long canal to bring mountain stream to water agriculture fields. Carved the canal with hoe and crowbar in four years, the water has reached 100 acres of land around Baitarni village, where there is no water shortage now.

Friederike Irina Bruning, is known as 'gau mata ki aashraydaatri' (one who gives shelter to cows) for her relentless work to look after 1,200 cows in her 'gaushala' in Mathura in Uttar Pradesh for the past 23 years.

She takes care of homeless, abandoned, sick, blind and badly injured cows in her 'gaushala' which is managed through monthly expenses of Rs 22 lakh (for medicine, food, grain and salaries) received through rent from her properties in Berlin.

"Like past few years, this year too, the list of Padma awardees is full of unsung heroes who has been contributing to the society unnoticed," a Home Ministry official said.

Bharali has 118 inventions to his credit like pomegranate de-seeding machine, garlic peeling machine. He has also developed new polythene making machine to cater to demand from tea estates in Assam; helped in increasing income of tea pluckers from Rs 9 to Rs 20 per kg.

Madurai Chinna Pillai, a woman farmer, has pioneered micro-finance in Tamil Nadu through her 'Kalanjiam' movement.

She has established the country's first federation of rural women savings and credit group and also started 'Kalanjiam' community banking programme in the villages of Tamil Nadu, Andhra Pradesh, Karnataka and Puducherry.

Shabbir Sayyad, another recipient of the Padma award, has been taking care of 165 cows in drought-prone Marathawada in Maharashtra.

A second generation cow caretaker from a family of butchers, Sayyad neither sells milk, nor sells cows for meat but only sells cow-dung as manure to farmers, earning a meagre amount of Rs 70,000 yearly.

Anup Ranjan Pandey is the founder of Bastar Band, a theatre group which brings together artists from local tribes.

Spreading the message of love, peace and brotherhood through music in the violence-ridden Bastar, he propagates the message of 'Banduk chhodo - Dhol pakdo' (abandon guns, pick up drums).

Sixty-seven-year-old Mohammad Hanif Khan Shastri is a Delhi-based Sanskrit scholar who has been promoting Hindu-Muslim harmony through his books and poems based on ancient Indian Shlokas. He has written eight books, 700 poems on ancient Indian shlokas.

Saalumarada Thimmakka, a 106-year-old woman from Karnataka, has single-handedly planted thousands of trees over 65 years, taking care of them as her children. She has been spreading awareness about deforestation.

Dagli Muktaben Pankajkumar helps poor blind women to become self-reliant. Founder of CU Shah Pragna Chakshu Mahila Sevakunj, Surendranagar in Gujarat, Muktaben has been working for the cause of persons with disabilities, established an educational institute where 200 blind students are currently enrolled.

Government will take legislative route on Ram temple if court verdict not in favour: BJP leader