The government on Saturday accepted five of 15 key demands of the agitating farmers from Uttar Pradesh following a meeting with their delegation at the Krishi Bhawan in the national capital. 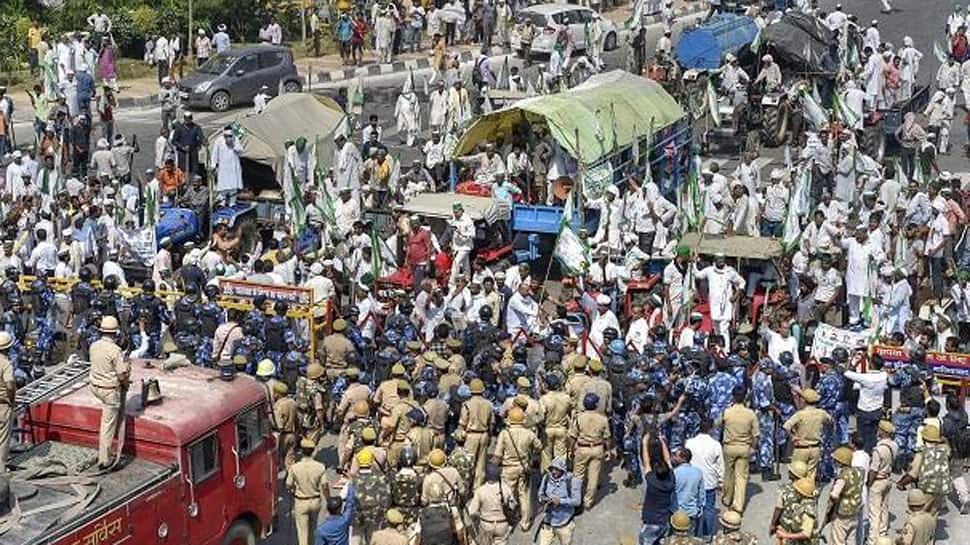 NEW DELHI: The government on Saturday accepted five of 15 key demands of thousands of agitating farmers from Uttar Pradesh following a meeting with their delegation at the Krishi Bhawan (Ministry of Agriculture) in the national capital.

''Government agreed to five of our fifteen demands. The agitation has not been called off, it is just a temporary arrangement, we will meet PM after 10 days for the remaining demands,'' Puran Singh, President of Bhartiya Kisan Sangathan said.

Puran Singh further warned, ''If they (govt) agree to all of our demands we will call off the agitation and if not, we will start an agitation from Saharanpur again.''

Puran Singh, President, Bhartiya Kisan Sangathan on UP farmers march to Kisan Ghat in Delhi: If they (govt) agree to all of our demands we will call off the agitation and if not, we will start an agitation from Saharanpur again. https://t.co/cilijx5dF8 pic.twitter.com/7J60Sqq0SW

The breakthrough came after a delegation of agitating farmers comprising 11 members met senior government officials at the Krishi Bhawan hours after thousands of them marched into Delhi under the umbrella of Bharatiya Kisan Sangh demanding loan waiver, settlement of dues for sugarcane crop and pension.

Heavy police deployment and barricading on the border near Ghazipur, however, prevented the agitating farmers from marching into Delhi to press for their demands.

The farmers' march had started from Saharanpur in Uttar Pradesh on September 11 and was expected to converge at the Kisan Ghat -  the memorial of Chaudhary Charan Singh, a renowned farmer leader, located in heart of national capital. However, the protesters were stopped at the border.

Blaming the Bharatiya Janata Party (BJP) at the Centre and the state for the poor condition of the farm sector as well as the farmers, the Sanghathan had put forward a list of 15 demands.

"We are demanding waiver of all loans on farmers, payment of all sugarcane crop dues within 14 days and implementation of all suggestions of the Swaminathan Committee report," said Rajendra Yadav, Uttar Pradesh in-charge of the Bharatiya Kisan Sangathan.

The farmers are also demanding free health and education for all, a High Court bench in Western Uttar Pradesh, an audit of the power companies by the Comptroller and Auditor General of India, an end to the pension of the MPs and MLAs, and a ban on pollution of rivers and punishment for those who do it.

Meanwhile, Bahujan Samaj Party (BSP) leader Sudhindra Bhadoria on Saturday claimed that the farmers are reeling under poverty and that the government must fulfill their demand in order to uplift them.

The statement from Bhadoria came just hours after scores of agitated farmers started a march towards Delhi on Saturday morning under the umbrella of Bharatiya Kisan Sangh (Indian Farmers` Organisation) to raise various farming-related demands.

"Farmers of this country are in deep financial crisis and their income from the agricultural produce are low, making it difficult for them to survive in this sector.