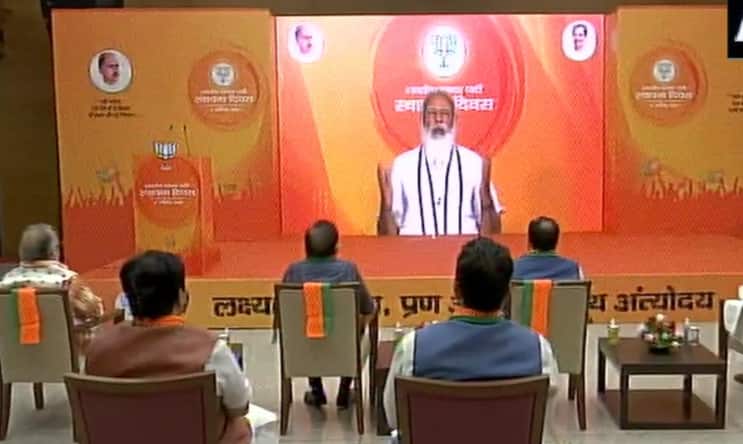 The Prime Minister said, "Our mantra has been "Vyakti Se Bada Dal Aur Dal Se Bada Desh". This tradition continues to this day. We fulfilled Shyama Prasad Mukherjee's vision (of one India), scrapped Article 370, and gave Kashmir the constitutional right."

Virtually addressing the party workers across the country, he said that "false narratives" about his government are spread as part of a big conspiracy to create political instability in the country, and asked BJP members to spread awareness regarding them among the people.

PM Modi said blatant lies like farmers' land will be seized, citizenship of some people will be revoked, the reservation will be scrapped or the Constitution will be changed are spread by certain individuals and organisations, adding that these false narratives have been spread over his government's measures like farm laws, Citizenship (Amendment) Act and labour laws.

He said, "Deliberate politics is behind it. It is a very big conspiracy and its aims is to trigger political instability in the country by creating misconceptions and stoking imaginary fears," and told the BJP members about this "serious challenge".

Opposition parties have criticised the laws on citizenship, and farm and labour reforms over a number of issues, including some of which the prime minister has often rejected as blatant lies.

He also hit out at those who have often dubbed the BJP as an "election-winning machine" over its poll triumphs, and accused them of double standards, saying rival parties and their leaders are lauded when they win. He added that the poor and rural India have embraced the BJP as for the first time they have seen 'antyodaya' (welfare of the most deprived) being realised through a number of schemes.

The BJP evolved from the Bharatiya Jana Sangh which was founded by Syama Prasad Mookherjee in 1951. Later Jana Sangh was merged with several parties in 1977 to form the Janata Party.

In 1980, the National Executive Council of the Janata Party banned its members from being `dual members` of the party and the RSS. It forced the former Jana Sangh members to leave the party and float a new political outfit, and then the BJP came into existence on April 6, 1980.