What is Lahore Declaration

The Lahore Declaration also brought added responsibility to the leaders of both countries to avoid nuclear race, as well as both non-conventional and conventional conflicts. 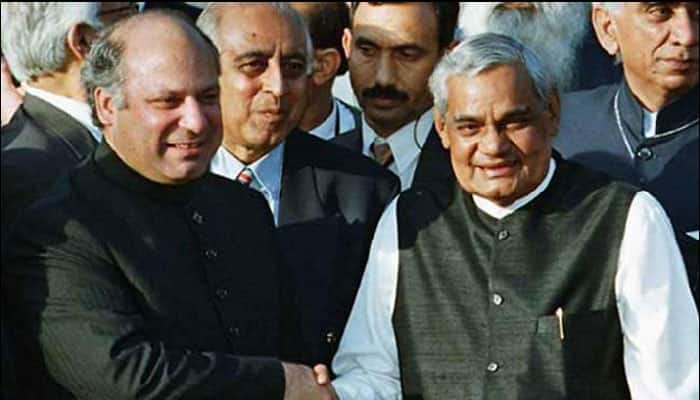 The Lahore Declaration was a bilateral agreement and governance treaty signed by India and Pakistan on February 21, 1999. The treaty was signed by Indian Prime Minister Atal Bihari Vajpayee and his Pakistani counterpart Nawaz Sharif at the conclusion of a historic summit in Lahore. The Lahore Declaration was ratified by the parliaments of both countries the same year.

Under the terms of the treaty, New Delhi and Islamabad had reached a mutual understanding towards the development of atomic arsenals and to avoid accidental and unauthorised operational use of nuclear weapons. The Lahore Declaration also brought added responsibility to the leaders of both countries to avoid nuclear race, as well as both non-conventional and conventional conflicts.

Though Lahore Declaration was widely popular in the public circles in Pakistan and was welcomed by the international community, the relations between India and Pakistan turned sour with the outbreak of the Kargil war in May 1999.

Here is the full text of Lahore Declaration

Sharing a vision of peace and stability between their countries, and of progress and prosperity for their peoples;

Convinced that durable peace and development of harmonious relations and friendly cooperation will serve the vital interests of the peoples of the two countries, enabling them to devote their energies for a better future;

Committed to the principles and purposes of the Charter of the United Nations, and the universally accepted principles of peaceful co- existence

Reiterating the determination of both countries to implementing the Simla Agreement in letter and spirit;

Committed to the objective of universal nuclear disarmament and non-proliferartion;

Convinced of the importance of mutually agreed confidence building measures for improving the security environment;

Recalling their agreement of 23rd September, 1998, that an environment of peace and security is in the supreme national interest of both sides and that the resolution of all outstanding issues, including Jammu and Kashmir, is essential for this purpose;

Have agreed that their respective Governments:

- shall intensify their efforts to resolve all issues, including the issue of Jammu and Kashmir.

-shall refrain from intervention and interference in each other's internal affairs.

-shall intensify their composite and integrated dialogue process for an early and positive outcome of the agreed bilateral agenda.

-shall take immediate steps for reducing the risk of accidental or unauthorised use of nuclear weapons and discuss concepts and doctrines with a view to elaborating measures for confidence building in the nuclear and conventional fields, aimed at prevention of conflict.

-reaffirm their commitment to the goals and objectives of SAARC and to concert their efforts towards the realisation of the SAARC vision for the year 2000 and beyond with a view to promoting the welfare of the peoples of South Asia and to improve their quality of life through accelerated economic growth, social progress and cultural development.

-reaffirm their condemnation of terrorism in all its forms and manifestations and their determination to combat this menace.
shall promote and protect all human rights and fundamental freedoms.

Atal Behari Vajpayee - Prime Minister of the Republic of India

The following is the text of the Joint Statement issued at the end of the Prime Minister, Mr. A. B. Vajpayee's visit to Lahore:

The two leaders held discussions on the entire range of bilateral relations, regional cooperation within SAARC, and issues of international concern. They decided that:

The two Foreign Ministers will meet periodically to discuss all issues of mutual concern, including nuclear related issues.

The two sides shall undertake consultations on WTO related issues with a view to coordinating their respective positions.

The two sides shall determine areas of cooperation in Information Technology, in particular for tackling the problems of Y2K.

The two sides will hold consultations with a view to further liberalising the visa and travel regime.

The two sides shall appoint a two member committee at ministerial level to examine humanitarian issues relating to Civilian detainees and missing POWs.

They expressed satisfaction on the commencement of a Bus Service between Lahore and New Delhi, the release of fishermen and civilian detainees and the renewal of contacts in the field of sports.

Pursuant to the directive given by the two Prime Ministers, the Foreign Secretaries of Pakistan and India signed a Memorandum of Understanding on 21st February 1999, identifying measures aimed at promoting an environment of peace and security between the two countries.

The two Prime Ministers signed the Lahore Declaration embodying their shared vision of peace and stability between their countries and of progress and prosperity for their peoples.

Prime Minister, Atal Behari Vajpayee, thanked Prime Minister, Muhammad Nawaz Sharif, for the warm welcome and gracious hospitality extended to him and members of his delegation and for the excellent arrangements made for his visit.

The Foreign Secretaries of India and Pakistan:-

Reaffirming the continued commitment of their respective governments to the principles and purposes of the U.N. Charter;

Reiterating the determination of both countries to implementing the Shimla Agreement in letter and spirit;

Guided by the agreement between their Prime Ministers of 23rd September 1998 that an environment of peace and security is in the supreme national interest of both sides and that resolution of all outstanding issues, including Jammu and Kashmir, is essential for this purpose;

Pursuant to the directive given by their respective Prime Ministers in Lahore, to adopt measures for promoting a stable environment of peace, and security between the two countries;

Have on this day, agreed to the following:-

The two sides shall engage in bilateral consultations on security concepts, and nuclear doctrines, with a view to developing measures for confidence building in the nuclear and coventional fields, aimed at avoidance of conflict.

The two sides undertake to provide each other with advance notification in respect of ballistic missile flight tests, and shall conclude a bilateral agreement in this regard.

The two sides are fully committed to undertaking national measures to reducing the risks of accidential or unauthorised use of nuclear weapons under their respective control. The two sides further undertake to notify each, other immediately in the event of any accidential, unauthorised or unexplained incident that could create the risk of a fallout with adverse consequences for both sides, or an outbreak of a nuclear war between the two countries, as well as to adopt measures aimed at diminishing the possibility of such actions, or such incidents being misinterpreted by the other. The two side shall identify/establish the appropriate communication mechanism for this purpose.

The two sides shall continue to abide by their respective unilateral moratorium on conducting further nuclear test explosions unless either side, in exercise of its national sovereignty decides that extraordinary events have jeopardised its supreme interests.

The two sides shall conclude an agreement on prevention of incidents at sea in order to ensure safety of navigation by naval vessels, and aircraft belonging to the two sides.

The two sides shall periodically review the implementation of existing Confidence Building Measures (CBMs) and where necessary, set up appropriate consultative mechanisms to monitor and ensure effective implementation of these CBMs.

The two sides shall undertake a review of the existing communication links (e.g. between the respective Directors- General, Military Operations) with a view to upgrading and improving these links, and to provide for fail-safe and secure communications.

The two sides shall engage in bilateral consultations on security, disarmament and non-proliferation issues within the context of negotiations on these issues in multilateral fora.

Where required, the technical details of the above measures will be worked out by experts of the two sides in meetings to be held on mutually agreed dates, before mid 1999, with a view to reaching bilateral agreements.

(K. Raghunath)
Foreign Secretary of the Republic of India

(Shamshad Ahmad)
Foreign Secretary of the Islamic Republic of Pakistan