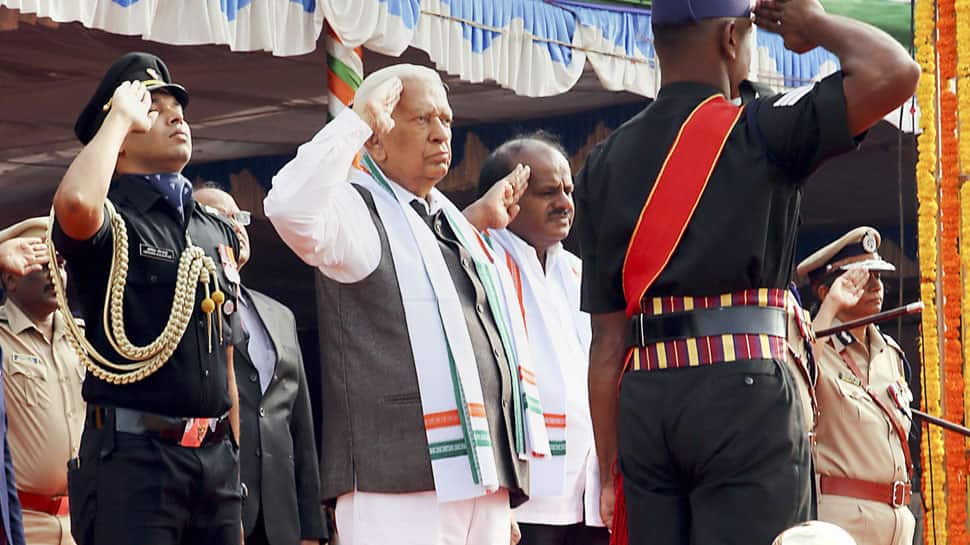 KARNATAKA: Karnataka on Saturday celebrated the 70th Republic Day with pomp and pageantry marking the patriotic fervour of the people across the state. In the state capital here Governor Vajubahia Vala unfurled the tricolour at the Field Marshal Sam Manekshaw parade ground amid tight security.

An Army helicopter showered rose petals, welcoming the the dignitaries and the public at the venue before the Governor hoisted the national flag and inspected the guard of honour. About 5,000 people, including women and children, flocked to the ground to celebrate the event and witness the colourful march past and cultural programmes, including songs and dances on patriotic themes.

After the military band rendered the National Anthem on a chilly day under a partly cloudy sky, Vala inspectedthe guard of honour by the men and women of the three services and the state police.

About 20 contingents of the Army, Navy and Air Force, the state and central police forces, National Cadent Corps (NCC) and Bharat Scouts and Guides participated in the parade and received the salute from the Governor.

The contingents were led by the parade commander, Major Prashanth Thapa, and the second-in-command, Major Amit Choudhary. The state`s anthem, penned by Padma Vibhusan poet Kuvempu was also played in Kannada on the occasion.

Chief Minister H.D. Kumaraswamy, cabinet ministers, legislators, officials and city Mayor Gangambike Mallikarjun attended the event. In a 20-minute Republic Day address in Hindi, the Governor highlighted the vision and achievements of the southern state over the past four years since he assumed office in 2014.

"Four years ago, when I delivered my first Republic day address from the very same dais, I expressed hope that Karnataka would overcome many challenges and be on the path of progress," said Vala. After the military and police bands played patriotic songs, the audience was treated to an hour-long cultural programme.

About 2,000 boys and girls from state-run schools and junior colleges in the city enacted patriotic and cultural shows, including one on the 1999 Kargil War ("Kargil katha") and "Our India and Bright India" ("Namma Bharat, Bright Bharath").

Dog squads of the military and the state police were the star attraction, drawing special applause from the audience.

The day marked the date when the Constitution was adopted by the then Constituent Assembly and the country became a republic two years and five months after India got its independence on August 15, 1947 from the British. The Constitution replaced the Government of India Act, 1935.

According to reports from districts across the state, the day was celebrated with gaiety and patriotic fervour after the chief guests hoisted the national flag and impressive parades were held.