As Sunny Deol campaigns for BJP in Barmer, 'Gadar' dialogues being played in background

Sunny Deol has been declared as BJP candidate from the Gurdaspur Lok Sabha seat, 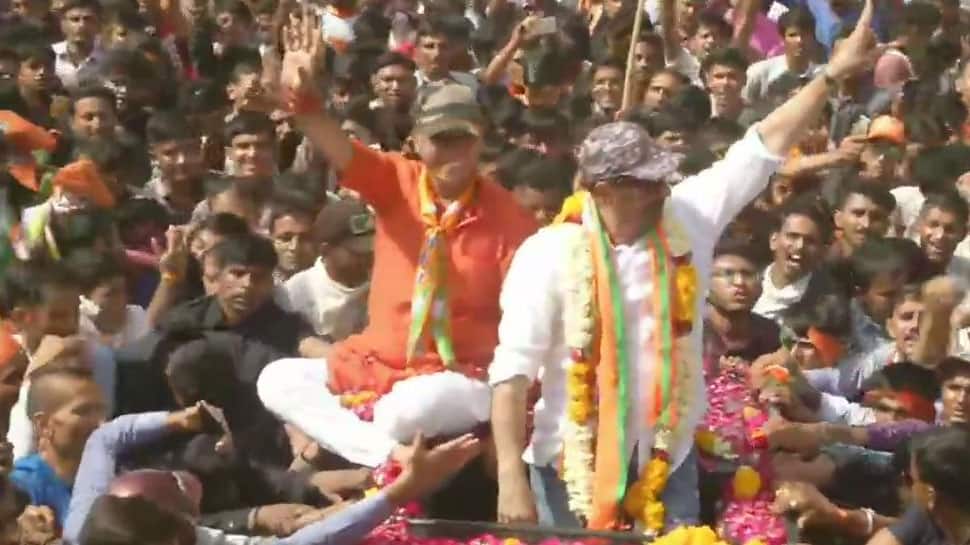 BARMER: Silver screen actor Sunny Deol, who recently joined the BJP, held his first roadshow in Rajasthan's Barmer on Saturday during which he campaigned for party candidate Kailash Choudhary.

According to news agency ANI, Deol's roadshow was a major crowd puller as hundreds of people gathered to see Bollywood's most popular action hero.

Deol is campaigning for Kailash Choudhary, who has been pitted against Congress candidate Manvendra Singh from the Barmer Lok Sabha constituency in Rajasthan.

While Deol campaigned for his party candidate, dialogues from his blockbuster movie 'Gadar', "Hindustan zindabad tha, zindabad hai, zindabad rahega" were being played in the background.

Deol has been declared as the BJP candidate from the Gurdaspur Lok Sabha seat – a move which reportedly irked late actor Vinod Khanna's family since he had represented the party for many years in Lok Sabha.

However, Khanna's wife Kavita later said that she will not make the ''denial of ticket to her by BJP'' a personal issue and will support PM Narendra Modi in the 2019 Lok Sabha election.

''It is my decision that I'm not going to make this a personal issue and make a personal sacrifice and put my entire might and support with Prime Minister Narendra Modi,'' Kavita said.

BJP had on Tuesday released its 26th list of candidates for three parliamentary constituencies in Chandigarh and Punjab.

It fielded Sunny Deol from the Gurdaspur and another actor-turned-politician and sitting MP Kirron Kher from Chandigarh.

Talking to media after formally joining the BJP, Sunny Deol hailed Prime Minister Narendra Modi and said that he has decided to join the BJP as he wants to work for the welfare of the country with PM Modi.

"I am here to work with and support Modi Ji. My work will do the talking," Sunny told reporters.

It may be recalled that Sunny, 62, had recently met BJP president Amit Shah at Pune airport and the meeting had sparked speculations that the Bollywood star would join the BJP soon.