Sunny Deol said creating employment opportunities for the youth will be his main priority. 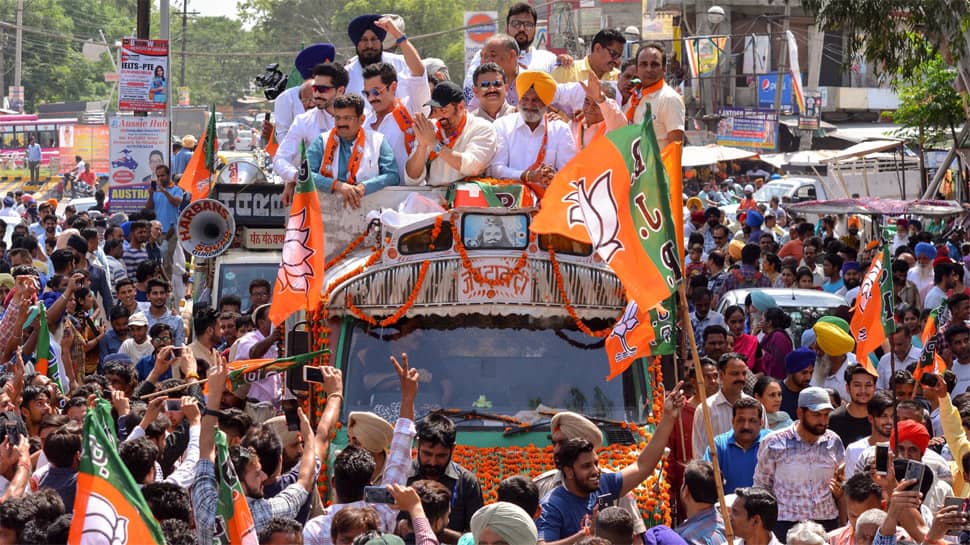 Before hitting the campaign trail, Sunny Deol offered prayers at the Gurdwara Dera Baba Nanak and also had a glimpse of historic Gurdwara Kartarpur Sahib in Narowal district of Pakistan through binoculars installed at the 'darshan sthal' here.

Kartarpur Sahib is located across the river Ravi, about four kilometres from the Dera Baba Nanak shrine.

He also went to Prachin Shiv Temple in Kalanaur here and performed 'pooja'. It was a tough time for security personnel to tackle the crowd keen to meet the Bollywood actor and get photos clicked with him.

Talking to reporters, Sunny Deol said creating employment opportunities for the youth will be his main priority.

"The most important issue is our youth. Youth is our foundation. I want to create job opportunities for them," he said in his first media interaction after being named as the BJP candidate for the Gurdaspur seat.

Sunny Deol, the national award winner for his movies "Ghayal" and "Damini", said he wanted to work for the welfare of the farmers. "We belong to Punjab and farming is in our blood. I want to understand all their issues and do whatever is possible for their welfare," the actor said.

The actor-turned-politician took out a roadshow from Gurdaspur to Pathankot.

His fans and supporters jostled to have a glimpse of him. People showered flower petals and garlands to welcome Sunny Deol, who raised slogans of 'Jo bole so nihal' and 'Bharat Mata Ki Jai'.

He was accompanied by his younger brother and actor Bobby Deol. Several BJP leaders, including former Punjab BJP chief Kamal Sharma and Akali leader Gurbachan Singh Babehali, were also part of the roadshow. However, there was no senior leader from Akali Dal present. "We are happy to be here and we are very happy for getting such a response. We are getting a lot of love and we will continue to get the same," Bobby told reporters here.

Sunny Deol had returned to Gurdaspur from Mumbai on Wednesday and met families of martyrs at Shadipur village in Dinanagar here.

"I have already said that you stay in my heart. I want to work towards meeting all your needs and requirements. I am not saying just for the sake of making statement. I want everyone to be happy and have a smile on their face," he had said on Wednesday night.?

The Gurdaspur constituency is represented by Congress MP Sunil Jakhar who had won the seat in the 2017 bypoll, which was necessitated after the death of Vinod Khanna in April that year.
All the 13 seats of Punjab will go to polls on May 19.